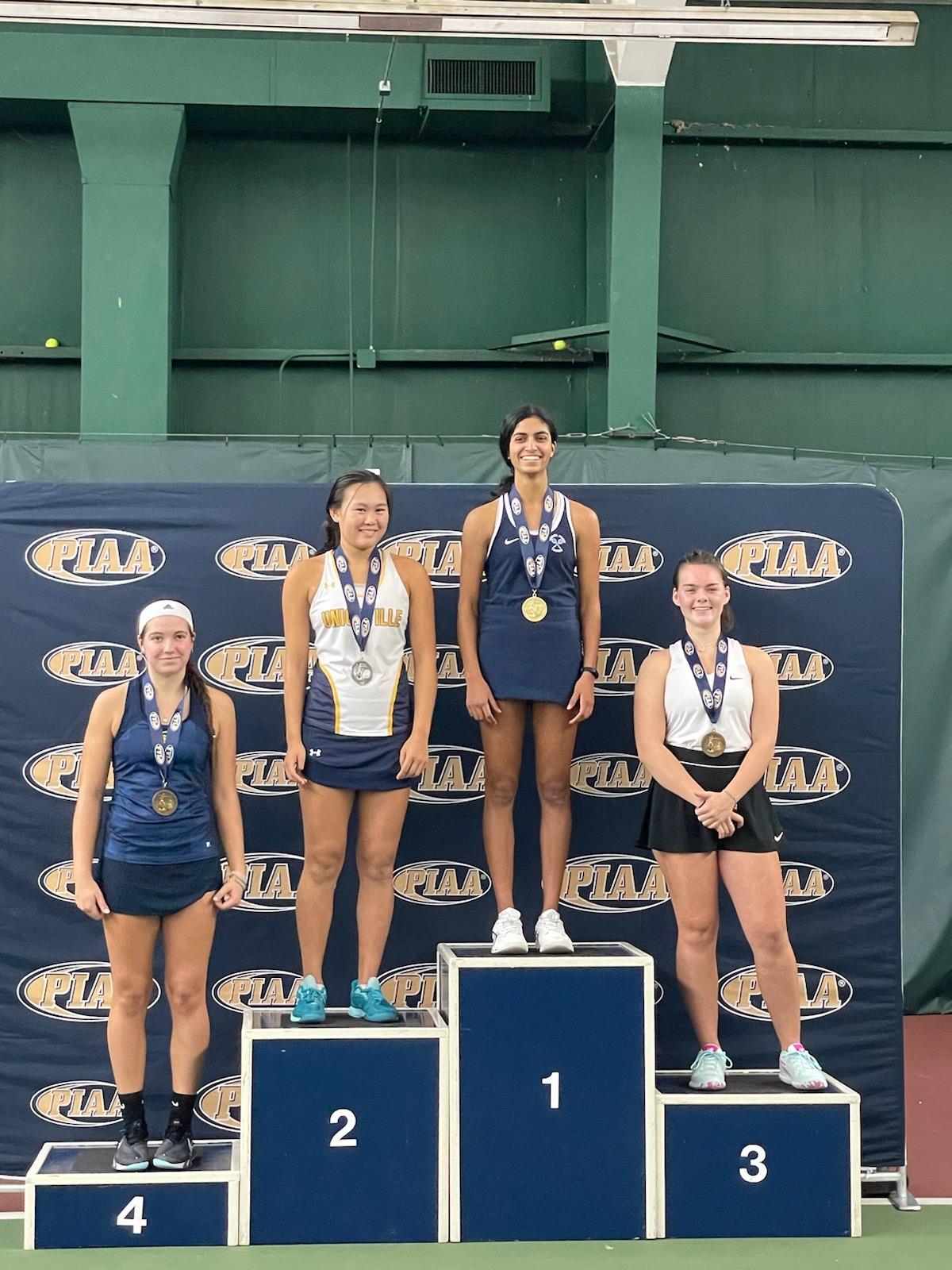 It was double trouble for District 1 tennis at the PIAA Championships on Saturday in Hershey. North Penn junior Esha Velaga continued her torrid season, not dropping a set for the enitre PIAA Tournament, topping Unionville’s Grace Li 6-3, 6-3 in the finals. Joining her on the medal stand was another local representative as Methacton’s duo of senior Alice Liang and sophomore Hana Nouaime also had a near perfect tournament, not dropping a set as well.

Liang and Nouaime defeated Conestoga’s Ananya Krishan and Leena Kwak 6-3, 6-4 in the finals.

It was a bit of redemption for the Warriors duo, who had lost in the state finals last season.

“I really felt tingly about it,” said Methacton coach Jill Walker of her team’s chances entering the tourney. “A few other people and coaches came up to me and were so positive about them, how they play doubles. I felt real positive about it.”

For North Penn’s Velaga it was just business as usual as she lost just 15 games in four matches. She defeated Manheim Township’s Kayla Kurtz 6-0, 6-1 in the first round and Bella Peters of Abington Heights 6-2, 6-3 in the second round on Friday. Saturday began with a 6-2, 6-1 win over CR South’s Dasha Chichkina and then a 6-3, 6-3 win over Unionville’s Grace Li, a rematch of the district final.

“I definitely had more nerves for states just because for districts I was already going to states,” Velaga said.

“Here, I really wanted to win.”

Liang and Nouaime began play with a 6-2, 6-0 win over New Oxford’s Anya Rosenbach/Allison Horick and followed it up with a 6-1, 6-2 victory over Shady Side Academy’s duo of Elana Sobol/Rachel Nath on Friday.

The defending state finalists then had a pair of District 1 battles, first defeating Pennsbury’s Megan Walsh and Kyra Workman 6-2, 7-5 in the semfinals. That all led up to the rematch with Conestoga’s Leena Kwak and Ananya Krishnan, the four all friends who train together.

It wasn’t quite the three-set marathon of the district finals, but a 6-3, 6-4 score which wasn’t exactly a walk in the par.

“The score doesn’t reflect how nervewracking it was,” Liang said. “They had a lot of people behind them, we felt their presence. Our district final helped us out a lot. We were mentally tough.”

When the Warriors got another break in the second, things were going Methacton’s way. But serving for the match at 5-3, Methacton was broken.

“All the games were so close, all four of us should be happy with how we played,” Nouaime said. “We are friends with them, we train with them.”

At 5-4, the Warriors called on their mental reserve and a trip down memory lane to the district doubles final. They got the break and there was no second place this year.

“We felt a lot of relief,” Liang said. “You are really nervous the whole time. We worked really hard, we felt a lot of emotions. We looked up at all of our coaches and it felt great.”