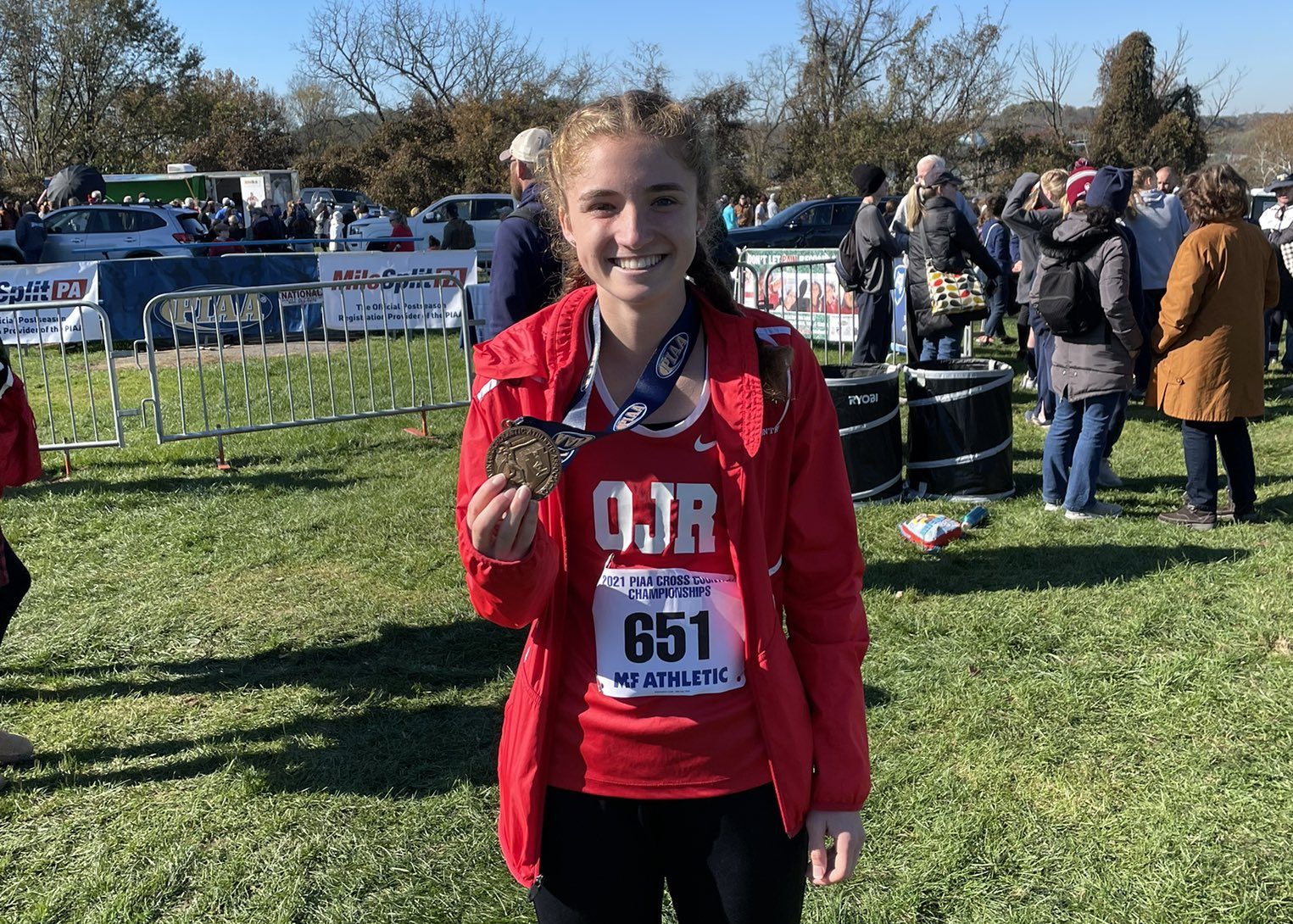 HERSHEY >> They never met a hill that could slow them down.

Certainly not the two most prominent ones on the Parkview Course, where the Pennsylvania Interscholastic Athletic Association (PIAA) holds its state cross-country meet. Drawing on past experience, Claire Zubey and Gianna Cagliola climbed both the hills and the finishing order to record Top 10 outings Saturday. Zubey placed third in the girls Class AAA event while Cagliola came in sixth in the AA race.

Zubey covered the course in 18:28.4, behind race winner Mia Cochran (Moon Area) at 18:08.5. The Roberts junior, 11th in 2020 with a 19:46 clocking, noted she went out “more controlled” and used the hills — one at the one-mile mark, the other prior to the finishing straightaway — to her advantage.

“I was strong the last mile,” she said. “It was a spot where I made sure I didn’t go out too fast.”

Cagliola took the same approach in the AA race. The Pope John Paul II, a veteran of five previous events at Parkview, jumped from a 40th-place run to a spot in the Top 20 on the one-mile hill.

“Once you go up that hill, it separates people,” she noted. “There were around 25 runners I picked off.”

Cagliola, coming off a second straight first in last weekend’s District 1-AA race, finished with a time of 19:45.3 … a significant improvement from the 2020 meet, when she was 22nd in 21 minutes.

“That was one of my goals this season, to place in the Top 10,” she said. “I trained super-smart.”

Summer Watts came in 49th for the Vikings while Emerson Whetstone was 94th. Owen J’s other leading runner was Abby Norton, who placed 93rd.

Methacton, which qualified for states as a team the first time in program history. got a 22nd-place effort from Vaughn Lackman (16:35.3). The Warriors finished 13th in the team standings with help from Chris McGlynn (86th) and Bryan Landsberg (93rd).

The Phoenixville boys got an 80th-place showing from Bryan Kerchner and a 97th from Yash Agnihotri.

With their high-school meet schedules completed, both Zubey and Cagliola indicated they’re looking to compete in the Eastbay Cross Country Northeast Regional race coming up the weekend of Nov. 27.

The race will be held in VanCortland Park in Bronx, N.Y.