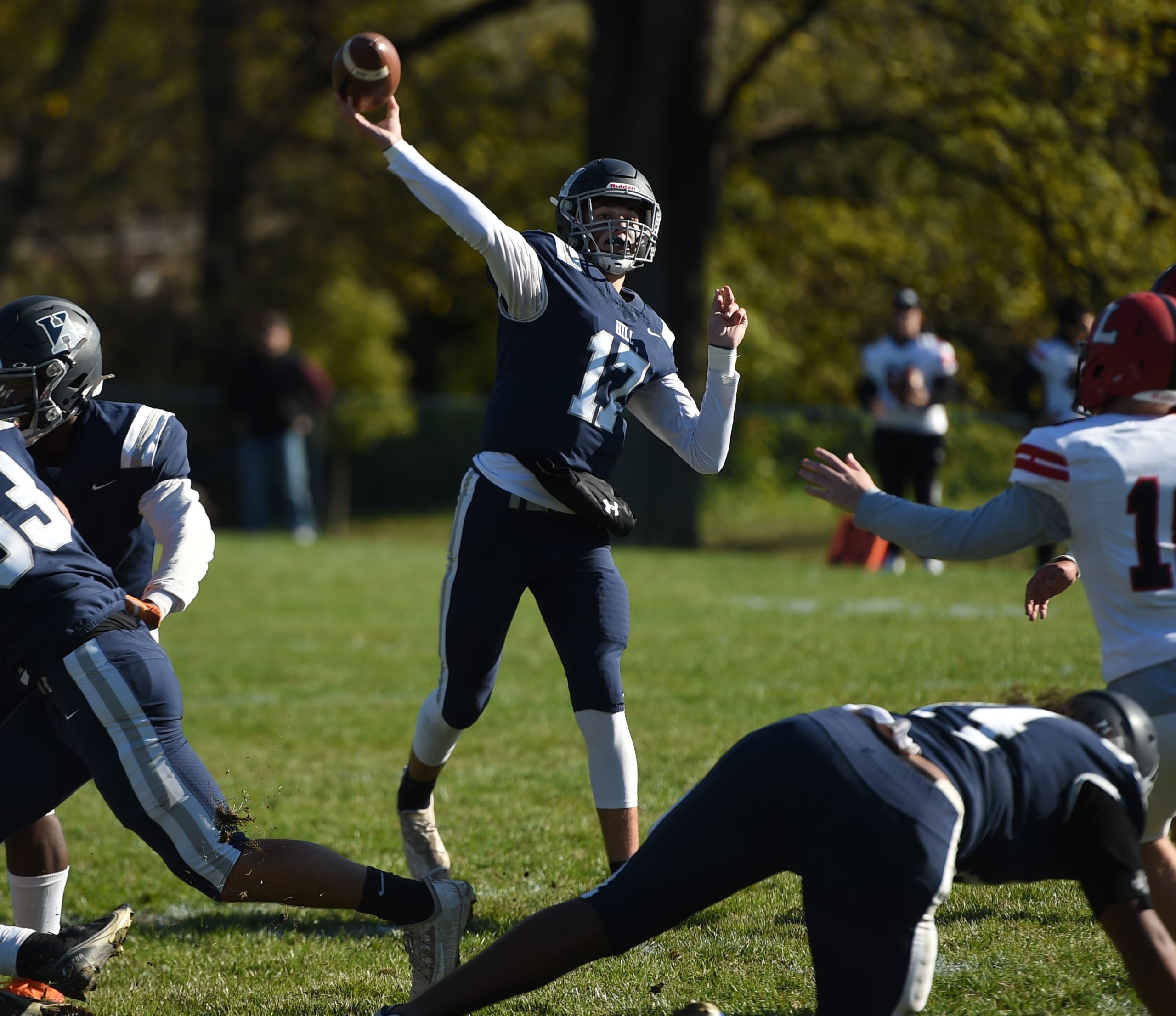 POTTSTOWN >> For The Hill School, nothing that had happened prior to Saturday’s season finale really mattered as it hosted Lawrenceville School in the fifth oldest high school football rivalry in the country.

And after a fierce defensive battle throughout the afternoon, The Hill finally hit pay dirt to take a late lead and then hung on for a 10-6 win. Charles Hewitt tossed a 28-yard touchdown pass to Quint Craig with 3:55 remaining to give the Rams (3-6) the 10-6 advantage. Then Craig intercepted a pass on the next Big Red possession and Jake Voynar picked off another at The Hill goal line in the final seconds to preserve the win.

Craig caught four passes for 60 yards as Hewitt went 11-for-20 for 110 yards and Max Elmore booted a 24-yard field goal for the Rams. Gary Lewis caught five passes for 132 yards for Lawrenceville (3-5), including a 42-yarder for a touchdown from Peyton Cosover to open the scoring in the first quarter.

“That was one of our mottoes going in … forget the past,” said Craig,a junior from Chester Springs. “For the seniors, this is amazing. It’s good to add on a win. We’ll keep growing. You can’t ask for anything else.”

“At halftime, coach says, who wants it more,” said junior running back Kayden White, a junior transfer from Pottsgrove. “We had an amazing week of practice.”

Lawrenceville took its 6-0 lead when Cosover hit Lewis on the long scoring play with 5:36 remaining in the opening quarter.

“Broken coverage,” said Craig.”But we kind of buckled down. We were fine, made our adjustments as needed. We felt in control on defense the entire game. I never lost confidence. The team didn’t lose confidence.”

“Everybody was doing their assignments exactly how they should,” senior Charles ‘Pat’ Patterson said concerning the Ram defense.”Everybody was flying to the ball. There were no mental breaks.”

Elmore got the Rams on the board with his field goal with 2:21 remaining before the half.

Then the defensive battle continued after the break as the Rams were stopped on downs at the Big Red 18-yard line on their first possession. Lawrenceville missed a 34-yard field goal attempt midway through the fourth quarter after a 51-yard pass completion to Lewis advanced the visitors to the 17.

That gave the Rams the ball at the 20 with 6:04 to go. A 31-yard reception by Craig a few plays later advanced the ball to the Big Red 27. Then on a 3-and-11 play, Hewitt threw the ball down the right sideline over the defense and hit Craig in stride in the end zone for the go-ahead score.

“A perfect throw,” said Craig. “He put it right on the bread basket.”

Then Luke Pickard sacked Cosover for an 8-yard loss and Craig battled Lewis for the ball on the next play and came away with the interception.

“He’s definitely a really good player,” said Craig. “They kept running the same play and we adjusted. It was a 50-50 ball and I happened to come down with it.”

Lawrenceville forced a punt and took over at its own five with 1:28 left and quickly moved down the field on a pass interference penalty, a 38-yard pass to Lewis and a 22-yard completion to Jack Betten to The Hill 24.

After an incomplete pass with 31 seconds to go, Cosover tried to hit Betten again, but this time Voynar won the battle to clinch the win.

“The closest I can think of is the sellout against PJP (Pope John Paul II) my freshman year,” White said concerning the excitement of the 124th meeting between the teams since 1887. “Nothing compares to the energy at Hill.”

“This really brings up the morale of the team,” said Patterson, who racked up a 6-yard sack on Lawrenceville’s final drive. “It basically erases the entire season.”

The Rams had lost four in a row coming in, but White thinks the win will be a big boost.

“A lot of momentum going into the off-season,” he said. “Lifting and workouts … we know what we need to do.”