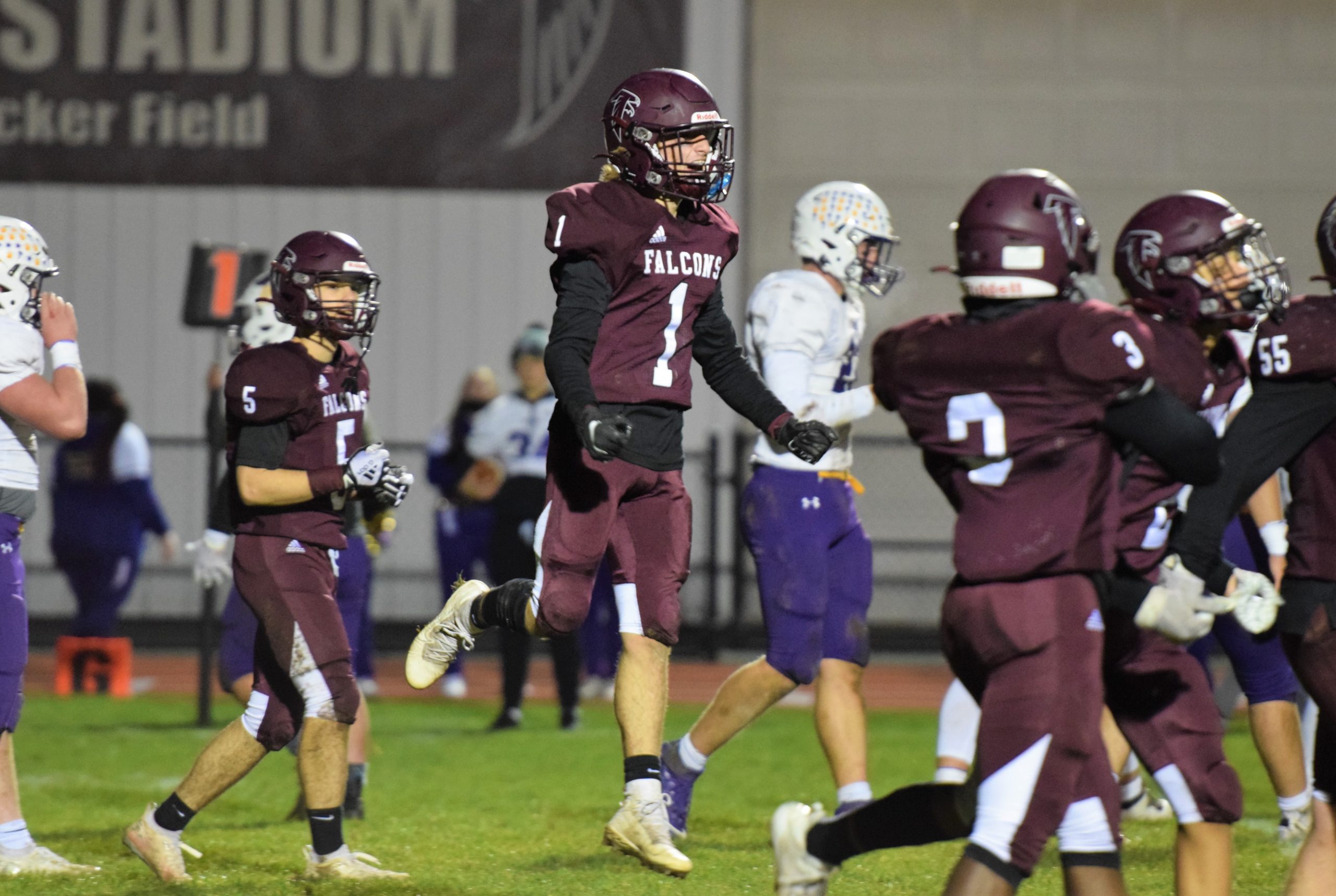 Pottsgrove's Bryce Caffrey (1) celebrates after his fumble recovery in the end zone against Upper Moreland in a District 1-4A playoff game Friday. (Austin Hertzog - MediaNews Group)

“Special teams are a third of the game.”

It’s an old coach’s mantra, meant to remind players not to let down just because the offense and defense are on the sidelines. Those “hidden yards” on special teams have made the difference in many a win or loss.

It was precisely that type of team-wide effort that propelled Pottsgrove to a 34-12 victory over Upper Moreland in the District 1 Class 4A semifinal at Pennypacker Field on Friday.

Pottsgrove quarterback Ryan Sisko rolls out as he gets a big block from Max Neeson (33). (Austin Hertzog – MediaNews Group)

Seniors Max Neeson and Vinny Scarnato each scored a pair of touchdowns, while the defense forced three turnovers and the special teams unit blocked a punt for Pottsgrove. Landon Shivak added field goals of 27 and 39 yards.

The victory sends the Falcons (8-2) into next week’s championship game at No. 1 Bishop Shanahan, a 21-0 winner over Chichester on Friday. Next week’s winner moves on to meet the District 12 (Philadelphia) champion.

This fall at Pottsgrove, the special teams have made plenty of big plays on their own, but perhaps more importantly have put the offense in position to make plays of their own that have made all the difference in some tight victories, such as they did in last week’s 14-13 win at Spring-Ford that allowed the Falcons to qualify for the postseason and host Friday’s game.

This week, the decisive first half followed a theme — a timely special teams play followed by a big run to set up Pottsgrove scores. But it was the defense that struck the biggest blows, causing a pair of turnovers and highlighted by a pair of goal line stands in the second quarter.

The Falcons rushed for 269 yards, led by Amir Brunson’s 83 yards and QB Ryan Sisko’s 73 on the ground. Sisko added 68 yards and two scores to Scarnato and Neeson through the air.

“From a leadership aspect, we’re just trying to show the younger guys how to do it,” said Sisko. “Just like last week, we weren’t affected by the weather. We just came out, got the job done.”

Coming in as the No. 2 seed and home team, Pottsgrove took advantage of good field position off a pooch kick — Upper Moreland choosing to avoid kicking off to junior Amir Brunson, who’s returned several kicks for scores this season — sending Vinny Scarnato on a jet sweep that went 56 yards for a score less than a minute into the contest.

After a short Upper Moreland punt, Falcons QB Ryan Sisko kept on a read and carried the ball 48 yards deep into Golden Bears territory, where it took all four downs before fullback Max Neeson pounced on his own fumble in the end zone to double Pottsgrove’s lead.

Next came Brunson’s turn to break a long run, with only a horse-collar tackle preventing him from his own long scoring carry. The Falcons took advantage on the first play of the second stanza, however, as Sisko’s first pass of the evening was on the money, finding Scarnato on a post for 14 yards and a 21-0 advantage.

But it was the Pottsgrove defense who effectively put the game out of reach, stopping Upper Moreland on consecutive goal-line stands midway through the second quarter. Cameryn Johnson’s 49-yard run gave Upper Moreland its best chance of the opening half, but the Falcons stuffed four consecutive chances inside the five-yard line.

The Falcons, however, would fumble it right back to UM on their own five-yard line — but Neeson was part of a group of Falcons who combined to strip the ball from the Golden Bears on the ensuing play, with Pottsgrove pouncing on the miscue for a touchback. Shivak added the first of his two field goals to make the halftime lead 24-0.

“I felt pretty bad after fumbling it away,” admitted Neeson, “So it’s a great feeling to stay on the field and get the ball right back. It gave us the boost we needed.”

After the break, it was the special teams setting up the offense again as Marc White got a hand on a punt deep in Golden Bears territory. The Falcons took over at the Upper Moreland 19-yard line, where Sisko found Neeson wide open on a swing pass for the fullback’s second score of the night.

Cameryn Jackson got the Golden Bears on the board with a 65-yard run — the highlight of his 143-yard evening — late in the third quarter. Byron Hopkins added another score with only seconds remaining in the contest.

Upper Moreland saw its season end at a mark of 7-4.

“This senior class, they’ve been our rock stars,” said Golden Bears coach CJ Szydlik. “We were up against it tonight, we’ve had a couple of tough weeks in a row. But all credit goes to Pottsgrove.

“I’m proud to be [Upper Moreland’s] coach. This is a great bunch of kids who’ve given me a lot to be proud of.”

For the Pottsgrove seniors, who began their high school careers as freshmen on the last District title team at the school, there’s only one way they can see culminating those careers.

“[A District title] would mean the world to me,” summarized Neeson. “We saw the seniors last year, who didn’t get a shot. I want to do this for those guys, who didn’t get a chance, and for myself and my friends. It’s something we’d never forget.”

Steich directs Quakertown past Souderton in District 1-6A first round
Susi, Ortega spark rout of OJR to add to Coatesville’s playoff success