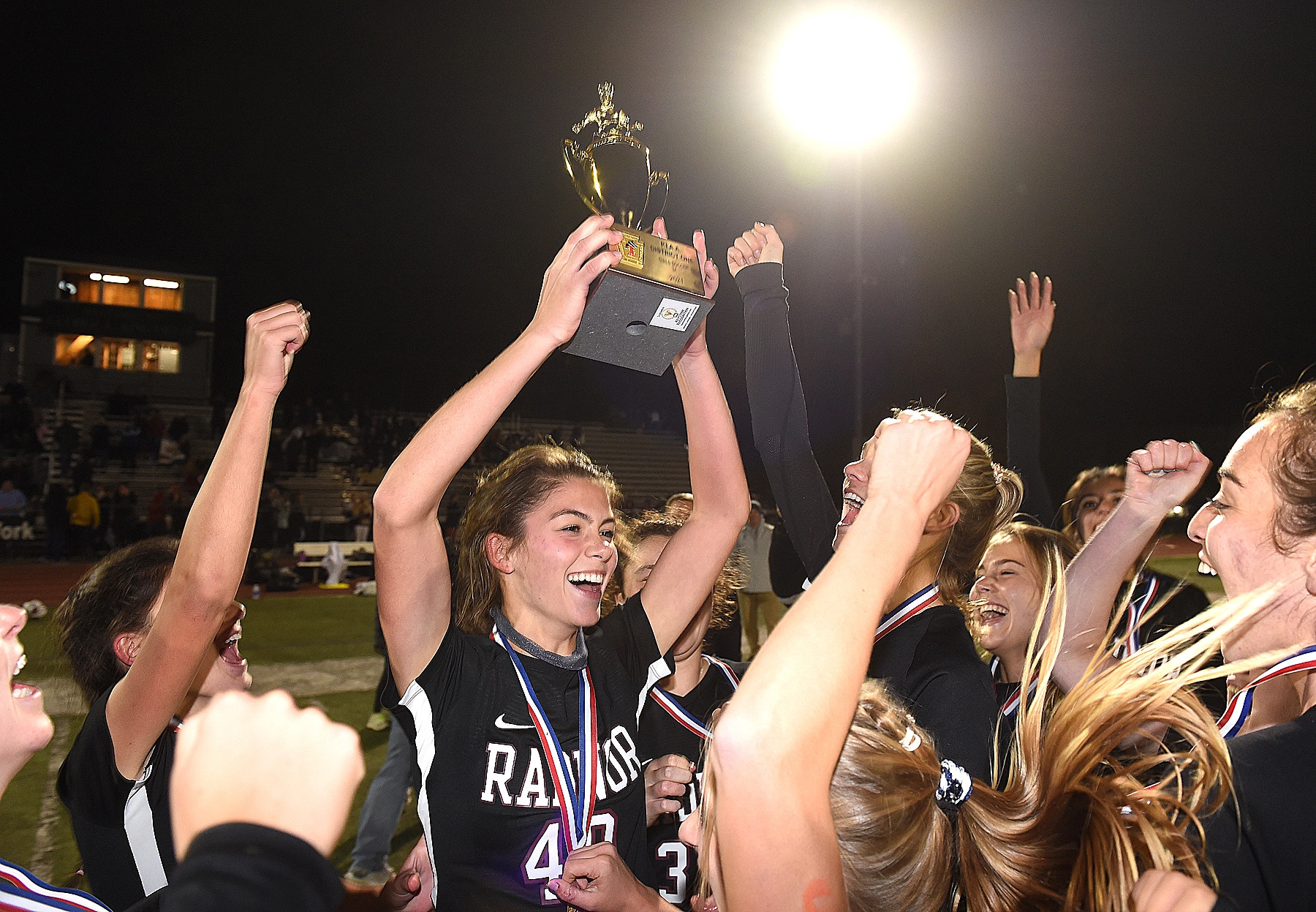 NETHER PROVIDENCE – When Selah Koleth headed to the bench with eight minutes to play Thursday night, the dog pile on the Radnor sideline offered important practice.

The sophomore midfielder had done her part, with two authoritative finishes inside the box. All that remained, as the Radnor reserves subbed in to get young players a taste of a District 1 final, was the anticipation of the celebrations after the final whistle on the turf at Strath Haven’s George L. King Field.

Koleth scored twice, and the freshman-to-freshman connection of Ivy Chaskelson to Olivia Jacobs put the icing on the cake as the top-seeded Raptors upended perennial powerhouse Villa Joseph Marie, 3-0.

Villa Joseph’s Adriana Houtz, left, and Radnor’s Selah Koleth battle for a ball in the first half of the District 1 Class 3A final at Strath Haven Thursday evening. (PETE BANNAN – DAILY TIMES)

“It’s kind of like the reward,” Koleth said of the joyous mob that awaited her at the bench. “It’s a really, really great feeling. It makes me feel so accomplished. There’s just so much happiness.”

The district title is the first for Radnor (17-4) since 2000. Both finalists qualify for the PIAA Class 3A tournament starting next Tuesday, with Radnor awaiting the third seed from District 3.

Radnor’s recipe was the same as ever: Stoutness down the middle of the pitch and flair up top. Like in the semifinal, the central midfield pair of Kate Boujoukos and Emily Daiutolo dictated the game. Where that game was scoreless for nearly 70 minutes until Jacobs scored, Koleth struck in the ninth minute in the final.

Jane Daiutolo played a perfectly weighted ball into the left channel to spring Koleth and cut out two defenders. Koleth hit a shot hard and low with her left foot toward the far post, leaving goalie Mackenzie Van Arsdale no chance.

“We’ve been practicing through balls a lot at practice, and so Jane just played me a really nice ball through,” Koleth said. “I took a couple of touches and shot back post.”

Jane Daiutolo was the architect of the second goal as well, Koleth finding the ball in a sea of legs in the box, taking the extra touch with her superb close control and technique and lashing a high shot into the back of the net.

For those keeping track, that’s four goals in two games from sophomores and freshmen, reflecting a dynamic that has been at the heart of Radnor’s success.

“I think it is our tight-knit bond,” senior left back Julie Breedveld said. “We all trust each other, and they know ever if they mess up, the seniors are here for them. I think it’s everything that we’re such good friends. It’s not a seniority thing. I think we all fit together on the team.”

Radnor forward Olivia Jacobs breaks away from a pair of defenders on the way to the third goal in a 3-0 win for the Raptors in the District 1 Class 3A final Thursday. (PETE BANNAN – DAILY TIMES)

“I think it’s really amazing,” Koleth said. “We’re showing that you don’t have to have seniority to score goals, and it also shows that we have a really bright future ahead of us with lots of new girls coming in. I think it’s going to be really great.”

Radnor’s defense controlled VJM’s dangerous attack. They’ve outscored opponents 6-0 in their three playoff wins. Physical forward Emma Hagan had Tellian Schwarz on her back the entire way. Breedveld and Sydney O’Shea provided escape valves at outside back. Their uncommon poise on the ball, combined with Emily Daiutolo’s ability to drift into pockets and switch the field with her distribution, Radnor was rarely put under pressure. When it was, they usually defused the situation either with a physical Boujoukos tackle or a heady Daiutolo recovery sprint.

Goalie Mallory Toomey made just two saves. One just before Koleth opened the scoring was on a speculative drive from 30 yards by Hagan. She also collected a floated free kick by Kiley Johnson early in the second half that gave her no trouble.

No 2 seed Villa Joseph Marie (13-5-2) had its best chance in the waning seconds of the first half on a rare Radnor defensive misstep. But center back Olivia Kelley recovered well, and Becca Morein’s effort from a tight angle down the left wing sailed over the bar and through the football uprights.

Van Arsdale made three saves to keep the Gems in it as long as they were. Her best of the day, on the half-hour mark, denied a perfect counterattack that wended through Emily Daiutolo to Koleth to Jacobs, whose first-time volley was beaten away.

Breedveld isn’t a stranger to high school trophies, one of several Raptors who won a state lacrosse title last year. This one, though, feels a little different. Lacrosse success has become expected at Radnor. To build a soccer program almost from the ground up under Jake Solderitsch, with players that have weathered the bottom half of the Central League as underclassmen to become district champs as seniors, that’s special in a unique way.

“I think since our freshman year we can see our program has grown,” Breedveld said. “We’ve all helped to grow our program. So the underclassmen have stepped up, and we’ve all built a great program.”