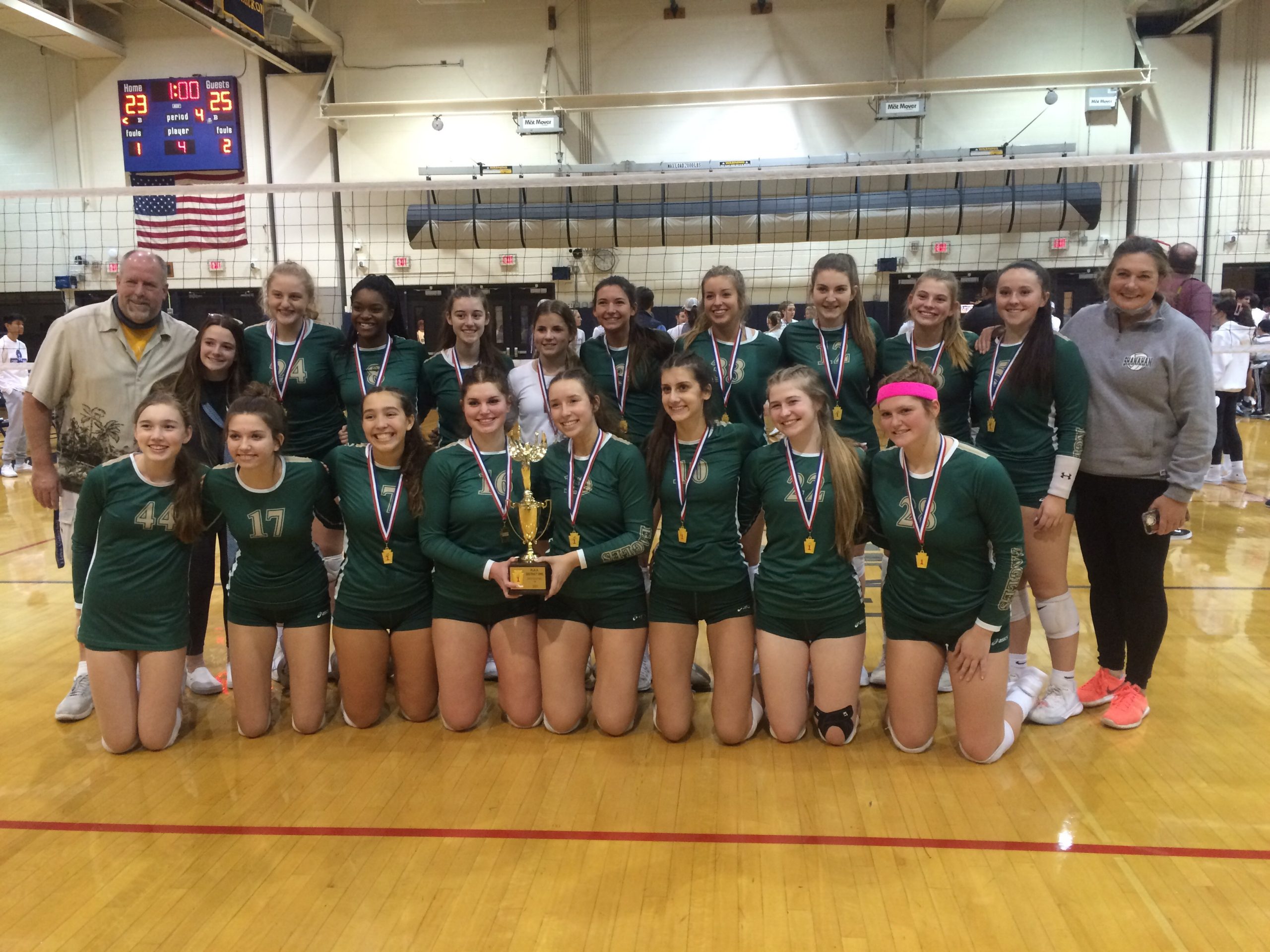 The No. 3 seed Eagles (19-3) earned narrow two-point wins in all three of their winning sets. In each case, the key was Shanahan’s clutch play at the end of the game.

The first set was tied 24-24 before a couple of powerful hits by Maddie Rudolph settled the issue at 26-24. The third set was tied 23-23, then Shanahan won the next two points on serves. And in the final set, the Eagles came back from a 16-13 deficit to earn a 25-23 victory.

“The key for us was remaining calm, staying loose, putting pressure on the other side and not feeling the pressure,” said Shanahan head coach Greg Ashman. “We’re the team that’s not supposed to be here – other teams were ranked higher than we were, had better [regular-season] records than us. Maybe people overlooked us, I don’t know.”

Shanahan, who won five straight district titles from 2015 to 2019, returns to the top of the perch in District 1 4A. When the Eagles scored their final point of the match – a Rudolph hit that was returned by Council Rock North into the net – it dawned on the Shanahan players what they accomplished.

“I just looked at my team in disbelief and said, ‘Oh my gosh, we won it,’” said Shanahan senior Julia Pagnotto, who drilled 7 kills Thursday (it was her birthday, too). “I never thought we would come this far, and we did, and I’m really proud of us.”

Shanahan senior setter Amelia Devlin said, “My older sister Mikayla used to play here a few years ago, and I felt like now I have my own championship to celebrate. I’m a setter and I can’t look good unless everyone else looks good. I just dove on the floor for no reason when we won it (laughs). It was a great game, I was really excited.”

Shanahan senior setter Allison Monaco said, “I think we had the mentality of the predator. We never let having a lower seed affect our play. I think we had a lot of doubt [earlier] this year, having three losses, but it really didn’t matter to us once we hit districts.

“We got our ninth district title [in program history] this year, and now we really want that state title. We’re really a family at Shanahan, and I think that shows on the court. I think Coco [Shultz] and Maddie [Rudolph] are a key part of this team, and they help us maintain a good mentality while we’re playing.”

Rudolph recorded 20 kills Thursday night and Shultz had 10 kills. Rudolph also had a trio of blocks.

“When Maddie [Rudolph] keeps herself in rhythm and contacts at the highest point, she’s amazing to watch,” said Ashman.

In the first set, Council Rock bolted out to a 7-3 lead, and maintained it lead until late in the game. CR North held a 22-18 lead, but then the Eagles ran off four straight points with Monaco serving. With the score tied 24-24, Rudolph’s back-to-back hits scored the winning points.

In the second set, Council Rock North (21-1), led by senior Ashleigh Adams, came back with a late rally of their own, scoring the last four points in a 25-19 win. Adams has committed to Florida Atlantic University to play beach volleyball.

Monaco said, “I think we got a little tense in the second set, but we never let that bother us going forward. We’ve come back before, and they had a home [court] advantage, a huge fan section, but we played with a bigger mentality. I’m really proud of our team.”

In the crucial third set, the lead went back and forth, then Shanahan built a 23-18 lead, only to see Council Rock North run off five straight points to tie the score at 23-23.

Council Rock North’s next serve flew out of bounds; then Shanahan freshman libero Maddie Metcalf’s serve was returned out of bounds and the visitors had a 25-23 win.

“Hats off to Maddie Metcalf – she plays with ice water through her veins,” said Ashman. “She never lets anything faze her, and doesn’t let the seniors push her away either – she belongs there.”

Council Rock North took a 15-10 lead in the fourth set, but a couple of four-point runs by Shanahan gave the visitors a 23-20 lead. With Shanahan holding a slim 24-23 lead, a hard hit by Rudolph was returned into the net, and the Eagles were district champs.

“I think the key tonight was our communication,” said Devlin, who also contributed four blocks as well as solid setting. “There were a few times tonight that our communication started to drop, and that’s when our play started to drop. Once we started talking more and even cheering for random points, it brought us up, improved our confidence.”

Ashman said, “Tonight we didn’t get beat by long runs, and we told our servers that anytime one of them goes back there, our service can run up some points. And we saw some people do that tonight – we saw Keira Dunn do that, we saw Coco Shultz do that, we saw Maddie Rudolph at times do that. Some of our best servers were off a little tonight, so we had to rely on everybody [for serves].”

“I feel like we’ve come a long way from last year, we’ve become a really good team over the course of this season,” said Pagnotto. “I really think our team cohesion defines us. Team huddles are our best friend – we come out of the huddle and our play turns [better], it feels like.”

Council Rock North head coach Mike Adams said, “We were playing a phenomenal team tonight. We were ready for them tonight – we knew what was coming. Tonight was a struggle between two high-level teams. We really didn’t have to struggle much this season – we only lost two sets during the regular season. We need more matches like this [against Shanahan] earlier in the season so we can keep gauging our team, keep moving, keep improving, and tonight we were right with them. I’m OK with where we are. We’re going to get better before we play our next state match, like we’ve been doing.

“Shanahan has good discipline and size – a good all-around team. They are well-coached, and OK with adjusting where they play defense, where they attack from. And we do the same – we’re OK with adjusting to where we play defense, we’re OK with attacking from a lot of different spots. The biggest difference between them and us is that they have a few more bigger offensive weapons than us. So we have to make sure that they stay uncomfortable, we can’t let them get comfortable, because if they’re in system, they’re tough to stop.”