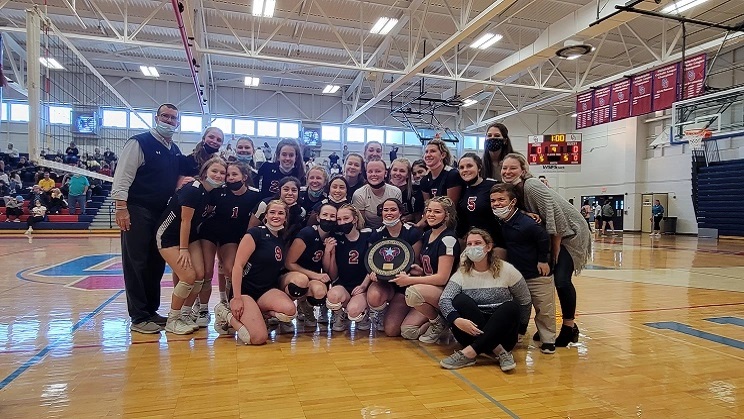 Cardinal O'Hara players hold up the championship plaque after winning their first Catholic League volleyball title since 2009 on Saturday with a 3-0 win over Archbishop Wood. (Steve Haug/Archdiocese of Philadelphia).

MARPLE — Sarah Kelly and her Cardinal O’Hara volleyball teammates did not have to quiz head coach Bill Collins or do a Google search to find out the last time the Lions won a Catholic League title.

They knew. It was right there, in plain view, on the large championship banner that hangs in the gym where the Lions practice every day and play their home games. It was 2009, and the Lions were determined to end that 12-year drought

They did so in dominant fashion Saturday afternoon.

O’Hara’s 3-0 victory over Archbishop Wood in the Catholic League final capped an impressive run to the title in which the Lions lost just one set in league play.

“This means everything,” said Kelly, one of 10 seniors on the team. “We know how many times we’ve had the opportunity to win it and didn’t. We wanted this, and being able to bring it home is amazing.”

“They’re different from all the other teams in the league in that regard,” Wood coach Tim Killian said of O’Hara’s imposing front line. “But they also don’t make mistakes. You’ve got to earn everything, and we’re not always used to that in the Catholic League. They played a flawless game today. They deserved it.”

“We’re just gifted with a lot of height, and I think that plays a big factor,” Doogan said. “We also practice it over and over again, block after block, and that came in handy today.”

Doogan set the tone early. The Richmond basketball commit and reigning Daily Times Girls Basketball Player of the Year had six kills and a block in the first set. Four of those kills and the block came as the Lions closed out the set on a 10-1 run.

Kelly and McGuigan took over in the second set, with three kills and a block each. Fittingly, Doogan smothered a big swing by Wood’s Danni Narcissi to close out the victory.

“Our net play all year has been strong,” Collins said. “The harder nonleague schedule, playing (Bishop) Shanahan, Garnet Valley, Sun Valley, Pope John Paul II, all those teams that we played, paid off for us. There’s nothing that the Catholic League showed us that we didn’t see already.

“Wood’s good. They’re the team that beat us in one set earlier in the year. The girls wanted to go undefeated in sets in the Catholic League and when we lost that first set to Wood we just said, ‘It is what it is, let’s go try to win.’”

O’Hara won it all, and best of all, capped it on their home floor. The match was supposed to be played at Bonner-Prendergast, but Killian asked for a change of venue because of the low ceiling at MBAP. Killian asked Collins if O’Hara would be willing to host the match. Collins said he would be glad to, but it was up to the league. PCL administrators OK’d the switch, and the Lions got to end their championship drought at home.

“To win it here, on our home floor, is super special,” Kelly said. “It’s a great honor to be a part of it.”