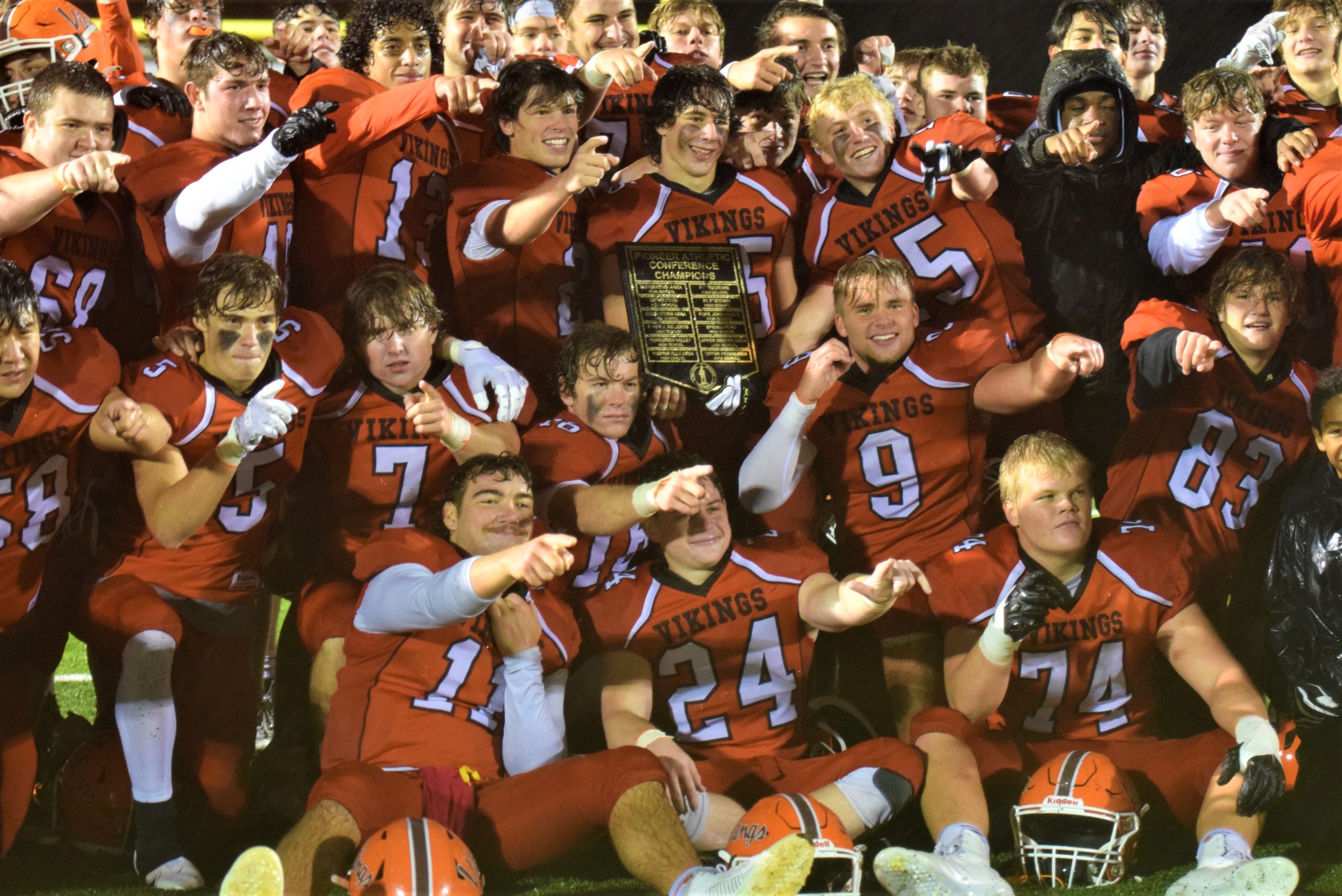 GRATERFORD >> Rob Heist had been here before.

So had his quarterback, Ethan Kohler.

But they hadn’t been here with this group — a Perkiomen Valley squad that withstood two years of disappointment, stayed together during a tumultuous 2020 season, and was rewarded with a dominant, undefeated run through the Pioneer Athletic Conference.

So it was that the Perkiomen Valley Vikings came to celebrate the 2021 PAC championship — the program’s fourth in six years — as if it was their first.
Perk Valley ran for 257 yards and pitched a shutout against the powerful offense of Frontier Division champions Pope John Paul II (7-3, 5-1 PAC), winning the 2021 title by a final score of 30-0 at Thomas J. Keenan Stadium.

This senior class of Vikings saw their reign end at the hands of rival Spring-Ford back in 2019, while a slow start cost them dearly in 2020.

They were taking no chances in 2021. One of the area’s toughest non-league schedules yielded tough losses to Coatesville and District 3’s Manheim Central in September, but forged a battle-tested, take-on-all-comers mentality as PV charted a dominant run through the Liberty Division and finished with a defensive flourish Friday night.

The Vikings caused four turnovers, limited the Golden Panthers to 67 yards of offense and didn’t allow PJP to run a play from PV territory until midway through the fourth quarter as they consistently won the field position battle, setting their offense up repeatedly with short fields.

“We were able to boost our offense’s confidence in tough conditions,” said Jeremy Brewer, whose interception accounted for the first of the four turnovers.

Upon making his debut as a freshman in a thrilling comeback victory at Spring-Ford back in 2018, Kohler’s arm talent was immediately apparent. But on Friday, in conditions unfavorable for airing it out, even more obvious was his evolution into a complete quarterback.

A driving rain and gusty winds cut Kohler’s dual-threat capabilities in half — but the one that remained was his ability to move the chains with his legs.

Much as he did in PV’s signature win over Spring-Ford earlier this year, the senior QB carried the offense — literally at times — picking up 113 yards on 16 rushes and allowing the Vikings to repeatedly extend drives.

“That credit goes to my offensive line,” said the senior QB. “Anybody can run through those holes.”

Center Reed Overholser recovered from an errant snap early in the game to find his footing and put Kohler, Andrew Beck (108 yards and two scores on 11 carries), and Ryan Klimek (45 yards, two rush TDs) on track to control the game on the ground.

“I knew it was a challenge,” said Overholser. “But I knew how to just go out there and do what I do best — slow it down and take pride in every snap.”

It became apparent early on that the weather conditions would severely hamper the conference’s two top offenses, as quarterbacks Kohler and PJP’s DJ Clarke were repeatedly forced under center instead of their standard shotgun formations. Brewer and Vincent Corropolese had early interceptions for PV deep in Golden Panther territory, but came away empty on both opportunities.

Corropolese’s interception was the result of teamwork, he said. “Everyone called out ‘watch the screen’ and sure enough, that’s what (Clarke) threw,” he said. “It was awfully wet out here, but I was able to hold on.”

It wasn’t until PJP attempted a fake punt on a 4th and 12 and came up short at midfield that the Perkiomen Valley offense got rolling as Kohler moved into a pistol-type set, finding Michael Poruban for his lone completion of the contest, then carrying for a pair of first downs on his own before handing off to junior back Ryan Klimek, who carried 10 yards to draw first blood for the Vikings.

The two-point conversion was perhaps the play of the night as Klimek, lined up to kick a PAT, caught an errant snap and weaved his way across the goal line to give the Vikings an 8-0 lead that they took into the break, as PJP struggled to find traction on offense.

Perkiomen Valley running back Ryan Klimek cuts back and makes a PJP defender miss in the backfield during the PAC final. (Austin Hertzog – Medianews Group)

A long PV drive ended on a diving INT in the end zone by PJP’s Steele DePetrillo after halftime, but the Golden Panthers fumbled the ball back on the next play, setting up Klimek’s 2nd TD run of the night, this one from 14 yards. Kohler’s dash off right end made the lead 16-0 with 5:10 left in the third quarter. From that point on, the Vikings asserted their will on the ground, averaging over eight yards a carry after halftime.

“Our coaches put us in great positions,” continued Austin Henry, “and our scout team works hard in practice to give us the right looks. Everybody gets credit for this one.”

“They just beat us in all facets of the game, admitted PJP coach Rory Graver. “Great team, great coaches, great offensive line — they deserve this.”

“He has a ton of potential,” said Graver. “We were just up against it tonight.”

Pope John Paul II quarterback DJ Clarke follows through on an incomplete pass in the second half against Perkiomen Valley in the PAC final. (Austin Hertzog – Medianews Group)

The Golden Panthers await results from around District One to learn their playoff fate in Class 4A.

Andrew Beck added two TD scampers in the fourth period. The Golden Panthers would embark on their best drive of the evening with only minutes remaining, but a Bryan Helinski sack and repeated pressure from Shane Nelson thwarted the drive at the PV 30, preserving the shutout and championship victory.

Now standing at 8-2 (6-0 PAC) the Vikings are assured of hosting a first-round District 1 Class 6A playoff game next week, as they try to claim their first playoff win since 2017.

It’s a feat that even Kohler — the last holdover from PV’s last PAC title squad in 2018 — hasn’t accomplished yet.

“We want to compete against some of the powerhouses of District One, and we’ll have to be firing on all cylinders,” said Heist. “Whoever we see next week will be a great football team — we need to be ready.”

Notes: Perkiomen Valley celebrated their 23 graduating seniors on the football team, plus senior band members and cheerleaders before the game.
“So proud of them,” said Heist. “This group of seniors have battled through adversity and they deserve to win this championship.”

Football: Ugly weather night for Sun Valley, then Rustin did the rest
Football: Lower Merion only a warm-up for focused Garnet Valley