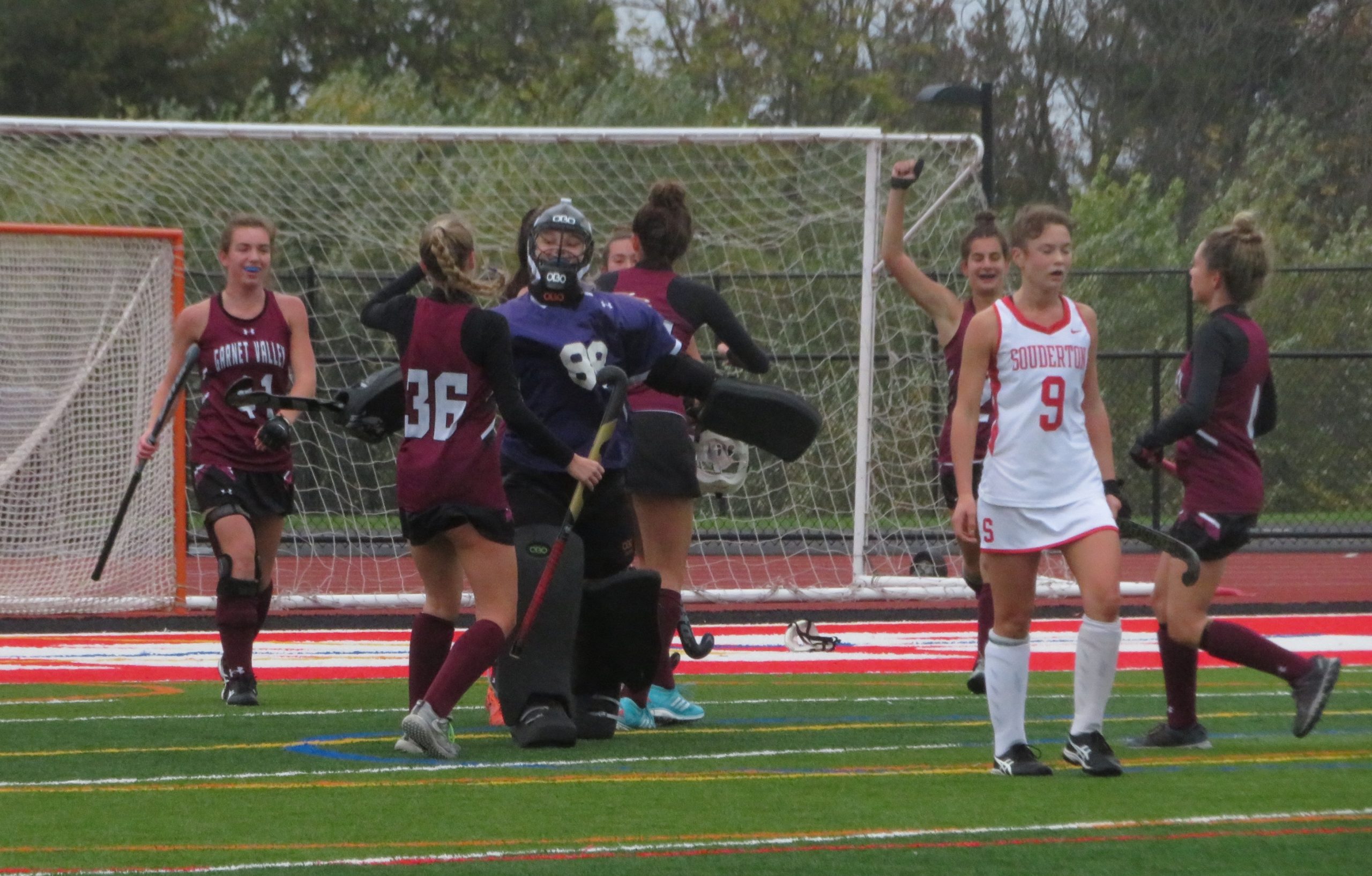 Garnet Valley celebrates after its 3-1 win over Souderton in the District 1-3A quarterfinals on Friday, Oct. 29, 2021. (Mike Cabrey/MediaNews Group)

FRANCONIA >> Nicolette Saccomandi could not hide her elation in the crowd.

“I did jump so high I was so excited,” the Garnet Valley junior said.

Saccomandi’s goal in a packed circle on a penalty corner broke a 1-1 tie with host Souderton with 11:37 remaining in the fourth quarter of Friday’s District 1-3A quarterfinal.

Less than three minute later, the seventh-seeded Jaguars extended their lead on another corner and went on to knock off the No. 2 Indians 3-1.

“We were just looking for a foot cause at halftime we were like we had no corners, they had so many,” Saccomandi said. “We just needed to get one off and execute well.”

Garnet Valley did not have a corner until the final quarter with Saccomandi collecting the go-ahead tally off a Riley Gallagher assist on Jaguars’ third corner of the windy, dreary afternoon. GV made it a two-score advantage at 8:43 when Julie Boettler hit in a ball Hannah Long sent to the long post.

The win clinches a spot in the PIAA tournament for the Jags and advances them to a semifinal matchup at No. 6 Methacton Tuesday. Methacton defeated No. 3 Wissahickon 4-1.

Souderton (18-2-0) pulled even 1-1 with 6.5 seconds left in the first quarter as Ava Jones scored on a corner but the Indians could not find the back of the cage on their chances on corners as their 17-game win streak was snapped.

“We didn’t capitalize,” Souderton coach Sue Casciato said. “I didn’t look at the stats but we had a ton of corners, we missed a wide-open goal cage. I don’t think if you watched the game you’d say it was a 3-1 loss, I felt like we had our opportunities.”

Souderton can still reach states through playbacks with a chance to earn one of District 1’s seven bids hosting Wissahickon Tuesday.

“We have to reset,” Casciato said. “It’s been a long time since we lost so it happens. We’re not going to win every game so it’s just unfortunate that I felt we were every bit as good as they were, we just didn’t rise to the occasion.

On the corner that gave Garnet Valley the lead, Gallagher put a ball in front but it was stopped by Souderton’s Ang Borisow. Saccomandi corralled it and swept a shot at the cage but it was denied by a defensive save from Jones, who cleared it off the goal line.

The ball, however, stayed in front with Gallagher touching it forward to Saccomandi for a shot in at 11:37.

The Jaguars found success again on a corner to go up 3-1. Gallagher took Boettler’s insertion pass at the top of the circle then sent the ball to Long on the right side. Long’s bouncing hit got past a diving goalie then found Boettler at the left post to knock it in.

Garnet Valley grabbed a 1-0 lead with 1:10 left in the first quarter as Alana Williams redirected in a ball from Long.

Souderton tied things just before the end of the quarter on a corner as Lauren Frye skipped a ball from the right side of the circle through traffic to Jones, who one-timed a shot near the left post with 6.5 seconds.

“That was a nice corner,” Casciato said. “It was the same one they had at the end of the game. Like I said, we just struggled to do some basics today.”