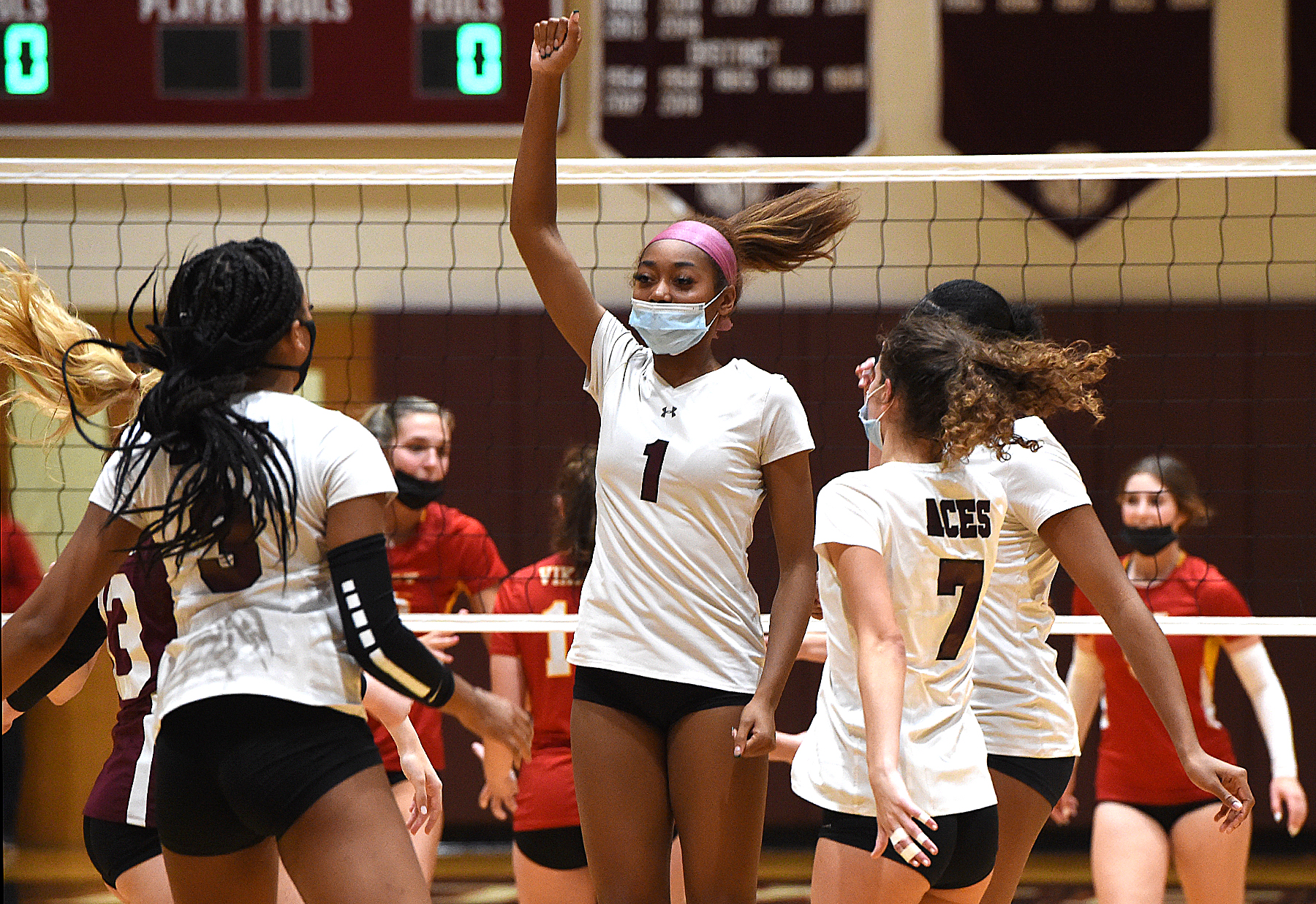 Lower Merion >> Host Lower Merion’s 3-1 win against West Chester East in the second round of the PIAA District 1 girls’ volleyball tournament Thursday evening was a nip-and-tuck affair for the first three sets.

The visiting Vikings opened with a 25-20 win in the first set, then Lower Merion evened the score with a 25-17 victory. East took a 16-11 lead in the pivotal third set before the Aces rallied to win, 26-24. Lower Merion then rolled to a 25-14 victory in the final set.
One of the obstacles the No. 6 seed Aces (20-2) had to overcome Thursday was the presence of East’s 6-foot-6 senior middle hitter Elizabeth Carr. The Purdue commit had 24 kills, 6 blocks and 6 digs Thursday night, and to help counteract this the Aces relied on their two talented outside hitters, junior Claire Hamilton (21 kills) and senior Abiah Lane (15 kills).
“We definitely had to feed our outside hitters today, it was kind of tough to get our middles involved with a big block in their face constantly,” said a smiling Lower Merion head coach Lauren Perri. “It was nice that our outside hitters split out and to have both of them as an option [is great], one of them is always up.”

Abiah Love sends a shot over the net in game two.

On Saturday, Lower Merion will face No. 3 seed Bishop Shanahan in the district quarterfinals, with the loser moving to the playback bracket. Shanahan gave Lower Merion one of its two losses (the other was to Central League champ Garnet Valley).
For 11th seeded West Chester East (14-6), the season is over.
“Our team gave everything they had tonight,” said West Chester East head coach Erin Flynn. “I have never seen them work so hard collectively. Although we’re disappointed that we lost, we’re so proud that we made it this far because East hasn’t been to the district [girls’ volleyball] playoffs since 2012. We gave it all we had and it’s been a good run.”
In the first set, West Chester East roared out to a 22-11 lead, and despite a late 7-1 run by Lower Merion, the Vikings prevailed 25-20, with a kill by Carr as the final point.
“She [Carr] has a block that’s amazing, and a lot of teams are intimidated by that,” said Flynn. “It’s really awesome to watch, and to be completely honest, it’s been amazing to be part of her volleyball career.”
Lower Merion fell behind 7-4 in the second set, but back-to-back kills by Hamilton fueled an Aces’ comeback.
“Claire was definitely up, she was pounding the ball a little harder today,” said Perri. “She was in the zone 110 percent tonight.”
With the score tied at 10-10 in the second set, Lower Merion won the next five points en route to a 25-17 victory.

“One of the biggest things we had to focus on was that our serve-receive was not on point in the first set,” said Perri. “We watched East on Tuesday night and we knew they had some strong servers, and they made some deep float serves, which is something we tend to struggle with. We didn’t have the opportunity to set up our hitters in the first set, and that’s one of our strengths, being one of the bigger offensive teams out there. Once we got our serve receive pass down, it was easier to smash the ball down and get those rips that we needed to get.”
In the pivotal third set, East moved out to a 7-2 lead, but the Aces came back to tie it up at 8-8. The Vikings rallied again for a 16-11 lead, but Lower Merion came back once again to tie the score at 22-22. The Vikings held a 24-23 lead, but Lower Merion won the last three points to take the third set and a 2-1 series lead.

Perri credited the Aces’ defense as a key factor Thursday night.
“Going against a big middle like [Carr] – she was putting the ball all over the court today, so it was hard to even get a touch on her hits, let alone trying to stop her. Sophie Shin (2 blocks) and Laila Newborn (3 blocks, 3 kills) came up big with the blocking, they did an excellent job of at least getting a touch on the ball and forcing some errors. Sophie and Laila came up clutch with putting on the pressure and making sure we had the opportunities to get ourselves set.
“Zoe Brown (15 digs) and Jenna Love (14 digs) were kind of pivotal with their defense. They picked up a lot of tips and some short stuff – they were pushing themselves out of their zone to get a scrappy ball up.”
For Lower Merion, Lane chipped in with 10 digs, and Hamilton added 8 digs.
“It was a full defensive effort by our team – making sure we get to the right spots, making sure we’re crossing over and covering the spots we needed to get to,” said Perri. “We were definitely moving the ball around, and it was nice to see everyone step up and give a big defensive effort.”

Also for the Aces, Emily Greenland dished out 36 assists Thursday.
West Chester East didn’t make it easy for the Aces, getting fine performances from underclassmen such as junior setter Elliet Manning (32 assists, 3 kills, 4 digs) and sophomore outside hitter Alexa Mork (10 kills, 9 digs) as well as Carr. Manning passed the 1,000 mark for assists this season.

“Sometimes you think Elliet has 15 legs, because she’s everywhere, all at the same time,” said Flynn. “She dedicates her entire game to making sure that everything works out and that all the girls get their time to shine. She’s been the glue of this team for the last three years. … And I have never seen anyone put as much commitment and heart into a game as Alexa.”
Flynn also praised the contributions this season of sophomore libero Izzy Byrnes and junior Katelyn Kernicky (who had 7 digs Thursday).
“Izzy has shown drastic improvement from the start of the season to tonight’s game,” said Flynn. “She has put so much time and effort and dedication into this sport over the past several months, it’s amazing to watch her improvement. Katelyn has been tremendous on defense. I’m really proud to be a part of this team.”
Flynn added, “Even though this was our first trip to Districts [since 2012], it won’t be our last. We’re hungry now, and ready to come back next year.”