Ches-Mont champion Henderson bows out in shocking first round exit 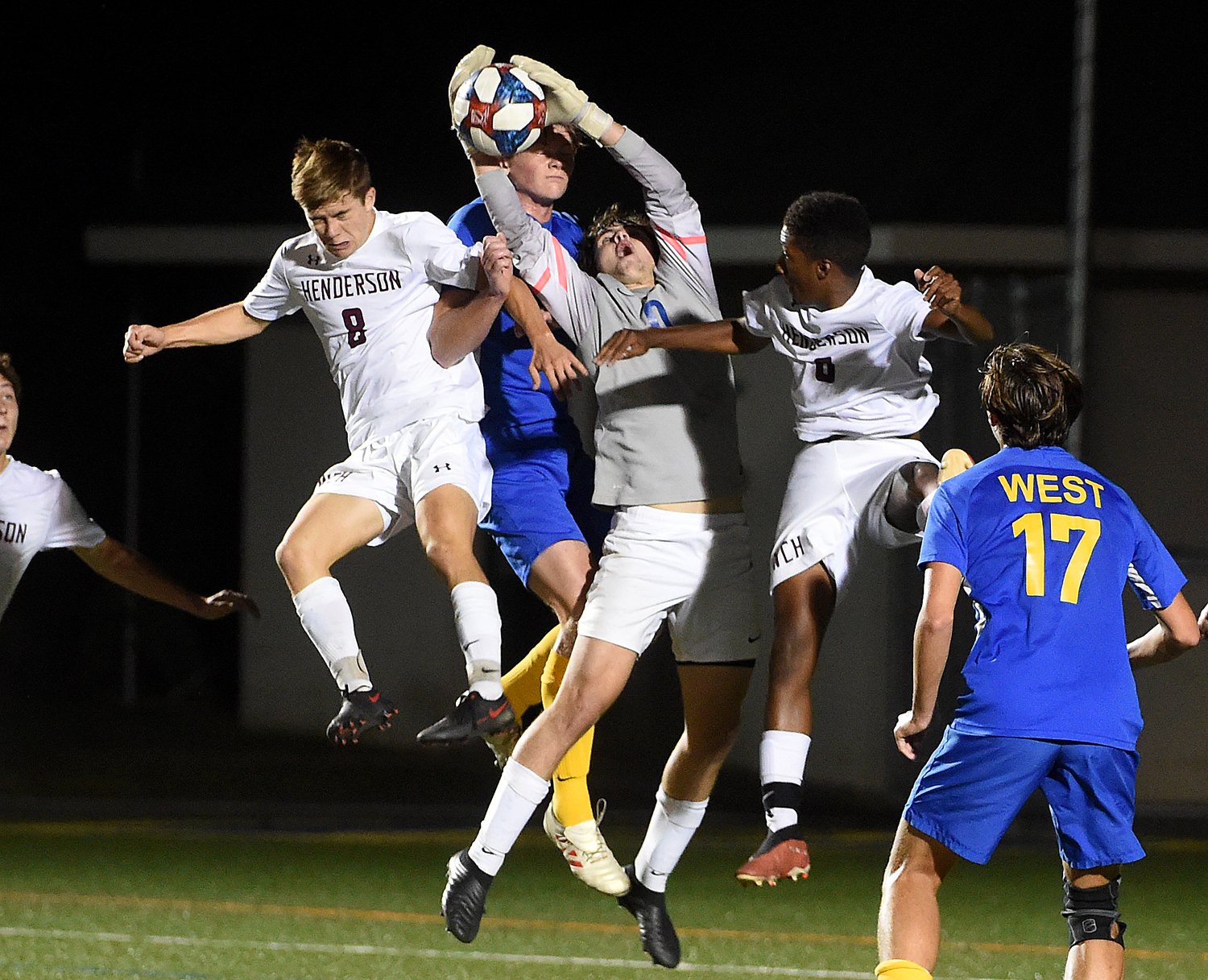 It’s the fascination, and the potential curse, of advancing to the postseason. Where what happened during the regular season doesn’t really matter anymore.

That hard lesson certainly hit home on Thursday evening when the West Chester Henderson boys’ soccer squad fell to visiting Hatboro-Horsham 2-1 in the first round of the District 1 4A Playoffs. It put a sudden and shocking end to the Warriors’ 2021 season that featured an outright Ches-Mont championship.

“We were all definitely hoping to play well into November,” said Warriors’ senior goaltender Tino Kneis.

“But in playoff games, anything can happen. It happened to us two years ago. We were the higher seed against Council Rock (North) and we lost 1-0.”

It’s true. In 2019, 13th seeded Henderson fell in a play-in game. But this time, the Warriors were the fourth seed, avoided a play-in game, and still exited very early. The top five teams in the district move on to states, but you have to advance to the quarterfinals just to qualify for the playbacks.

“As juniors they had a unique season with COVID, so to come back very prepared and win our West Chester battles (with Rustin and East) and win the league, my heart goes out to them – this is a hard way to go out.”

The Warriors’ final record is 14-5 overall. Thirteenth-seeded Hatboro-Horsham (14-6) advances to the quarterfinals on Saturday.

“I give a lot of credit to Hatboro,” Popolizio added. “They came out psyched and ready to go.”

Considering that these two teams saw each other last August in a competitive preseason scrimmage (the Hatters won 1-0), there was no chance that Henderson was looking past its opponent. Maybe the Warriors gave Hatboro-Horsham too much respect.

Right from the start, Henderson exhibited some nervousness, which contributed to a slow start. And that, almost inevitably, led to a deficit which added to the internal pressure. A step slow here, a careless pass there, and in a flash, the Hatters built a 2-0 lead midway through the second half.

“In games like this in front of a big crowd, it’s a lot of pressure,” explained senior midfielder Adam Gomaa. “It’s a big game. (Sometimes) people get a little nervous and you have a little too much energy and you can get a little ahead of yourself.”

With the situation getting more and more desperate, the Warriors finally broke through with 8:26 to go when a throw in went off Gomaa and onto senior Ethan Jarden’s foot, where he promptly buried it.

“The season was on the line,” Popolizio said. “We never felt like we were out of it, but once we scored that was huge.”

Henderson tried desperately to get the equalizer the rest of the way, and came very close when a throw in by Andrew Kavetski got past the keeper and had to be booted away by defender Nick Katherine with 5:58 remaining. But it never happened.

“Once you get to the playoffs, seeding doesn’t really matter,” Kneis said.

“In some critical moments, the ball just didn’t bounce our way. (Hatboro-Horsham) finished their chances. We kept playing until the very end, but it just wasn’t our day.”

The Warriors did have the edge in shots on goal (15-8) and corner kicks (5-4). And Jarden had several other prime scoring chances, including two in the first half of a scoreless tie.

Hatboro-Horsham’s Jack Elwell opened the scoring when there was a scramble in front of the Henderson goal and he managed to beat Kneis to the loose ball. And then about 10 minutes into the second half the Hatters scored again when Caleb Hudson headed in a corner kick by teammate Tommy Harmon.

“We scored 67 regular season goals, which is outstanding,” Popolizio said. “So we put away a lot of our scoring chances, but tonight it just didn’t go our way. When we didn’t finish those chances early, we lost out on some momentum and the chance to score early and have (Hatboro-Horsham) play from behind.

“At the half, we told the boys to stay composed, not to panic and not to give up a second goal – that our chances would come. Unfortunately, we did give up the second, but we got one back to make it a game.”

Hatter’s keeper Noah Schlosser finished with 14 saves, including a dive that misdirected a promising blast from Joe DeAngelis with 13:19 to go.

“Their goalie came up big on a couple saves against Ethan (Jarden) and then Joe (DeAngelis) at the end,” Popolizio said.

During a tear-filled post-game huddle, Popolizio did his best to honor his seniors and put it all into perspective for his returning players.

“I reminded our underclassmen to remember this feeling,” he said. “It does come to everybody, unless you are hoisting a state championship trophy.

“Our offseason for next season start now.”