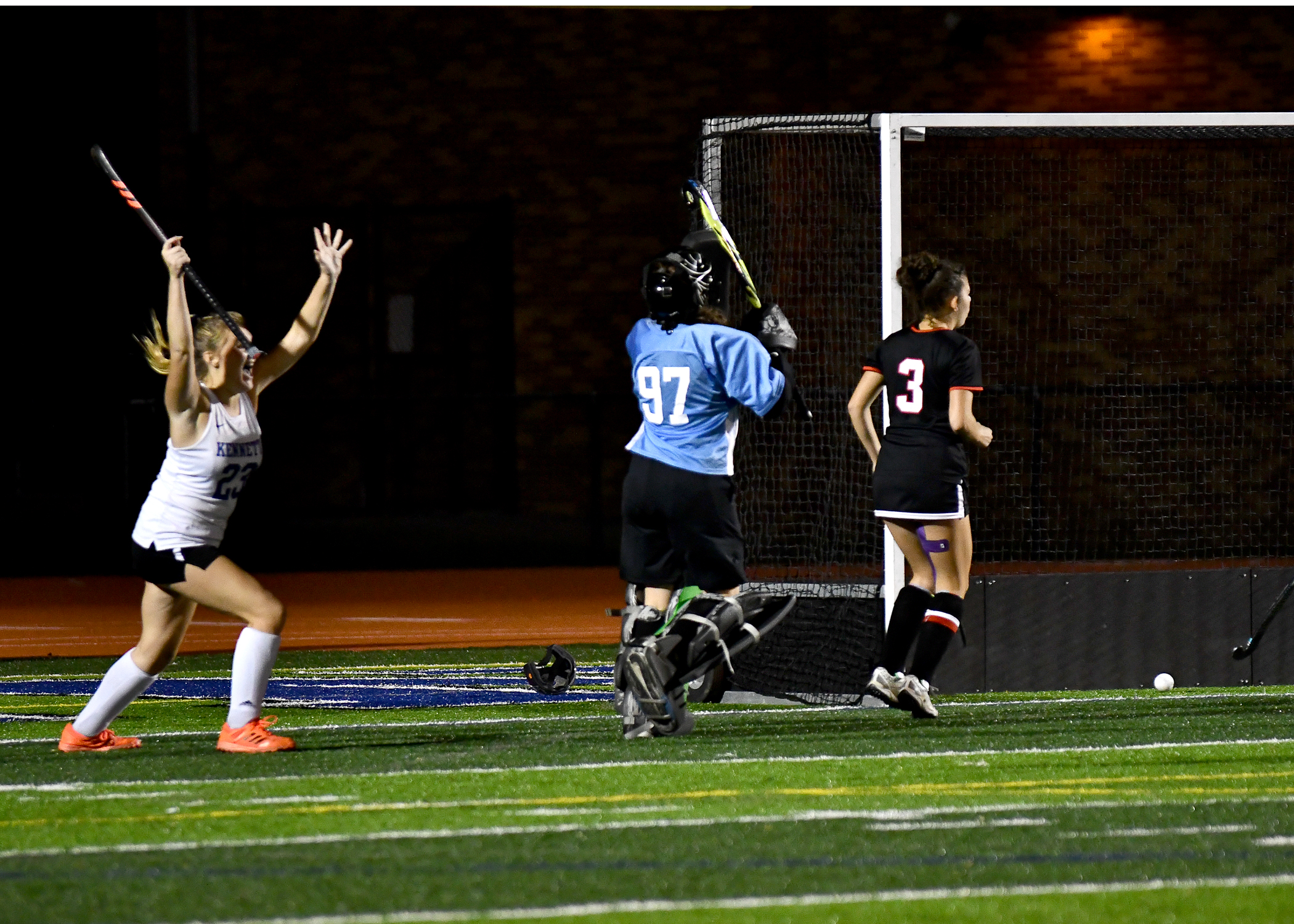 No. 9 Boyertown had to be feeling pretty good about their chances to move on to Friday’s District 1, Class 3A quarterfinal round, holding a 2-0 lead over No. 8 Kennett deep into the fourth period Wednesday evening on the Blue Demons’ home turf. But that lead disappeared in the blink of an eye, as Kennett (15-2-2) exploded for three goals in three and a half minutes to steal a 3-2 overtime win over the Bears (13-4-1)

With the win, Kennett advances to the quarterfinals, where they will face top-seeded Conestoga, a 4-0 winner over Downingtown East Wednesday.

“We were a little discombobulated there for a while, and just couldn’t seem to make things happen,” said Kennett coach Meghan Shumway. “It was really frustrating because we weren’t as fluid as we need to be. We made a few adjustments in the last period, and finally found our groove.”

After a fairly evenly played first period, much of the next three quarters was spent on the Blue Demons’ offensive half of the field, resulting in Kennett being awarded over twice as many penalty corners, 17-7 by game’s end. The problem for Kennett was that Boyertown managed to convert on a couple of their chances, while the Bear defensive unit kept Kennett out of the cage.

The Bears got on the board first, when Katelyn Dulin scored on a penalty corner. Dulin made it 2-0 with a score midway through the third, this time with an assist to Alex Morgan.

“This has been an awesome season,” said Bears’ coach Alicia Terizzi. “This team went 4-and something last season, and hadn’t made the playoffs in years. This is my first year with the team, and we’ve enjoyed every second of the season. Just a bitter way to see it end.”

Despite dictating the action for the better part of the game, the Blue Demons were starting to see the season drift away, and simply wanted no parts of that ending. Awarded a penalty corner with just over three minutes to play, Kennett cut the lead to a single goal, with Marrisa Herring taking an assist from Kaitlyn Stolp and slamming it home.

“We all just pushed each other to do better,” said Stolp. “We all knew we had played better than the score, and we just had to keep pushing to make it happen.”

Barely a minute later, the game was knotted at two apiece, when the Blue Demons converted another penalty corner. This time around, it was Lucy Myers, with Stolp once again getting credited with an assist.

Boyertown made on final push, getting a corner in the final minute, but Kennett cleared it quickly and the game was headed to the seven-seven-overtime.

“We were prepared for overtime,” said Shumway. “This was the fourth time we’ve played overtime this season, so I think that experience certainly helped.”

Kennett got the ball first in the extra stanza, and made sure the Bears never saw it again. Jordyn MacMillan grabbed the ball around the 30-yard mark, and took off, getting one-on-one with a drawn out goalie. MacMillan continued to her left, then unleashed a backhand that squirted between the goalies legs and into the back of the cage.

“I saw the goalie come out, looked at my options and took the shot,” said MacMillan. “We just had to keep playing as a team. We all knew the goals would come. This is a big step forward for our team—I’m not sure we’ve gone this far before. And it feels amazing.”

With the win, Kennett is guaranteed to at least be playing for a spot in the PIAA championships, as the top seven advance in Class 3A. One more win, and Kennett is a state qualifier for the first time ever.

“It’s really exciting,” said Shumway. “We’ve never been in this position before. It’s going to be a great experience for the girls. This is a young team—we still don’t have any seniors. Conestoga is going to be the toughest team we’ve faced all year, but wins like today help realize that even if we aren’t playing our game, if we keep pushing, we can get there.”