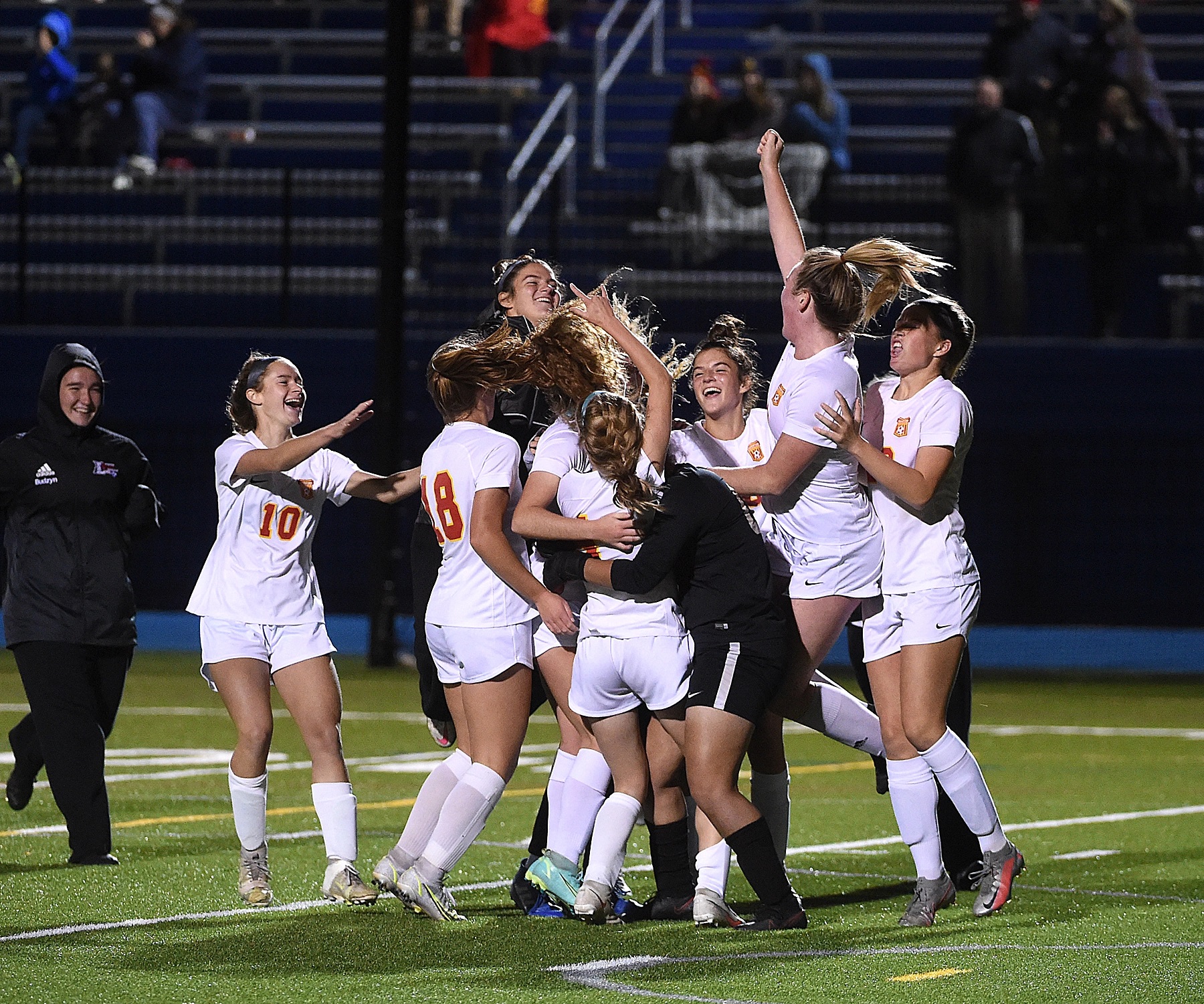 SPRINGFIELD — From the moment the celebration around Mackenzie Lacey dispersed in the 13th minute, Emma Lonergan knew what needed to be done.

Up a goal 13 minutes into their District 1 Class 4A opener Tuesday, the Haverford defense understood even more clearly the task ahead of it. Any nerves, any uncertainty about being an underdog in the districts debut for most of the Fords went out the window with a lead to protect.

For Lonergan, the combative and clinical left back, the mission sharpened with a lead in hand.

Haverford’s Mackenzie Lacey, left, beats Springfield’s Mia Valerio to a loose ball Tuesday night. Lacey had the only goal in the Fords’ 1-0 victory in the first round of the District 1 Class 4A tournament. (PETE BANNAN – DAILY TIMES)

Haverford’s defense did the job, making sure goalie Maddie Kantawala had precious little to do in pulling an upset, Lacey’s goal standing up for a 1-0 win over 10th-seeded Springfield. The victory sends the 23rd seed Fords (13-6) into the second round to take on No. 7 Avon Grove (14-2-1) on Thursday night at 7 p.m. It also avenges a 1-0 loss to the Cougars on Oct. 5.

That result left the Fords under no illusion of being anything but the underdog, but that suited Haverford fine. The back four, each of whom went the full 80, particularly embraced the challenge. Mollie Carpenter and Alyssa Seavey paired in central defense, Seavey often stepping up to contest possession in midfield. Lonergan and Maddy Gillespie patrolled the flanks, Gillespie helping late with incisive, line-splitting passes to relieve pressure on the defense.

The defensive side of the ball was where the biggest adjustment came. In the last meeting, a Coryn Silberstein ball pried open the defense to set up the only goal. This time, the Fords adjusted by making sure a midfielder, most often holding mid Paige Snell, constantly shadowed Silberstein, cutting down the space she had to spray dangerous passes.

Neutralizing Silberstein was a big reason why the Cougars (13-4-2) didn’t get their first shot on target until the 58th. The Cougars called Kantawala into action only twice, despite chasing the game for nearly 70 minutes.

“We didn’t have that in the first game against them,” Lonergan said. “Paige is an insane defensive player and she can read anybody really well, so that really helped cut off all of her passes.”

“Last time, when our three midfielders had the ball, we had more time and more space,” Silberstein said. “I feel like they took knowing that into this game. Every time I had it, there was someone on my back. There wasn’t much I can do with that. They played a good game.”

Haverford created the only chance it needed, and Lacey duly finished it. The move started with a probing run through midfield by Nora Burns and created a brief 3-on-3. She found Deegan Mack in the right channel, and Mack squared to Lacey. The ball got on Lacey quickly, forcing her to take it with her weaker left foot. But with Springfield goalie Emily Boyer shuffling quickly to her right, Lacey struck it back across the grain and into an open half of the cage.

“I don’t know, there was no one marking me,” Lacey said. “I saw the goal and I didn’t think I was going to get to it because it was kind of a hard pass. But I just finished with my left foot.”

Most of the game, played in a stiff crosswind, stalemated in midfield. Snell kept Springfield’s threats bottled up, and the pugnacious pair of Sara Bean and Mia Valerio did the same for Springfield. Boyer was the busier goalie, with three saves. She made the best save of the night, diving to her right to corral a Mack effort after Lacey played her in.

Springfield’s first shot on target came in the 58th when Caroline Walter turned and curled a harmless effort that Kantawala gloved. The senior also punched away a Bean corner in the 61st that swerved threateningly toward her line. Seconds later, Lonergan got stuck into a challenge on Silberstein in the box that had to be spot on to snuff out a chance.

Silberstein conjured a bit of magic in the 57th, slide-ruling a ball into the path of a Liv Gutowski run, but Gutowski couldn’t keep her shot from the left edge of the six-yard box under the bar. Gutowski flashed another shot wide in the 78th, for what proved to be the last roll of the dice on an otherwise special season by the Cougars.

“I feel like we accomplished a lot this year,” said Silberstein, one of the many prominent juniors on the team. “A girls soccer team at Springfield has never had 13 wins before or as many goals as we had this year. That’s something to be proud of, but every year, we’re trying to top those goals.”

The ride continues for Haverford, which entered feeling not quite as satisfied in its regular season but eager to write a new ending.

“It’s great,” Lonergan said. “We had a rough season and I just think we’ve overcome so much and it just helps build onto our self-esteem.”

Also in the Class 4A tournament:

Abington vs. Ridley >> Midday rain postponed the game between No. 20 Ridley and No. 13 Abington, scheduled for Tuesday night. The teams will square off Wednesday at 3:45 at Abington.

Boys Soccer
Haverford scored three times in the first half on the way to a 4-0 win over Norristown in the District 1 Class 4A boys soccer tournament opener.

The tenth-seeded Fords take on No. 7 North Penn in the second round Thursday at 6 p.m.

Souderton 2, Strath Haven 0 >> The 15th seed Panthers conceded on either side of halftime in the setback to No. 18 Souderton.