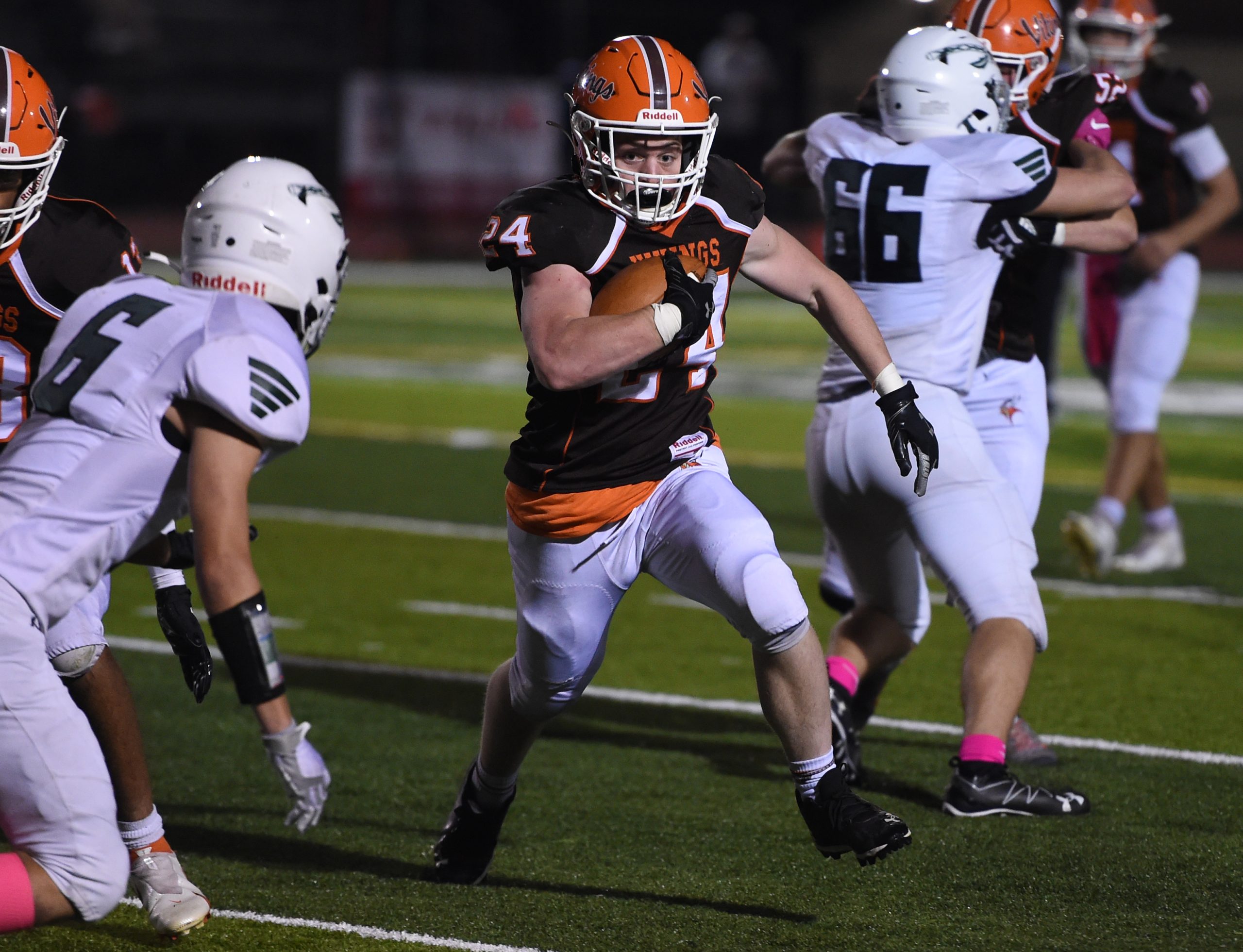 Since the advent of the two-division system in 2016, each regular season has concluded with ‘Crossover Week’ – an event in which Liberty and Frontier Division squads match up with their counterparts in the standings.

The event took a hiatus in 2020 but is back this year with six matchups hosted by the Liberty Division schools. Here’s a closer look at the 2021 matchups, and what’s at stake for each:

Pope John Paul II at Perkiomen Valley (PAC Championship) >> For PV (7-2, 5-0 PAC), it would mean a return to the top of the league for the first time since the Vikings three-peated from 2016–2018. It would also cement Perkiomen Valley, currently No. 6 in the District 1 Class 6A rankings, as hosts of at least one playoff game. For the Golden Panthers (7-2, 5-0 PAC), the stakes aren’t higher, but they are more involved. First of all is the fact that a win would mean the first PAC title in football in school history and the first for any Frontier Division school since the start of the two-division system. From a playoff perspective, however, the Golden Panthers could really use this victory to solidify their spot in a four-team District 1 Class 4A field. Currently standing at No. 4, there’s a chance the bonus points from beating a 6A team could elevate the Golden Panthers as high as No. 2, which would mean a first-round home game.

Pottsgrove at Spring-Ford >> The Falcons (6-2, 4-1 PAC) appear to need this win in order to get into the same four-team Class 4A field, as they currently stand in fifth place in the standings after last week’s loss to PJP. It’s an especially strong year for 4A teams in District 1 when a 6-2 team has to worry about qualifying for the postseason, and the Falcons’ cancelled opener with West Catholic looms large in that regard. The Rams (6-3, 4-1 PAC) are solidly in the 16-team field in Class 6A but can’t move high enough to host an opening-round game. Their motivation, from a postseason perspective, lies in avoiding one of the district heavyweights in the top spots. As of right now, No. 13 Spring-Ford would face a storied Coatesville program.

Phoenixville at Owen J. Roberts >> The Phantoms (4-4, 3-2 PAC) and Wildcats (6-3, 3-2 PAC) are in similar positions (Phoenixville at No. 11 in Class 5A; OJR at No. 12 in Class 6A). OJR could use this win to get back on track after dropping two of their past three, while the Phantoms could secure a winning a regular season, a stated goal of the team and coach Anthony Ciarlello. There’s an outside chance of Phoenixville moving into the Top 8 in Class 5A to host a first-round game, but OJR, like Spring-Ford, just hopes to create a more favorable round one matchup.

Upper Merion at Boyertown >> It would take a truly unfortunate confluence of events for Upper Merion (4-4, 2-3 PAC) to miss the Class 5A playoffs, but the Vikings could capture some needed momentum with a win over the Bears (3-5, 1-4 PAC). Boyertown, which broke through this season with their four-overtime win against local power Pottsgrove, has already qualified for the Eastern Conference playoffs and could use a momentum builder itself.

Upper Perkiomen at Methacton >> Neither side will be in the playoffs in 2021, so motivation will have to come from elsewhere for the Tribe (2-7, 1-4 PAC) and Methacton (4-5, 1-4 PAC). For Upper Perk, it’s a final chance for an accomplished group of seniors to take the field and an opportunity to get some young talent meaningful reps. Methacton and first-year coach Brian Kennedy can salvage a .500 record in his first season at the helm with a victory, which, following last year’s 4-3 finish would constitute progress for a program that had five consecutive losing seasons from 2015–2019.

Pottstown at Norristown >> The Eagles (1-8, 1-4 PAC) were able to secure their first victory of 2021 with a thrilling 33-28 comeback against Boyertown last week. Now it’s Pottstown’s (0-9, 0-5 PAC) last chance to accomplish the same for coach Jeff Delaney and their outgoing seniors.

Pope John Paul II returned to the top of the Frontier Division with a 42-6 victory over Pottsgrove on Saturday afternoon. DJ Clarke went 9-for-11 for 166 yards and 3 TDs in the first half, lifting PJP to a 28-0 halftime lead and nullifying Pottsgrove’s ball-control, ground-and-pound approach. Derek Skarbek caught a TD and picked off a Pottsgrove pass to set up a 35-yard Josh Little TD run in the second quarter. In all, Little had three scores (two rushing, one receiving) in the dominant victory. On the other side of the ball, the PJP II defense stifled Pottsgrove to the tune and put the cherry atop the victory with a Brent Mitala pick-six in the fourth quarter. Pottsgrove QB Ryan Sisko’s 66-yard TD pass to Tyler Kaufman ruined the shutout with 2:20 to play.

Norristown got its first win of 2021 in dramatic fashion, rallying from an early 21-0 hole to reel off 33 consecutive points and hold on to top Boyertown, 33-28. The Eagles (1-8, 1-4 PAC Liberty) got efficient 8-for-13 passing from Chris Carter, with half those completions going for touchdowns. Julian Arthur and John DiNolfi each reeled in a pair of scoring receptions, while Arthur and Meyon Ferrell helped the Eagles establish some consistency on the ground (168 yards rushing). Leo Egbe led the Bears with 62 rushing yards and two scores.

The Eagles now prepare for Pottstown, another team in search of their first victory after dropping a 41-7 decision to Phoenixville. Owen Koch (12 rushes, 119 yards, three TDs) led a prolific Phantoms rushing attack, joined by Ahmid Spivey (67 yards, TD) and Tre Davis (66 yards on only three carries). The win improves Phoenixville to .500 on the season, their four losses coming against the teams that could quite possibly make up the District 1 Class 4A playoff field — Lower Moreland, Bishop Shanahan, Pottsgrove, and Pope John Paul II. Dillon Mayes split snaps with Rashean Bostic for the Trojans and rushed for exactly 100 yards, including an electrifying 74-yard scamper for Pottstown’s lone score of the evening.

Like Phoenixville, Spring-Ford celebrated Homecoming with a decisive victory, the Rams’ triumph coming at the expense of Owen J. Roberts by a score of 42-10. Freshman Matt Zollers was solid in his first start at quarterback, going 11-for-15 for 178 yards and two touchdowns. Mason Scott took a kickoff 87 yards for a Rams touchdown, and Carson Bogdan added a 62-yard INT return for another score as Spring-Ford won its fourth in a row. Area leading rusher Avrey Grimm departed around halftime with 98 yards rushing – putting him north of 1,500 on the season – with a leg injury. Michael Reed’s three-yard run contributed OJR’s lone touchdown.

Liberty champions Perkiomen Valley submitted another dominant defensive performance as the Vikings continued to look more and more complete as a squad, easily retaining the Battle Ax with a 41-0 victory over Methacton. A true team effort saw five Vikings rush for at least 30 yards, led by Andrew Beck (two TDs, 38 yards) and Ryan Klimek (62 yards, TD). Again, however, the defense was the story holding Methacton to 158 total yards of offense and forcing four turnovers, the highlight being Jeremy Brewer’s 65-yard interception return for a score. PV hasn’t allowed a point since the second quarter of their 49-7 win over Owen J. Roberts in Week 7.

Upper Merion all but sealed a spot in the District 1 Class 5A playoffs with their late surge in a 28-13 win over Upper Perkiomen. The Vikings held the Tribe below two yards per carry and got a breakout performance of their own from Brayden Marino (12 rushes, 117 yards, three TDs). Zayd Etheridge tossed 15 completions for 239 yards and a score, and the Vikings will look to improve their playoff standing in next week’s crossover matchup. Upper Perk showed balance on offense (33 rushes, 30 pass attempts) but was unable to keep pace late after tying the contest at 7 on the opening possession of the second half. Three different players accumulated at least 40 yards receiving for the Tribe.

Daniel Boone saw its contest with the state’s top 5A team, Governor Mifflin, cancelled due to cautionary measures. The Blazers (5-3) take on Exeter Township next week in a game with considerable impact on their eventual District 3 Class 5A playoff fate.