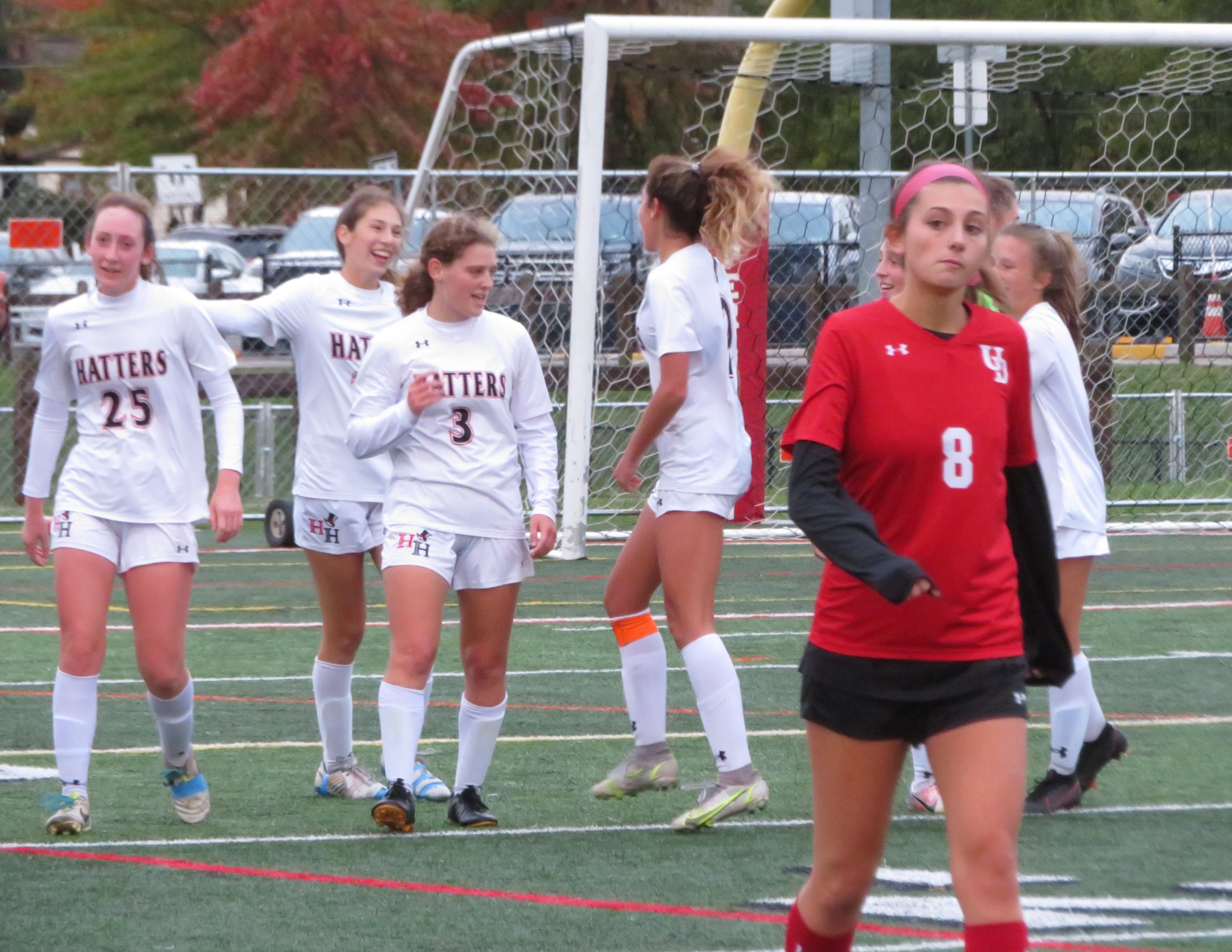 With the Cardinals regrouping after their free kick was cleared, Malofiy kept the pressure on and when UD tried to send the ball back into the Hatters’ half, the Hatters sophomore got a leg out to deflect it, setting up a breakaway chance with the goalkeeper well off her line.

“I saw the defender take a touch, I knew that was my time to just sprint up to the ball,” Malofiy said. “I got lucky and I blocked it and then the goalie came out and I decided to take a shot.”

Dashing to reach the ball, Malofiy got off a left-footed effort from distance that skipped into the far right corner of the net for her second goal on a wet and windy Tuesday afternoon, increasing Hatboro-Horsham’s lead to 3-1 in the District 1-4A girls soccer first-round contest.

“If I take another touch it would go straight to the goalie,” Malofiy said. “So I had to take that shot early.”

A few minutes later, Emma Levin put the matchup between SOL Liberty Division rivals even more in the visitors’ control, converting on a free kick from 28 yards out as No. 22 seed Hatters went on to earn a 4-1 upset win over No. 11 Upper Dublin.

“They beat us twice, we really wanted this one,” Levin said. “I think we wanted it more than them.”

Hatboro-Horsham (11-7-1) dropped both regular-season matchups with UD by one goal – 1-0 on Sept. 22 and 3-2 last Thursday – but in the team’s third go-round, the Hatters jumped out to a 2-0 halftime lead, Malofiy scoring the opener then getting the assist as Ali Hewish put in the second.

“I feel like we had to come out with more intensity in the beginning,” Malofiy said. “The last two games were slow, once they scored we picked it up but this game we decided to score first.”

The Hatters, which won their district opener for the second straight year, advance to face another SOL Liberty side as they visit No. 6 Wissahickon in the second round 6 p.m. Thursday.

The teams split their two previous meetings in 2021, each winning at home – Hatboro-Horsham with a 1-0 victory Sept. 9 while the division champion Trojans bested HH 3-2 Oct. 11.

“We’re excited for the game but also nervous because we lost the last game,” Malofiy said. “And we just have to come out with a lot of intensity and then probably beat them.”

Junior Lilli Kleiman pulled Upper Dublin to within 2-1 on her goal at 28:12 but Malofiy’s block that led to her collecting a brace had Hatboro-Horsham back up two with 22:07 on the clock. Levin’s well-struck free kick made it a three-goal advantage at 19:59.

“We were building, we were going, again the problem is we’re chasing the game and we can’t afford to make mistakes,” Cardinals coach Chuck Gesing said. “And when you do you get punished. The key would have been to not get behind early but you got to play the hand you’re dealt and we did and we got behind early, Lilli gets one back and we’re building, we’re building and a critical mistake and there’s the game right there unfortunately.”

Upper Dublin, which won just one of its 10 games in last year’s COVID-19 shortened campaign, reached the District 1 postseason for the first time since 2018 with a strong finish – the Cards came into Tuesday having won three straight and seven of their last eight.

The loss denied UD its first district win since 2017 with the Cards ending their year at 12-4-3.

“I said to the girls yesterday, I said A, don’t look past this game and B, it is always difficult to beat somebody three times in a year,” Gesing said. “I mean, you know each other. Statistically you’re probably not going to do it. We play again tomorrow, if we played again tomorrow it could be a different result but you factor in everything, no excuses, they brought it.”

Malofiy’s first goal, which put the Hatters up 1-0, also came from outside the 18-yard box. The sophomore opted to unleash a shot from the right side from around 23 yards that sailed over the keeper at the near right post and in at 26:18 in the first half.

“The wind helped me with that obviously and I knew I could take that shot from there because I’ve done it before,” Malofiy said.

Malofiy used her speed to set up Hatboro-Horsham’s second goal, getting a step ahead of a defender after bursting down the right sideline then delivering a cross as Hewish raced into the box. Hewish pounced on a loose ball and touched it between the keeper and the right post for a 2-0 lead at 13:56.

Caroline Shegogue came close to give the Hatters a third before the break but her long-range effort from the right side knocked off the crossbar and out for a goal kick.

“All credit to Hatboro, they came out with a game plan, they got us on the back foot, they got us chasing the game and we kind of played into them,” Gesing said. “We panicked a little bit, played a little too direct and they handled it. They won the game, my hat’s off to them – no pun intended.”

Kleiman got the Cardinals back into the contest, the junior getting the ball in the middle of the field then placing a shot into the right side of the net, cutting the deficit to 2-1 at 28:12.

On a free kick inside the Hatters half of the field, Upper Dublin tried to play the ball low into the box but it was cleared. UD regained possession and was looking to send the ball back upfield when Malofiy jumped out to come up with a block then proceeded to put in her second tally on the breakaway.

“I will take the blame for that one – as Bliss (Brenner) went to play it, I said try to get it wide and Bliss did,” Gesiing said. “The third one, the girl was just quicker and she pounced on it and our keeper’s in no man’s land and they score and that’s that. And that’s kind of the game right there.

Levin increased the margin on a free kick from 28 yards out from the field’s left side. The sophomore arched a right-footed shot that dropped into the top left corner, the keeper getting a hand to it but could not prevent from going in for a 4-1 HH lead.