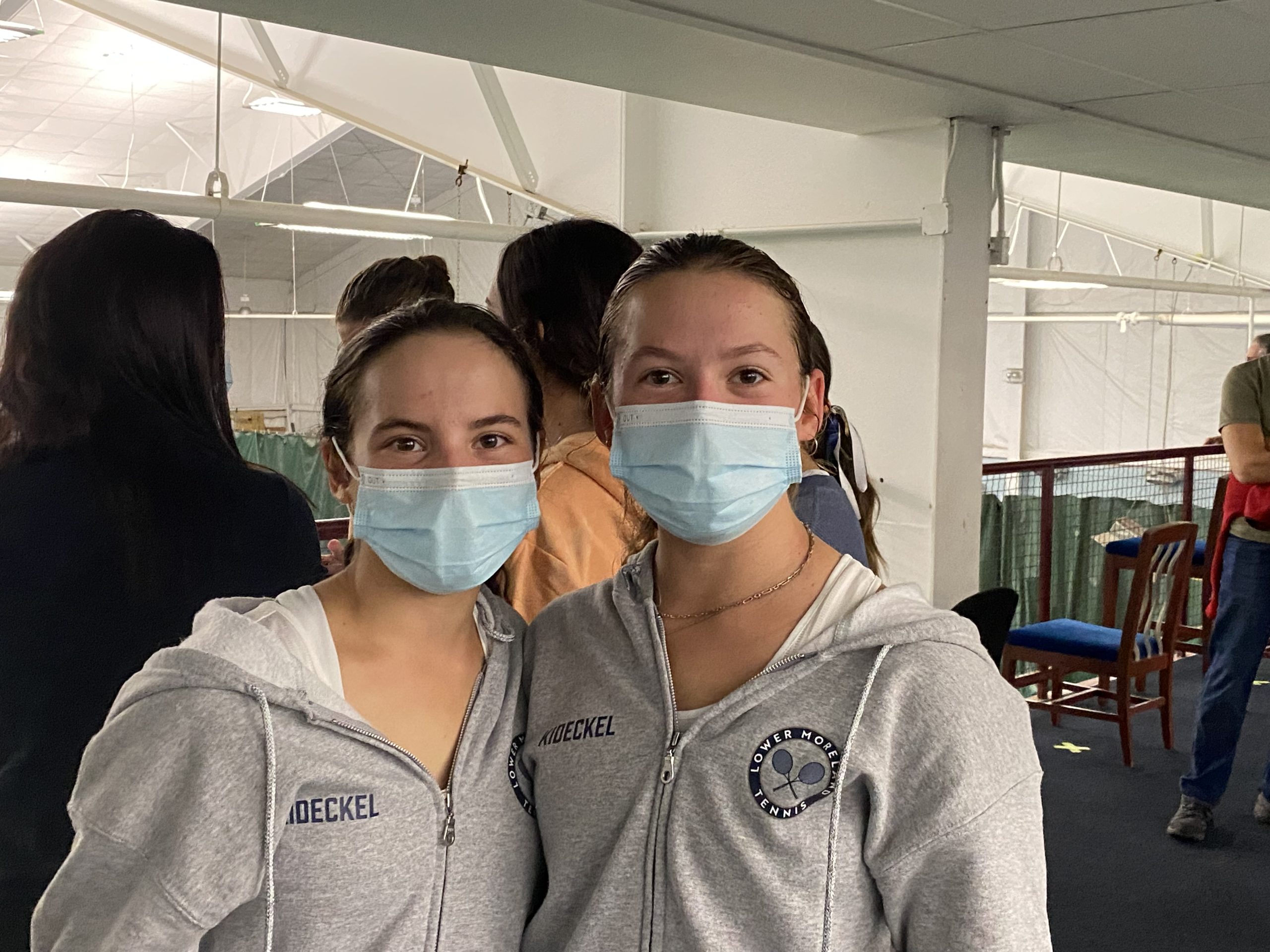 PHILADELPHIA >> Firmly in control of their singles matches, the only suspense for Hannah and Rebecca Kideckel was which of the Lower Moreland freshman would finish first.

“The last game was sort of a race,” Hannah Kideckel said.

Hannah secured her win a point faster than her twin sister, the two 6-0, 6-0 victories at first and second singles helping the Lions girls tennis team earn a 5-0 win over Lansdale Catholic in the PIAA Class 2A team tournament first round Tuesday at Legacy Youth Tennis and Education.

“She finishes before me a lot of the time,” Rebecca Kideckel said.

Older sister Sarah Kideckel, a junior, claimed a 6-2, 6-1 win at third singles over Ella Moran while Lower Moreland’s double pairs – Madison Sopinsky and Erica Stone at first, Catherine Lemiasheuski and Anya Yang – dropped just one game as the District 1 champ Lions advanced to the state quarterfinals for the sixth time in the past seven seasons.

“We don’t know what the other team is going to be like but we just want to go in there with a positive mindset,” Rebecca Kideckel said.

The loss was the first of the year for District 12 champ Lansdale Catholic (17-1) but the day’s result did little to diminish the team’s accomplishments for Crusaders coach Wendy Bradshaw.

‘I feel like this team is just an amazing team and we had an amazing record,” said Bradshaw, in her seventh season with LC. “We just happened to play a team that has three tournament-level players at their top and that’s tough, that’s a tough draw. And so they all fought hard, that’s all you can do.

“You make yourself proud, you play your hardest, you make your school proud, they’re honest, they have integrity, they played hard, that’s all you can ask.”

It did not look like the Crusaders would make their first PIAA appearance since 2018 at the start of the season when they only fielded six players but the addition of Luisa Gross, a German exchange student, gave LC a full lineup and it bested every opponent until running into the Lions Thursday.

“We’re like begging people to play and we thought OK we have to maybe teach somebody,” Bradshaw said. “And we had an exchange student from Germany who came two weeks into the season and she knew how to play tennis from gym class in Germany. And she ended up rounding out our seventh player but she was good.”

“So we had our seven and we went undefeated to 17-0. Like, who does that with only seven people and we would show up and play teams with 25 people and beat them.”

Lansdale Catholic’s 17-0 start included claiming the Philadelphia Catholic League title for the first time since 2010 and the just the second time in program history.

“They really, really gel as a group of girls and they have so much fun together,” Bradshaw said. “And they love to play tennis and they work hard and they play hard.”

Even though Hannah and Rebecca Kideckel are fraternal twins, their tennis games are not exactly similar, staring with the fact that Hannah is left-handed and Rebecca is a righty.

“I go for the winners and she is really consistent,” Hannah Kideckel said.

“I never played her before,” Hannah Kideckel said. “The first game was long but then I sort of got less nervous. I was very nervous.”

Rebecca Kideckel followed with a win shortly after, not dropping a game in besting senior Heather Carr at second singles.

“I went into the match knowing it would be not so tough and I was trying to be more aggressive and work on my shots,” Rebecca Kideckel said. “And I didn’t pretty well 6-0, 6-0 not much you can complain about.”