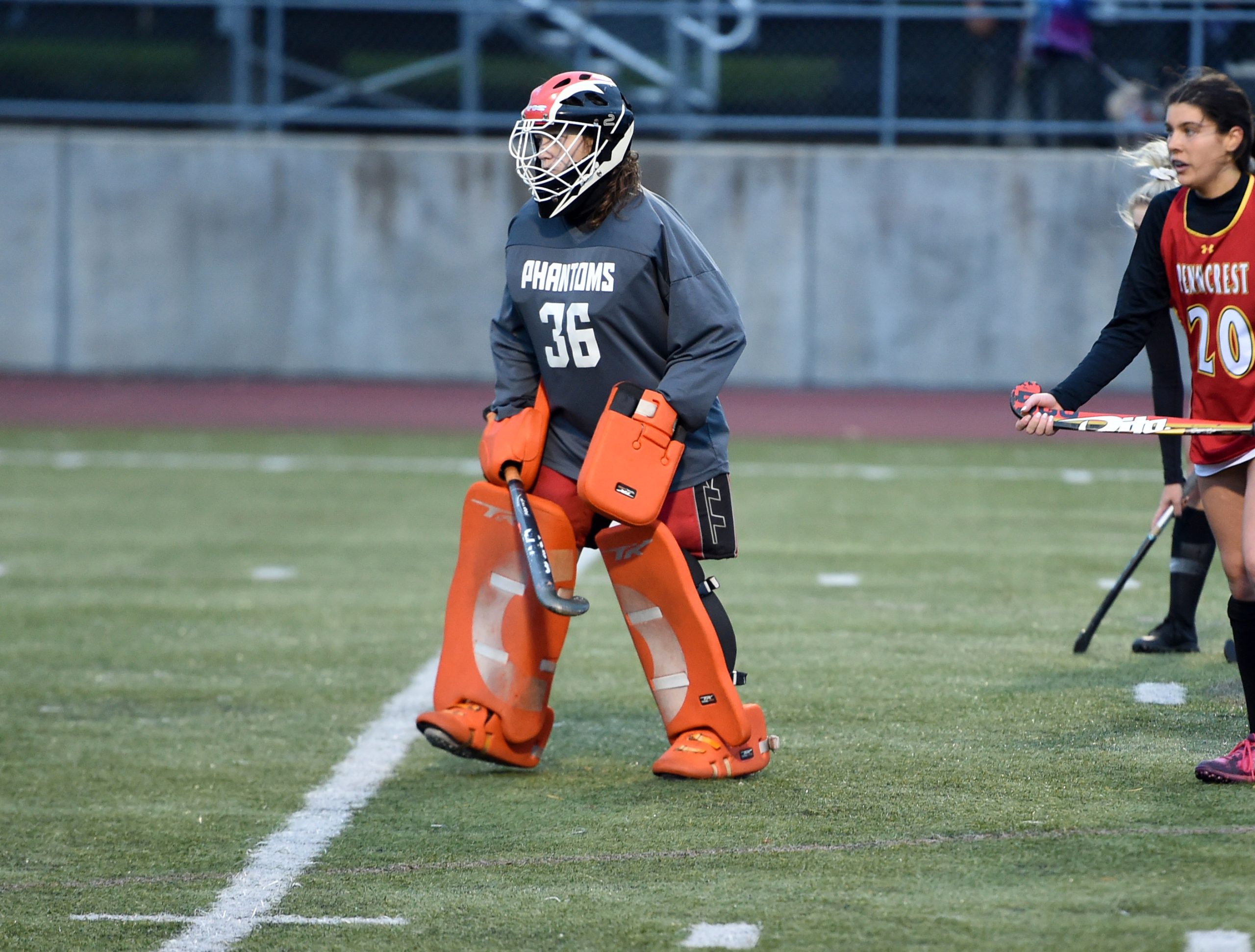 PHOENIXVILLE >> Penncrest had Phoenixville on its heels for the majority of the fourth quarter in Tuesday’s District 1 Class 2A field hockey game.

On the final play of the game, Phantoms’ senior goalie Sophia Greenwalt decided to flip the script.

Greenwalt sprung out of the cage on a Lions’ corner with no time left, to make one final save and deter the rebound attempt wide as No.7 Phoenixville held on for a 2-1 win over No. 10 Penncrest.

“Communication was the number one key on that last corner,” Greenwalt said. “We had to go hard the last minute, and that’s what we did. That’s pretty much it.”

FINAL: Phoenixville 2, Penncrest 1. … Sophia Greenwalt a clutch save with no time left. pic.twitter.com/Kr8ok0NhwD

Tuesday’s victory marked the first district playoff win for the Phantoms since 2018 after first-round exits in their past two postseason trips. They will play No. 2 Upper Perkiomen — a 4-0 winner of No. 15 Mount St. Joseph — at the Indians on Thursday.

“Everything we’ve ever worked for just all came out tonight,” senior Gianna Thaxton said. “Having the feeling of walking out as round-one winners is something so incredible.”

Phoenixville’s Gianna Thaxton, right, and Penncrest’s Liz Hussey fight for the ball Tuesday at Phoenixville during a District 1-2A first round game. (Owen McCue – MediaNews Group)

Grosso opened the scoring with a tip-in off a long ball from Thompson with 1:15 left in the first quarter. After intercepting a pass deep in Penncrest territory, Thompson scored unassisted on a reverse chip with 49 seconds to play in the third to extend the Phantoms lead to 2-0.

Despite the two-goal lead, the Phantoms knew there wouldn’t be any coasting to victory after already having survived a 4-3 victory over the Lions earlier this season, Oct. 1.

“I think for me a big thing is not getting too big of a head when we are up by numbers because we played this team before and they have gotten a lead on us when weren’t playing our hardest,” Thompson said. “A big thing for me as a captain was making sure our team was still playing 100 percent.”

It didn’t take long for the pressure to crank back up on the Phantoms.

Penncrest junior Kyra Curci finally broke through off an assist from senior Jane Yosua with 10:46 to play to make the score 2-1.

The Lions kept play in the Phantoms’ end of the field for the majority of the fourth, but Greenwalt and a defense led by Thaxton held tough, successfully defending five of the Lions’ six corner attempts in the fourth.

“Their goalie (Greenwalt) was really good, and she came out really far,” Penncrest coach Caitlin Pettit-Morgan said. “It’s something that we’re not always used to, and it’s hard to kind of practice against that, especially when you’re not used to it.

“That was the difference between other games and not being able to really finish. We wanted it, but we just couldn’t kind of figure it out and ran out of time once we did.”

Penncrest goalie Delaney Hewlings made two saves. Greenwalt was credited with five in the game, though her aggressive style of play had much more of an impact.

Thaxton, sophomore Natalia Thomas,  freshman Kylie Moore and senior Sydney Eckhart were among those making plays on Phoenixville’s backline in front of Greenwalt as Curci, Yosua and Liz Hussey kept the pressure on for Penncrest.

“We held each other up, and that was the determination. Holding each other up and going harder than Penncrest.”

This was the first postseason experience for Penncrest’s senior class as the group of Hussey, Yosua, Sara Kristiansen, Alana Laliberte, Sofia Saulino and Sam Woolery guided the Lions to their first District 1 tournament appearance since 2017.

“Coming off last year, they were just excited to play,” Pettit-Morgan said. “But this senior squad, they worked together. They were the first cohort from our youth program to go through the youth program when it started, so it really meant a lot for them to set the bar for that and show what progress our feeder program has made.

“They’ve been playing together forever and you can see it on the field. It’s a great group of girls, and I think it means the world to them to be here tonight.”

The Phantoms seniors, including Greenwalt, Thaxton, Thompson and Eckhart, were happy to host their first playoff game since their freshman seasons — particularly after going home with a victory.

“The atmosphere — having this night and having the lights down on us — was definitely something special,” Thaxton said. “Having the community of Phoenixville support us the whole game … that uplifts us to know we have that back there.”