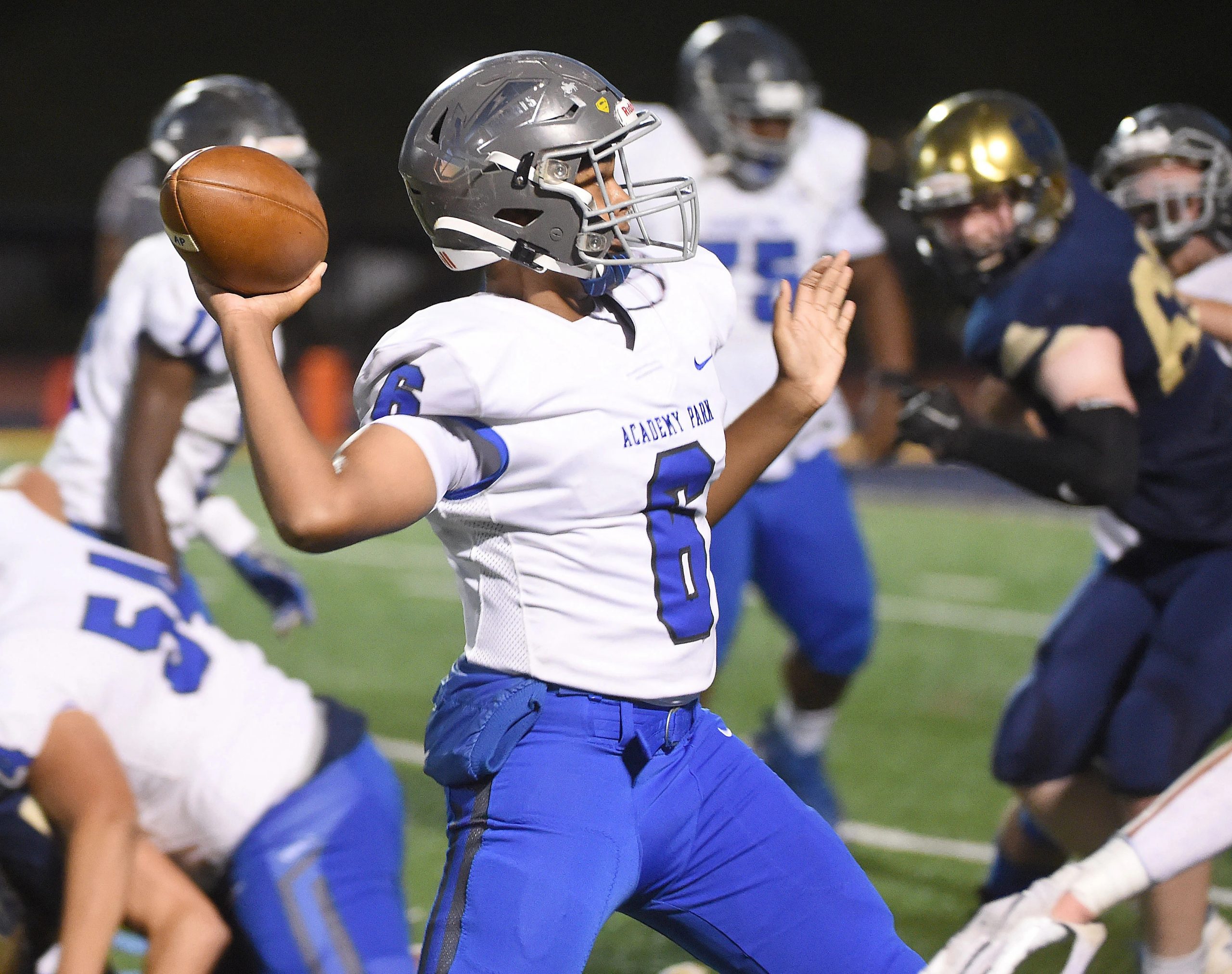 YEADON — The plan for Joe Davis going into the 2021 football season may not have placed him as the Academy Park workhorse back by Week 9.

But plans around the program often evolve, just as the talent within it does. And Davis’ domination of Penn Wood Saturday was proof positive.

The senior running back ran for 182 yards, including touchdowns of nine, seven and 62 yards as AP made quick work of Penn Wood, 49-0, at Kerr Field.

The reason Davis is able to step up in moments like Saturday is that AP’s success depends less on any individual than the structures around them.

“Our blocking, our line was doing what they had to do today,” he said. “It made everything how it was supposed to be and all smooth.”

Hence the 340 rushing yards, with all seven TDs on the ground. And the two 100-yard rushers, with Davis and Mikeel Ruddi hitting the mark. All that when Ibrahim Sanogo and Eric Willis, who shouldered the ball-carrying burden in the long-ago opener, combined for just four offensive touches. And when Terrence Oliver, the next next-man-up, missed the game due to injury. Yet the Knights (6-2, 2-0 Del Val) rolled to set up a showdown with Chester next week for a share of the league title.

AP had nine possessions; seven ended in touchdowns, the other two with the end of a half/game. Davis capped a nine-play, 72-yard drive with a nine-yard score at 4:37 of the first quarter to put the Knights up 8-0. Quarterback Darrell Fields did the honors on the next two drives. A nine-play, 55-yard march culminated with Fields high-stepping 15 yards to paydirt to make it 16-0. A short field on the next series allowed Fields to dash seven yards over the goal line to make it 22-0.

Davis finally broke the big one at 4:23 of the second quarter, after being one tackle away from it many times. On this inside handoff, he got to the second level and left the Penn Wood defense in his 62-yard wake.

Darrell Fields to Eric Willis for 44 on the first snap of the third quarter.
Joe Davis in from the nine 2 snaps later.
Academy Park 37, Penn Wood 0 pic.twitter.com/vP9otnu8m6

Fields managed the game in the first half with 44 passing yards. He matched that on the first snap of the second half, hitting Willis on a 44-yard go route. Two plays later, Davis stretched the ball over the goal line on a seven-yard score, all but ending the day for the first-stringers. Fields was 7-for-8 for 88 yards and ran for 25.

Penn Wood struggled mightily in being shut out for the second consecutive week. Missing starting quarterback Jason Krempf, the Patriots tried four signal-callers under center to no avail. The Patriots had 26 yards of total offense. Jayon Hailey provided 31 rushing and the five receiving yards.

Hailey also returned a kick 33 yards in the second quarter to give Penn Wood its best shot to score. But it squandered the short field, Kivaleon Clarke throwing an interception to a sliding Ashton Clarkson in the end zone. About the only bright spot was punter Marques Sakor, who boomed a pair of 40-yarders and averaged 31.8 yards per kick.

For Davis, the win is another step in the right direction for a group that is growing together.

“I feel like it makes everybody stronger,” Davis said. “If people do step up, it makes them stronger, it makes the whole team stronger. … We all know how to come together as a team, get the job done.”