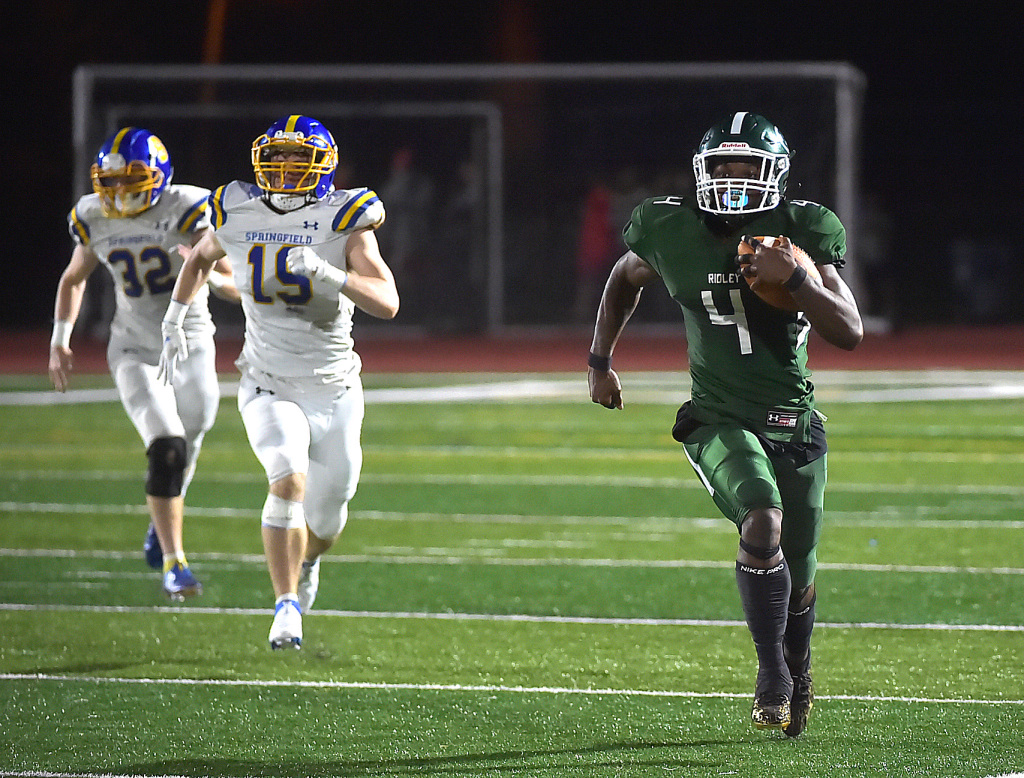 Tahir Mills scored five touchdowns as the Green Raiders topped the 60-point mark for the second time in three weeks with a 63-0 victory over Penncrest Friday night at Louis Scott Stadium.

Ridley has outscored its last three opponents, 182-6, and has scored at least 37 points in each of its last six games. The Green Raiders (8-1, 7-1 Central) are averaging 43.7 points per game.

“I never expected us to be in this position,” Ridley coach Dave Wood said. “I thought we would have some growing pains but our offensive line has played above and beyond and (quarterback John) Heller and Mills have been playing lights out.”

Mills set the tone early when he returned the opening kickoff for a touchdown. He would add two rushing touchdowns and two receiving.

Heller continued his stellar play. He threw three touchdown passes one week after he set a Ridley High record with 415 passing yards in a 49-0 victory over Lower Merion.

“John Heller is really taking advantage of what the defense gives him,” Wood said. “If the other team is playing tight to stop the run, he checks to the pass. If they’re giving us the run he takes that. He’s really doing a great job. It’s really amazing to see how much he’s grown from last year.”

Backup quarterback Ryan Carroll, who’s just a freshman, also got into the act with two touchdown passes. The defense posted its second straight shutout and third of the season. Mike Kelly led the charge with 12 tackles, and fellow linebacker Paul Jackson had 10 stops. The Green Raiders forced four turnovers.

Ridley closes out the league schedule next week at home against Conestoga (7-2, 6-2). Both teams are playing for a home game in the first round of the District 1 Class 6A playoffs. The Green Raiders are seventh in the district rankings, and the Pioneers are eighth. The top eight teams host first-round games.

“This is probably the best all-around group I’ve had since I got here,” said Wood, who is in his sixth season as the head coach. “And the great thing is, they’re all young kids. We only have four or five seniors.”