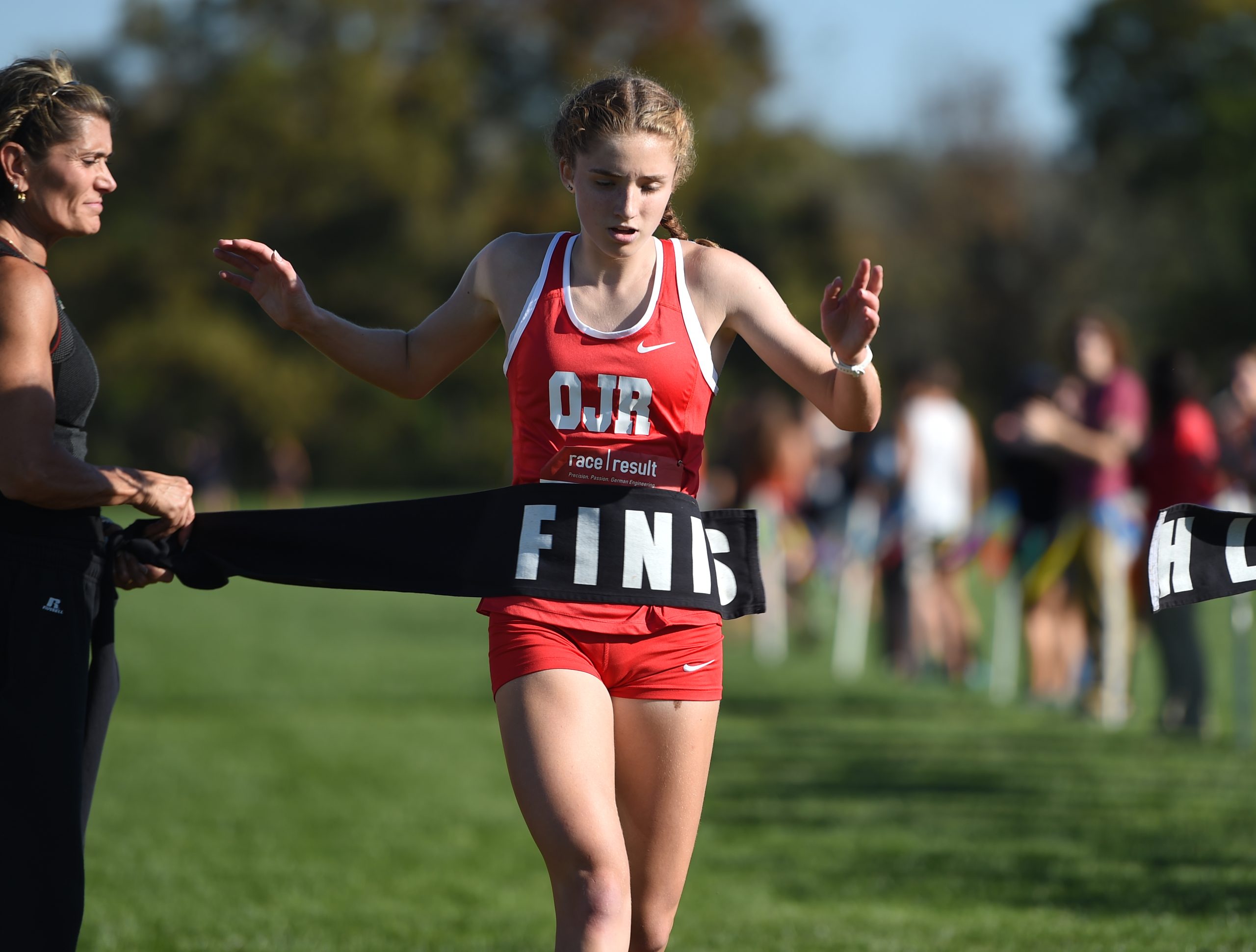 WORCESTER >> It wasn’t a case of the big schools dominating the small ones Thursday.

To be sure, the Liberty Division boys had the upper hand on their Frontier Division counterparts during the Pioneer Athletic Conference’s championship meet at Heebner Park. But on the girls’ side, the small schools held their own against the bigger ones … and then some.

Owen J. Roberts produced the individual winners — Andrew McGonigle for the boys, Claire Zubey for the girls. But while the Owen J. boys came away with the team title, Phoenixville ended up the girls’ team champion ahead of three traditionally-powerful big schools.

But the facts were solidly incontrovertible. The Phantoms placed three runners among the first six and four in the Top 10 for a total of 23 points ahead of teammate Nevava Carr’s 17th-place effort. The 40-point total was seven ahead of Roberts, which had only one runner other than Zubey (Ava Taylor, seventh) in the first 10.

“It’s an honor to run against girls from great programs like those,” Sprenkle said after his squad win a team championship for the first time in its PAC membership. “It’s quite an accomplishment.”

The boys’ finish proved to be the closest of the two varsity races, McGonigle finishing just five seconds (16:11) ahead of Methacton’s Vaughn Lackman in a run he led basically wire-to-wire. Ironically, the race didn’t go the way he planned.

“It was not my goal coming in,” the OJR junior noted. “I wanted to be relaxed and be in the (front) pack. But with nobody pushing it, I just went to the front.”

Between McGonigle and teammate Thomas Damiani, who finished fourth in 16:41, were Lackman and Warrior teammate Bryan Landsberg (16:38). They crossed the line in that order ahead of Spring-Ford’s Quintin Smith, who clocked a 16:45.

“He was hanging on me the whole time,” McGonigle said of Lackman. “I tried to make my kick at the turn (into final straightaway), but my legs didn’t have it. I just wanted to hold my top speed.”

The third member of Methacton’s Top Three, Chris McGlynn, joined his teammates in the early push of McGonigle, who ran a 5:13 pace. McGlynn dropped back to a seventh-place (16:59) finish ahead of Phoenixville’s Yash Agnihorti (16:55).

“I didn’t want to take it out too fast,” Lackman said. “I just sat on him (McGonigle). I tried to make a few passes and make my move over the last 300, but I ran out of energy.”

The girls’ race was also a wire-to-wire run for Zubey, who placed third when the meet was last run in 2019. She crossed the line at 19 minutes, more than a half-minute ahead of Cagliola (19:31). The Phoenixville duo of Kenzie Padilla (19:43) and Anna Carruthers came in 3-4 followed by PV’s Summer Watts (19:55), the defending girls champion.

“I went out a little fast,” Claire said. “My goal was I wanted to go out fast and be strong. After that, I was able to relax.”

For Cagliola, the defending District 1-AA race champ, the opportunity to run against the PAC’s bigger schools was a further solidification of her standing as one of the region’s top runners.

“It’s another year of maturity,” Lisa said. “Competition at a higher level … Claire pushed the rest of the field.”

Cagliola admitted to holding “a little bit of hope” for catching Zubey. But she amended her strategy after seeing the kind of lead Roberts’ fleet-footed junior had at the four-kilometer mark.

“It was stressful to get to her back,” she said. “I just wanted to keep my spot.”

Helping secure Phoenixville’s team championship were Griane Reed, sixth in 20:01; Alyssa Cunningham, 10th in 20;11; and Carr. It surpassed the Phantoms’ runner-up finish in 1990, when former PAC member Great Valley was in the third year of a four-year team-championship string.

“It was a matter of trusting the process of training,” Sprenkle said. “Not worrying about outcomes — they can be burdens — but staying focused.

“I have overwhelming gratitude for being able to coach these kids. “They have strong personal character … they’re united and focused on the goals they’re trying to accomplish.”