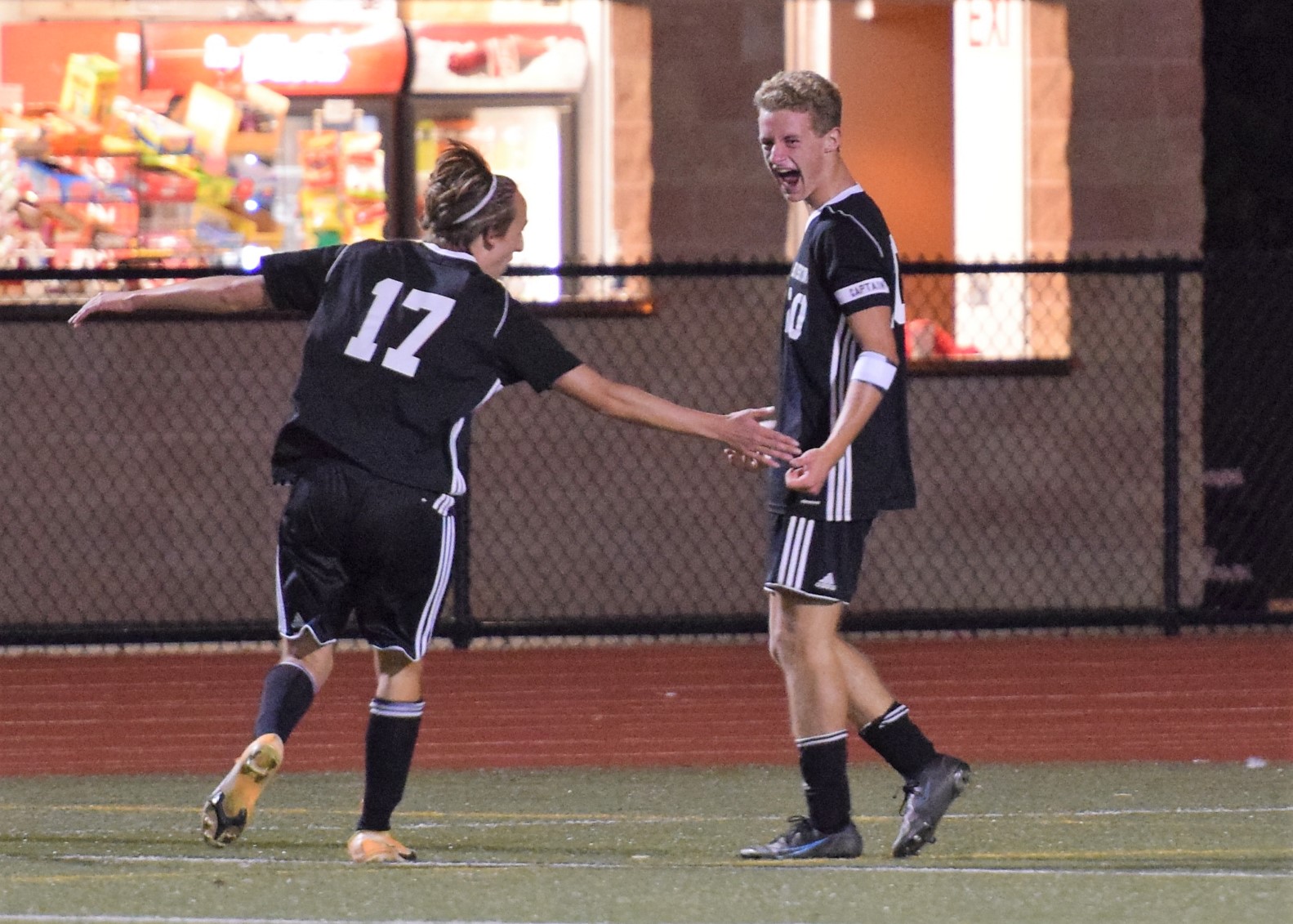 BUCKTOWN >> A penalty kick miss has rarely been a good thing.

It just might have been for Beckett Wenger and the Boyertown boys’ soccer team Tuesday night.

Despite having his penalty kick saved by Perkiomen Valley goalkeeper Justin Angelo early in the second half of their Pioneer Athletic Conference semifinal, it only served to turn the All-State senior forward into a man on fire.

“I’m scoring three,” Wenger said as how he processed the penalty kick miss. “I made a bet with a friend at lunch that I’d score two. I guess I overdid it.”

That’s exactly what he did.

Wenger was the hat-trick hero as he responded with three goals to lift Boyertown over Perkiomen Valley 3-1 and into the PAC championship game.

The No. 1 seed and Liberty Division champion Bears will face No. 3 Methacton, a 2-1 winner in penalty kicks over No. 2 Upper Merion in the other semifinal.

Boyertown was PAC champion a year ago in the pandemic-altered season. With the Final Four playoff format back, the Bears want to show their stuff on the big stage.

“This year we can control our own destiny and make a statement, prove to the PAC and the district that we are No. 1,” Wenger said.

Wenger responded less than three minutes after his PK miss with a marauding run from midfield, carrying to past the defense and blasted a rising left-footed shot into goal for a 1-0 lead with 35:53 to play. He doubled his total less than two minutes later following a through ball down the left side and finished with a chip shot over the crashing keeper. Wenger sealed it on a rising header with 2:49 to go upon beating Angelo to a high-bouncing loose ball in the penalty area.

“It was fantastic,” senior captain Justin Patten said of Wenger’s performance. “Once I saw him miss I was like, ‘There’s no chance he’s not scoring another one. He’s gonna get at least two more.”

Perk Valley replied quickly following Wenger’s second score when Javier Schorle finished a scramble set up by Leon Kanopka to make it 2-1 with 33:07 to go.

Perk Valley was never able to create another golden opportunity, held at bay by the Bears’ defense and goalkeeper Nick Rothenberger (3 saves). Wenger praised the contribution of Nathan Seip, who started in place of injured outside back Matt Selders.

“I felt we did pretty well,” Patten said of the Bears’ defense. “A few mistakes here and there but nothing too big. We did a fantastic job of locking down the players we needed to and containing them.”

Despite the scoreless first half that didn’t force either keeper into a save, Wenger loved the tone the Bears set.

“The first half we came out with a lot of intensity. A lot of the season we haven’t come out intense. but today we switched it on,” he said. “I thought that really intimated the other team and set the tone.”

Perk Valley (11-7) will continue in the District 1-4A postseason. It’s currently the No. 12 ranked team.

He may have been the perfect person for the task.

It would be hard to debate Steve Remish’s qualifications for handling the penalty-kick phase of Tuesday’s PAC Final Four playoff game between Methacton and Upper Merion. The Warriors’ goalkeeper did double duty, protecting the cage against the Vikings’ kickers … and taking the deciding shot.

He came up big on both counts. Remish hit the third of Methacton’s tries, then stopped three shots to secure a 3-1 lead in PKs, and his team’s 2-1 double-overtime win over UM.

“I’ve shot all my life,” he said. “I have the confidence and the ability to do it.”

Preceding Remish’s conversion were successful PKs by Otto Hull, who scored for Methacton in regulation time for the leveling score, and Braden Kavanagh on the third try. The second one hit the crossbar.

Remish’s head coach, Dave Stevenson, noted his keeper “always wanted to be a forward,” but the need was for him to play in the cage.

“This was his redemption,” Stevenson said. “We worked on it in practice (Monday). He was ready.”

“I know the spot where to put it,” Remish added. “Middle right up top.”

Both teams had numerous opportunities to score after Hull’s tying goal with 22 minutes left in the second half. Methacton had two in the remaining regulation time, six in the first OT and four more in the second. In the first extra frame, the Warriors had three tries in a span of 98 seconds and three more in the final 3:32 of the second overtime.

Methacton is into the final in its first visit to the PAC Final Four since joining the league in 2008.