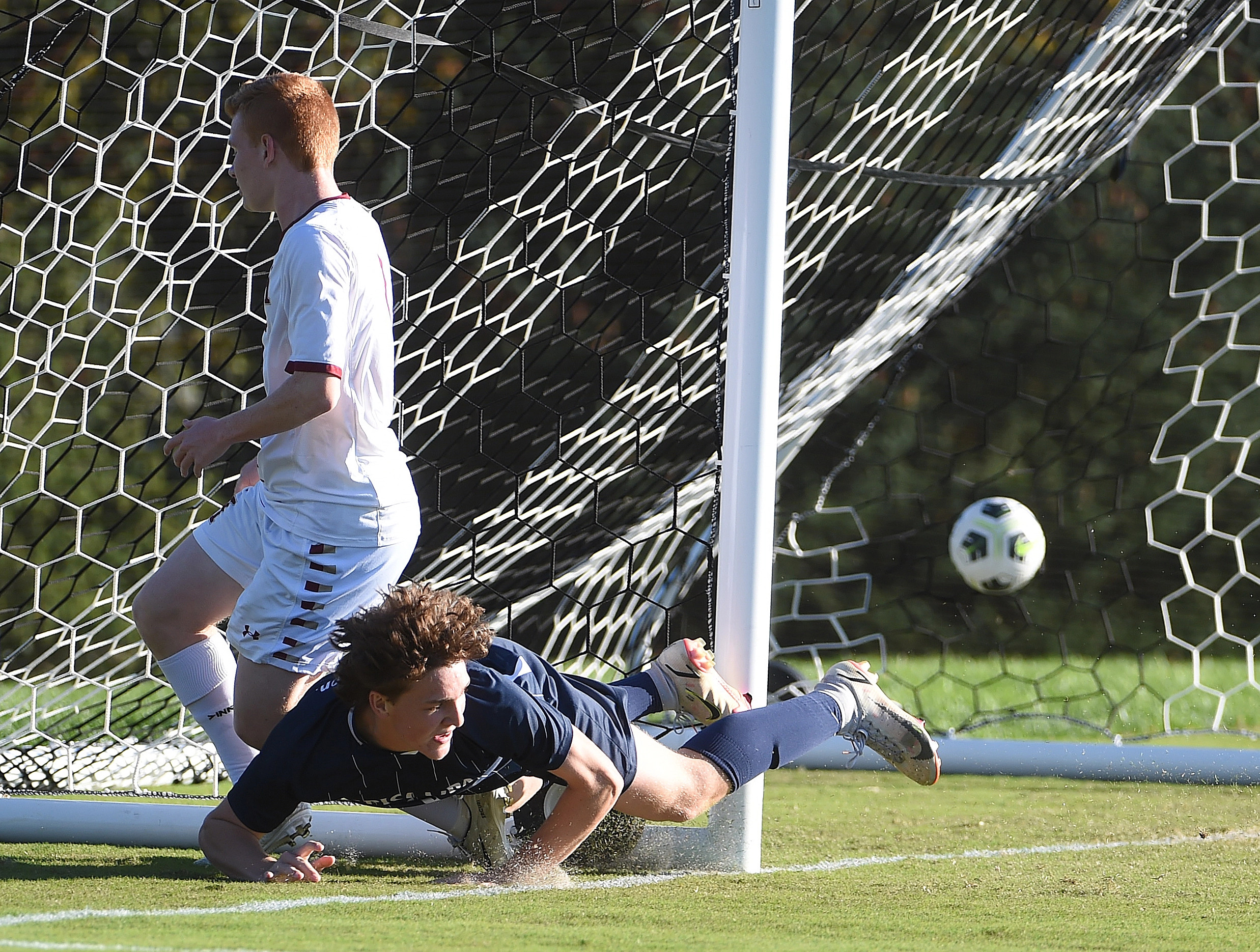 Episcopal Academy's Jack Bonner, center, starts to celebrate as his goal ripples the back of the net in the first half against Haverford School on Tuesday. PETE BANNAN - MEDIANEWS GROUP

NEWTOWN SQUARE — Getting his first start of the season Tuesday afternoon was reason enough for Milo Michalczewski to be pleased.

Having a hand in two goals and scoring the game-winner for Episcopal Academy in a rivalry showdown with Haverford School took it to another level.

“Thrilled,” Michalczewski said after the Churchmen closed out a 2-1 victory. “Thrilled, but I give credit to my teammates and my coaches for trusting in me, and I’m really happy with the result.”

There was plenty of credit for Michalczewski, who stepped in with leading scorer Alex Barrist out. It was one of several alterations, even before on-the-fly adjustments were required in game. But that Michalczewski could step up, and the pieces could flow around him into new roles, is indicative of EA’s depth.

Both of the Churchmen’s goals came in the first half. The first was an impressive team goal in the 12th minute, begun by a sublime switch of fields by Brad Johnston. His ball, from left center-back, perfectly picked out Michalczewski on the right wing to instantly shift the point of attack.

Michalczewski attacked the aerial ball with a proactive header flicked forward. That allowed the speedy Sam Malloy to beat his man, further knocking the Fords backline out of shape. He rifled a cross through the area, far enough away that goalie Connor Cresswell couldn’t collect, and onto the charging back-post run of Jack Bonner to pound it into the net.

“Milo is one of our best technical players on the team,” Johnston said. “It’s good to see him on the field. I saw some space out there, saw a long ball, and Milo … flicked it on and Sam Malloy did the rest.”

“I trust Sam,” Michalczewski said. “He’s so hard-working, I knew if I got any type of flick on that, he’d run past that defender and put it in to the box. He got on the end and put a great ball in to Jack Bonner.”

The second goal was all Michalczewski. All game, EA had executed an effective press. With numbers up the middle of the pitch, the Haverford center backs were given license to roam, knowing they’d find their way into blind alleys patrolled by blue shirts, but chances came from the EA wingers jumping on Haverford defenders when they moved wide.

So when center back Z Nekoumand took an innocuous looking goal kick and tried to play toward the left touchline, Michalczewski pounced. He picked the defender’s pocket, took a touch, spotted Cresswell off his line and chipped a stupendous shot to the far corner.

Out of seemingly nothing, EA led 2-0 with 12 minutes until the break.

“I’ve been keeping hard in practice for two months,” Michalczewski said. “I got my start today, I’ve been working hard for it, and I’m happy for my teammates, happy for myself and happy for my coaches giving me this opportunity.”

The goal was particularly deflating given that the Fords hadn’t played that poorly in the first half. They forced four saves from goalie Akira Heath, and while they often opted to shoot from distance instead of trying to connect in the final third, they posed a steady threat. Part of the trouble is they, too, were missing their top scoring threat in senior forward Torin McClave.

The teams went back and forth early, Nekoumand the first to test Heath with a rising shot from 25 yards that the goalie got his mitts on. The best chance came in the 18th when Nic Nekoumand won a duel and was in alone, but Heath stormed off his line to smother the attempt.

EA effectively turned the game into a midfield scramble after the break. Matt Pressler, thrust into striking duties, couldn’t calibrate the sights on a pair of dangerous free kicks. He did find the assist, though, eight minutes from time on a corner. It required a whiffed clearance by EA to allow the ball to find Andrew Kirwan’s flashing near-post run, and the junior midfielder got sufficient power on the shot to knock it off the gloves of Heath and in.

“We were down 2-0 and we were just trying to get a goal,” Kirwan said. “Lucky bounce to me, I tapped it in, it really got us back in the game. I thought we really created chances well after that, but we came up short and it’s disappointing.”

Johnston and fellow center back Tristan Whitaker remained firm in the middle to make sure the Fords took the shots that Heath could handle.

“First of all, it’s confidence in our goalkeeper, Akira,” Johnston said. “We’re willing to let them shoot from pretty far out because we know he’s going to handle those. But also I think we’ve got some pretty good organization on our team. We talk well, and matchup wise, we’re very big, very physical.”

EA adjusted as need be. That meant Malloy playing up top in Barrist’s absence, most of the way, then sliding into midfield late and doing a turn at center back when Johnston was off having a cut bandaged. Eddie Jones supplied an effective shield in midfield, and Malloy and Mark Dwonzyk provided essential hold-up play to defuse threats late.

That team aspect, absent Barrist, is what stands out most to Michalczewski, even on his milestone day.

“It boosts our confidence,” he said. “We love Barrist; he’s such a hard-working kid, but it really just goes to show that we’re a good, hard-working team. Our teamwork is amazing and we trust our game plan.”

Penncrest 2, Springfield 1 >> Connor Kraycik scored twice in the first half to lead the Lions to the victory. Jackson Meile made it stand up with six saves.

Joseph Nweke scored after the break for the Cougars. Jason Spacarelli made eight saves.