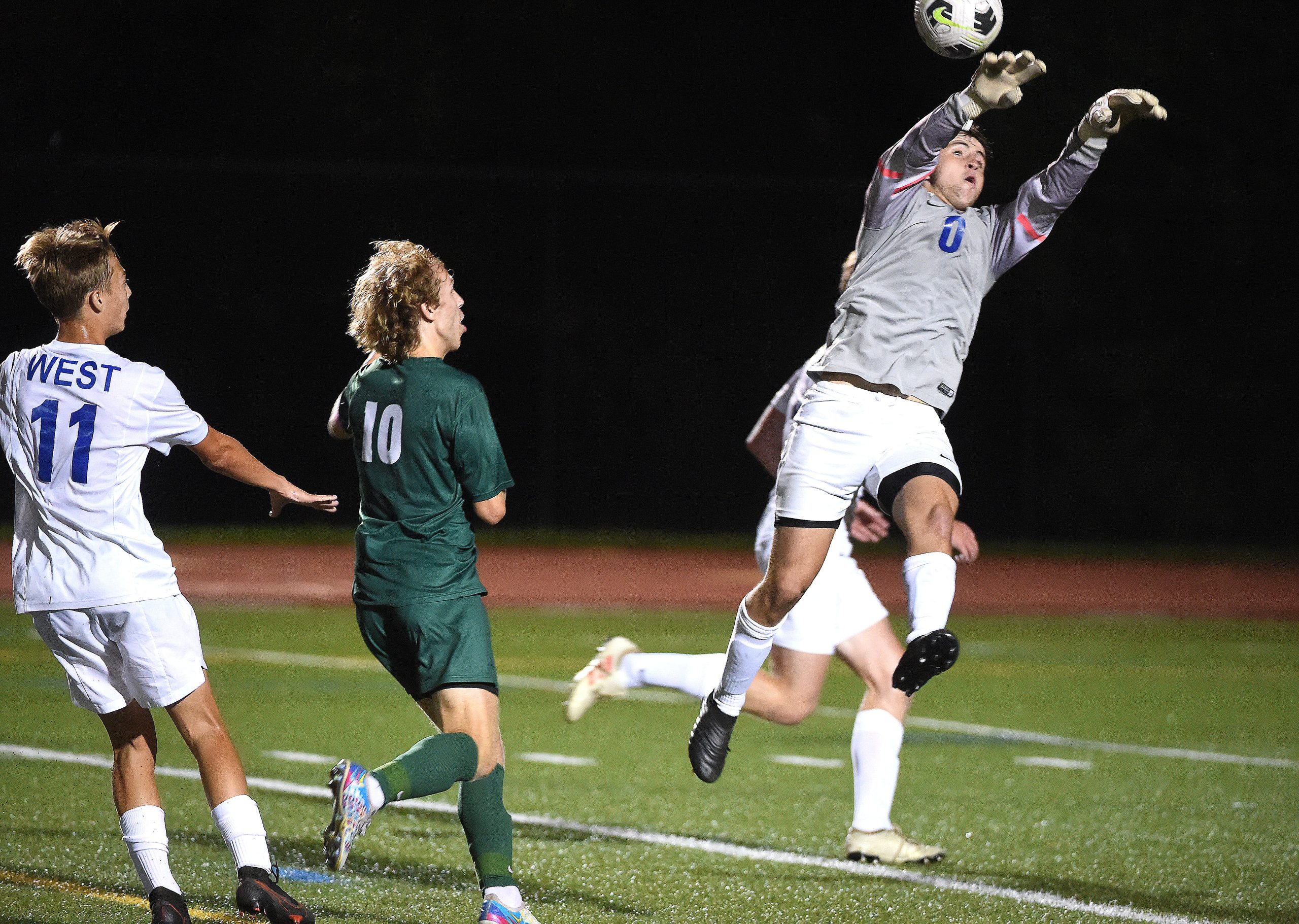 DOWNINGTOWN >> It was yet another example that the quest to capture even a share of the Ches-Mont boys’ soccer championship isn’t a sprint. It’s more like a grueling marathon.

Seemingly closing in on a title and playing at home on Senior Night, Bishop Shanahan faced a Great Valley squad fighting just to stay in postseason contention and not just looking to play the role of a spoiler. And the visiting Patriots battled the Eagles to a standstill for more than 108 minutes.

But with just a few minutes remaining in double overtime, Shanahan scoring wiz Zane Domsohn beat Great Valley keeper Seth Turner to a perfect looping pass over a couple defenders by teammate Evan Cunningham and deposited it into net to wrap up a thrilling 2-1 triumph at Jack Mancini Field on Tuesday.

“It was like a perfect situation: a game-winner on Senior Night and playing at home for the last time,” Domsohn said. “It was a perfect way to end it.”

Weeks ago, Domsohn shattered the school record for goals in a single season (24). The game-winner was his 31st and propels the Eagles to 9-1 in the league (13-3 overall) and into a two-way tie atop the Ches-Mont standings along with once beaten West Chester Henderson. Previously once-beaten Downingtown West fell at West Chester Rustin to drop into third place.

“As seniors, we want to go out with a title,” said senior forward Jaden Jones. “It would be a first for the program, so we want to win it very much.”

Ranked second in the latest District 1 3A power rankings, Shanahan will wrap up the regular season against Kennett on Thursday. Henderson still has to play Oxford before the finale against Great Valley (5-5, 9-7).

“A lot of coaches in this league say that this is the best Great Valley team by far in a number of years. And they gave us a heck of a game tonight,” said Eagles’ head coach Jim Kalavik.

“This shows that any team in the league can beat anyone. We have to be ready to play every night. You have to take everybody seriously because every game matters,” Domsohn added.

The Patriots entered the clash at 26th the District 1 4A power rankings, and longtime head coach Dave Moffett knows his team has work to do because only 24 will make the playoff field.

“This was all about us,” he said. “We needed a result here.

“I was proud of our kids’ effort. They have to keep positive and keep their heads up because we have two games to play.”

Following a scoreless first half, Jones put Shanahan ahead with 17:19 to go in regulation with a header off a crossing pass from teammate Paul Ziegler, who tracked down a ball near the end line.

“Paul crossed it from the corner. It was basically far post and I was there, and I got my head on it,” Jones recalled.

About five minutes later, however, Great Valley junior Rikin Rakesh notched the equalizer after taking a pass from junior Ved Law. Rakesh also had an earlier scoring chance, but his shot bounced off the far post.

“It was off a corner kick and our guys did a nice job of keeping it alive,” Moffett explained. “It came over to Rikin, who brought it down from his chest and just hit a tremendous volley.”

Each side had prime chances to end it before the OT, including a blast from Domsohn on the right wing that a diving Turner managed to turn aside.

“We show flashes of being (a great) team but we just aren’t as consistent as we need to be,” Moffett said. “We fight, and these guys attitude is great. But every now and then a lapse or a mistake ends up hurting us.”

In the opening 20 seconds of the first overtime, the Pats’ Dean Finan let loose a promising blast, but Eagles’ goaltender Bryce Domsohn made a diving save.

“Bryce is an amazing keeper and he comes up big in the biggest movements,” Kalavik said. “And he rarely makes a mistake.”

Nobody scored in the first OT session. But just prior to double overtime, Kavalik had an idea: “At the end of the first OT, the message I gave the team was that Great Valley’s back line was pressing high,” he said. “And even though we don’t do this very often, I said we should try to play it over the top.”

And that’s exactly how Cunningham and Zane Domsohn combined to end it with 2:35 remaining in overtime No. 2.

“Of course it was Evan Cunningham who knocked it over (Great Valley’s) defenders and Zane put it in the back of the net,” Kavalik said. “With the ball in motion and with Zane running behind it, you might as well put it up on the scoreboard before he strikes it.

“Zane is the most focused athlete that I’ve seen, and I’ve been coaching high school soccer since 2004. To have a player like him on the team is a gift.”

The final stats were quite even. Both sides earned five corner kicks. The Eagles had the edge in shots on goal, 14-9.

“Great Valley really gave us their all today. It really took a team effort,” Jones said.

“And it doesn’t surprise anybody that Zane got the winning goal. He’s been doing it for us all season.”