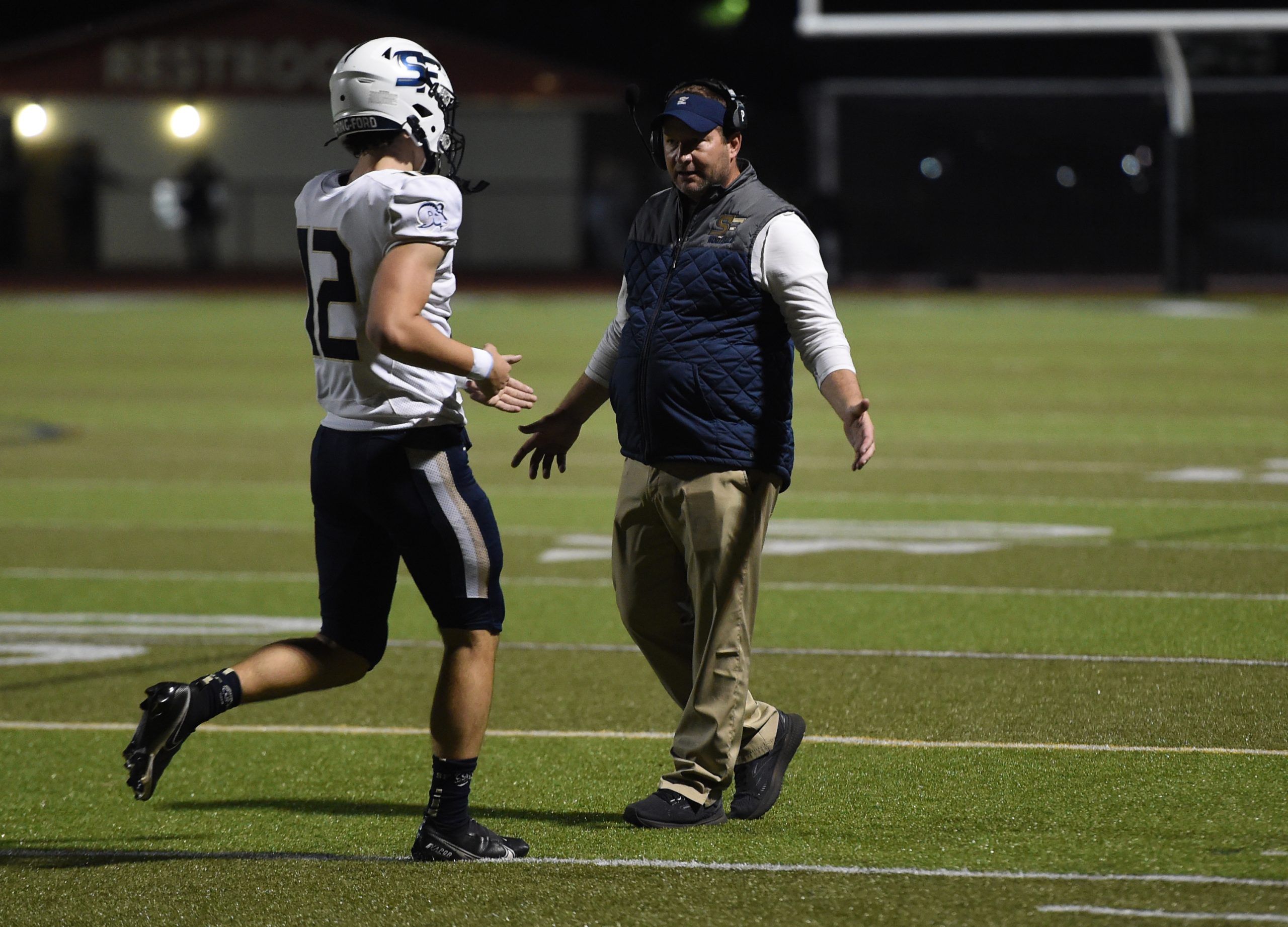 Ten Friday nights, or Saturday afternoons in a few cases. Maybe 11-12, if you’re lucky. In some cases, you might get to 15 if your team is truly special.

That’s all you get in high school football – all the hard work, the team bonding, the workouts in 90-degree heat or in the weight room during the dead of winter all comes back to those 10 nights every fall.

It can take a toll on kids, parents, band members, and especially coaches. So when someone finds their reason, their motivation to stick it out long enough to claim victory on 100 of those nights – at the same school – that person has found something special.

“I knew I had something special right away,” said Chad Brubaker, Spring-Ford’s head coach who claimed his 100th victory at the school Friday night against Methacton. “When I interviewed at Spring-Ford, there were multiple people in that interview room. [Former superintendent] Dr. Marsha Hurda, [former assistant superintendent] Dr. [Ken] Donahue, and of course [athletic director] Mickey McDaniel. In fact, Dr. Donahue still emails me every week just to check in and see how things are going.”

Dr. Donahue has certainly received his share of positive reports over Brubaker’s 12-year tenure. Four PAC titles, numerous District 1 playoff appearances, including a run to the district title game in 2012. But the fact that Brubaker’s still there, 12 seasons later, to provide the updates is the real victory in all of this.

“You get to work with these kids and see how they develop – maybe there’s a kid whose ability takes him to playing special teams as a senior but he’s out there, giving it his all every day,” Brubaker said. “Then there are kids with all kinds of ability, but they have trouble making the grades. It’s working with all of these kids and others that keeps us going.”

And when you’re around long enough, you get to see the outcomes. Gary Hopkins, a wide receiver on a couple of Brubaker’s earliest teams at Spring-Ford, is now back as an assistant coach. No doubt other former Rams will follow in Hopkins’ footsteps and return to a place they consider special – a lesson they learned from their head coach.

Asked for a favorite memory from his [first] 100 victories, Brubaker cited a contest against Owen J. Roberts in his inaugural season of 2010.

“We were both 2-0, and they [OJR] were favored to win the league that year,” he recalled. “We did a white-out, sold something like $12K in white-out t-shirts. ABC (channel 6) had a news van there, the place was packed.

“The look on the kids’ faces when they came out that night, saw the white out, saw the news van – that’s something that sticks with me.”

True to form, however, Brubaker quickly shifted the conversation to the 2021 squad. Friday was the Rams’ third straight win to go to 5-3 after a three-game losing streak at the start of September.

“We know we can’t really afford any more losses,” he said. “And we knew what we were signing up for with our non-conference schedule (contests against District 3 powers Cumberland Valley and Manheim Township.) Next week, we have Owen J. Roberts, and they’re coming in with a better record than us. That’s another big game.”

If they do win out, Spring-Ford will be in the 6A District playoffs, but likely starting on the road against one of the top 5-6 teams in District 1. Brubaker views it as an opportunity.

“We’ve certainly run up against some formidable foes in districts the past few years,” he said. “But I like going in as the underdog. There’s no pressure on us – we just go out and play our game.”

Perkiomen Valley receiver Dawson Debebe races toward the end zone on a TD reception during the first half against Boyertown Friday. (Austin Hertzog – MediaNews Group)

Around the Area >> Spring-Ford’s next opponent will be Owen J. Roberts, and the 6-2 Wildcats regained some of their momentum after last week’s loss to Perkiomen Valley with a 35-14 win over Norristown. Avrey Grimm tightened his grip on the area’s rushing lead with 106 yards on the ground and three TDs. The stifling Wildcat defense shut out the Eagles over the first three quarters, holding Norristown to 85 yards of offense and forcing three turnovers. When the Wildcats travel to Spring-Ford, an outright second-place finish in the Liberty Division will be on the line.

That’s because Perkiomen Valley (6-2, 4-0 PAC Liberty) sealed the division title in its own dominant victory over Boyertown, 38-0. The Vikings’ defense got a well-deserved shutout to add to their list of 2021 accolades, while seniors Ethan Kohler and Dawson Debebe connected on scoring passes of 32, 36, and 48 yards, all before halftime. Ryan Klimek made the most of his three carries with scores of 22 and 41 yards, rounding out the scoring with a 31-yard field goal late in the second half. Boyertown was unable to take advantage of the two early PV turnovers forced by their defense.

Over in the Frontier, the Pottsgrove/Pope John Paul II title match is set for Saturday afternoon after convincing victories from both sides. Pottsgrove celebrated Senior Night with a 42-14 victory over Upper Perkiomen. Both Amir Brunson and Bryce Caffrey went over the 100-yard mark in rushing, while Caffrey extended the streak of special teams touchdowns to four straight games with a 67-yard punt return in the third quarter. Trenton Allen’s second quarter interception may have been the highlight of the night, however, as he carried a tackler about 25 yards after making the pick all the way to the 15-yard line, setting up Ryan Sisko’s TD pass to Riley Delp.

Logan Simmon had 98 yards receiving for Upper Perk, including an electrifying 75-yard catch-and-run off a shovel pass from Gorje Navarette.

They’ll meet the 6-2 (4-0 PAC Frontier) Golden Panthers, fresh off a 28-0 shutout of Pottstown. It’s the third shutout victory for PJP this year, as they limited Pottstown to 155 yards of total offense on the evening. Steele DePetrillo scored on both of his carries, while DJ Clarke was an efficient 9-for-11 through the air, finding Joe Pickell for a 60-yard score and hitting John Beach from six yards out for his second TD pass.

The winner of next week’s matchup will travel to Perkiomen Valley in two weeks for the PAC championship game, while the loser takes on the winner of OJR/Spring-Ford.

Phoenixville solidified its position as the area’s most improved team with a dominant second half in their 41-24 win at Upper Merion. Owen Koch’s 273-yard rushing night was highlighted by a 71-yard scamper after halftime that gave the Phantoms the lead for good. He added three more scores as the Phantoms (3-4, 2-2 PAC Frontier) pulled away in the fourth quarter, solidifying their chances to reach the District 1-5A playoffs for the first time since 2018.

Daniel Boone improved to 5-3 with a 35-0 win over Reading in a Berks County Section 1 contest. AJ Hofer ran for 140 yards and two scores while Blazers quarterback Dean Rotter completed six of his seven passes for 100 yards and three scores. Boone enters its toughest two-game stretch of the season now, with contests against powerhouse Governor Mifflin and Exeter Township on the horizon.