Plymouth Whitemarsh offense comes to life in win over Tennent 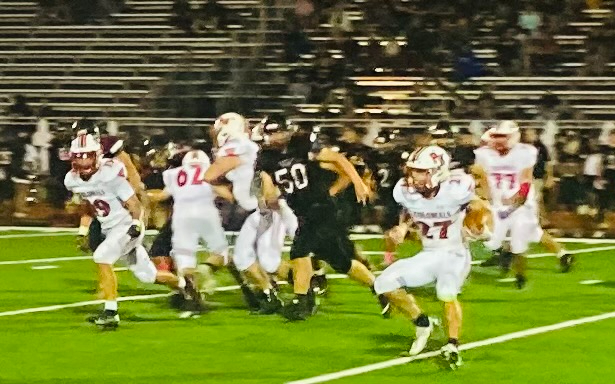 WARMINSTER >> As soon as Plymouth-Whitemarsh wide receiver Phil Taormina beat his man in single coverage down the right sideline, he knew what was coming.

“Aiden, I trust him,” Taormina said of Colonials quarterback Aiden O’Brien. “If I’m open, I know he’s gonna find me. Shout out to him because he throws the ball when he needs to throw it. And it’s a perfect ball.”

Taormina gathered in O’Brien’s perfect strike in stride, hauling in the 23-yard touchdown pass to put PW ahead 6-0 after a sluggish start Friday night. The Colonials would go on to two more scores in the first half, including another O’Brien-to-Taormina connection, and pulled away to a 35-14 victory over William Tennent in a Suburban One League American Conference contest.

“We didn’t play our best game. We had a lot of early mistakes. But we came out with the win so you can’t complain,” said Taormina, who caught three passes for 47 yards and a pair of scores.

A scary moment came in the second quarter, when the Panthers’ Stephen Cosenza was injured and taken off the field on a stretcher and rushed to the hospital by ambulance. The team got tremendous news later in the evening though, when they were told Cosenza had feeling and movement in all of his limbs.

The Colonials punted on their first series but then scored touchdowns on three straight possessions. After Taormina’s first score, Devon Orensky broke free, racing around the left side for a 37-yard touchdown, and with O’Brien’s two-point conversion run, it was 14-0 PW after one.

O’Brien hit Taormina on a 14-yard slant to the end zone, and Gregory Feinberg’s two-point run made it 22-0 Colonials at the break.

“I’m happy that we kind of pulled it together,” said PW coach Dan Chang. “I thought our guys played tough, and we told them all week that Tennent is a tough, physical team and we have to be ready to go. We didn’t get off to a great start but I was happy with how we rebounded.”

O’Brien rushed for 96 yards and a TD, and threw for 75 yards and two scores. Zion East had 45 yards rushing and a touchdown and PW’s defense had a shutout into the fourth quarter.

“(Tennent) was definitely intent on stopping our run game so we gotta be able to throw the ball too,” Chang said. “So I thought we did a pretty nice job protecting and delivering the football.”

PW coach Dan Chang talks to his team after its win over William Tennent on Friday, Oct. 15, 2021. Kev Hunter, MediaNews.

The Colonials padded their lead to 28-0 in the third quarter when East raced in from five yards out on a toss.

The Panthers got on the board with a 13-yard touchdown connection from Tim Lawson to Dan Patrick, and after O’Brien’s eight-yard TD, Tennent capped the scoring with the biggest play of the night by either squad, an 80-yard touchdown pass from Lawson to Liam Gibson.

“We have five sophomores starting on both sides of the ball. We know we’re gonna take our lumps this year,” Panthers coach Rich Clemens said. “Our guys are working, getting better. We have two games left, so we’re looking forward to next week.”