Wissahickon gets a head up on Abington with overtime win 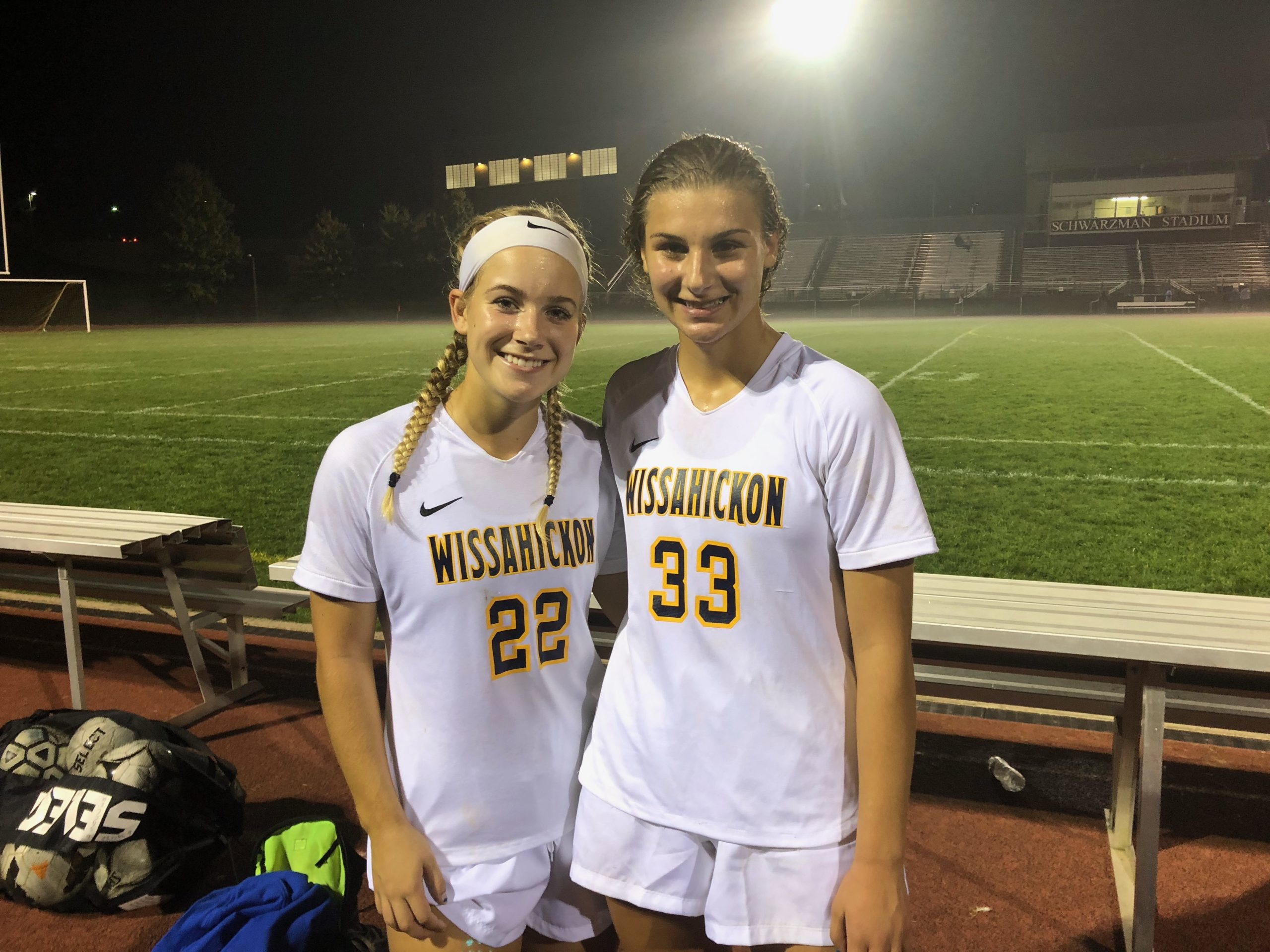 Wissahickon's Margaret Wilde (22) and Margo Kasenchar (33) linked up for the winning goal in their 3-2 overtime win at Abington on Wednesday, Oct. 13, 2021. (Andrew Robinson/For MediaNews Group)

The Wissahickon junior center back had logged every second of Wednesday’s intense and highly emotional SOL Liberty clash at Abington, doing much of it in the second half on an ankle that had taken the worst of a tackle attempt and with her defensive partner Serena Harris on the bench injured. Halfway into the first overtime, Kasenchar made the jog up the pitch and took up residence at the far post as on the other side of the field, Margaret Wilde lined up a corner kick aimed right in her direction.

Wilde hit it on the money as Kasenchar slipped inside her defender and headed home the winning goal as Wissahickon topped Abington 3-2 to go four points clear in the division table in a quality high school match.

“It’s been three years in the making, it’s the first year we’re actually able to do it, which is super-exciting,” Kasenchar said. “I just have to try and make my space and get to it and if it goes long, then I just have to send it back across.”

GIRLS SOCCER FINAL (OT): Wissahickon 3, Abington 2
Gorgeous corner by Margaret Wilde out of the fog finds Margo Kasenchar at the far post for the header winner with 4:04 left OT1 pic.twitter.com/Ao8ortUPLO

It took that long because Wilde, a senior bound for Pitt, wasn’t able to be on the field until this fall with a series of knee injuries robbing her of her first three high school seasons. Although it’s her first year on the pitch, Wilde wanted to win it just as badly as everyone else on the Trojans side, even imploring the bench to get loud before the start of overtime.

Wilde hadn’t quite been able to find the distance on a couple of whipped shots in regulation, but the corner kick was a perfect opportunity to zero in on her primary target.

“She’s my first look, 100 percent, all the time,” Wilde said. “Every time we get a corner, it goes to Margo Kasenchar and, I think, every time, I nail it. We work on hitting corners to Margo all the time so we’re lucky that in a game we needed to win the league, we got an opportunity and got it in the back of the net.”

The scoreline was the exact same as the team’s first meeting, which Wiss (12-2-1, 11-1-1 SOL Liberty) also won in overtime and no less dramatic. It was a tough result for Abington (11-4, 10-3-0 SOL Liberty), no less for the fact it put the Trojans four points clear in the table with just three matches left for each team.

Plus, it’s not like the Ghosts didn’t play well. Abington coach Rick Tompkins noted how dejected his team was once Kasenchar’s header went in but as a fan of the game, he appreciated the effort his side and Wissahickon both brought to the field under the stadium lights.

“We had chances in the first half we didn’t finish and they’re a good offensive team, there’s no doubt about it,” Tompkins said. “There’s not much I can say. I asked the girls ‘is there anybody here who didn’t give it their best shot?’ I didn’t see any hands. That’s all I can ask as a coach.”

Abington put most of the pressure on early and capitalized with 24 minutes left in the first half on a twin connection between Harper and Piper McGinley. Harper worked a defender on the right flank and played in a cross her sister was able to glance on frame off her head with the ball going in and the sisters racing toward each other to celebrate.

It proved to be a turning point in the early leg of the match as well, but not for the home side. Wissahickon responded with two goals in the next three minutes on two excellent finishes.

“How do we respond to them getting that rise of getting the first one? We score two in the next two-and-a-half minutes,” Wiss coach Chris McDaniels said. “Two fantastic goals as well.”

GIRLS SOCCER 21:31 1st half: Wissahickon 2, Abington 1
Sage Stelzer with the perfect touch on a long ball across the pitch, hitting in far post@PaPrepLive @SOLsports pic.twitter.com/4Gj8XaoaEK

Emma Baker and Kylie Friedman, who along with Wilde form Wiss’ power offensive trio, connected on the first with Baker playing a ball into Friedman inside the 18-yard box. Friedman, a junior, did the rest, nimbly taking a couple touches in traffic before blasting in the equalizer.

Baker played a role in the go-ahead tally as well, hitting a long ball across the field that glanced off an Abington player’s head and right into the path of right back Sage Stelzer. Stelzer, who has good touch and an attacking mindset on the flank, hit the ball in stride with a neat finish just inside the far post.

“We’re really lucky in that regard with our left fullback (Natalie Ryan) and right fullback (Stelzer), these are kids you want to encourage to get into the attack,” McDaniels said.

McDaniels felt the Ghosts’ grass field would help his team a little bit defensively. In the first game, Abington had success with through balls splitting the Trojans’ back line on Wissahickon’s turf but the ball would be slowed just enough on the natural surface to let his team make up for it.

GIRLS SOCCER 23:15 1st half: Wissahickon 1, Abington 1
Kylie Friedman levels it on a blast after Emma Baker gets the ball in across@PaPrepLive @SOLsports pic.twitter.com/IzEJWfcdld

However, it wouldn’t mean much if the Trojans couldn’t handle the Ghosts’ trio of Maura Day, Carley Slavin and Mei Mei Cheng.

“I think we match up pretty well with them. They’re certainly very strong in the center part of the midfield, their midfield three are an excellent combination of ball-winners but can also move the ball so we worked on trying to limit their time in possession,” McDaniels said. “I thought we had a pretty good set-up.”

The second half followed the first with Abington putting on a lot of pressure early but not getting anything from it. With so much at stake, not only in terms of the conference standings but District 1 playoff standing, the intensity ramped up.

Abington tied the game behind the McGinley twins again when Piper headed home her second with 11:27 left in regulation. Piper’s finish came off a touch after Harper’s shot was blocked and ruled to have deflected off a Wissahickon defender, keeping her sister onside. The ruling didn’t sit well with the Trojans bench, earning McDaniels a second yellow card.

Kasenchar credited her team for staying together even after Abington tied the game and Wilde added it was a measure of the growth the team has made since the start of preseason.

Wiss nearly won it earlier in overtime but Baker was denied by a great save from Alexis Ditri. A few minutes later, with the first wafts of the night fog rolling onto the field, Wilde found Kasenchar and it was just as scripted from there.

“This game was so important for us, we haven’t won the league (since 2012-13), so we knew to win this game and get above Abington, that’s all we were looking for,” Wilde said. “We knew we needed a result, so we came out ready and I thought we were stronger at the end of the game.”