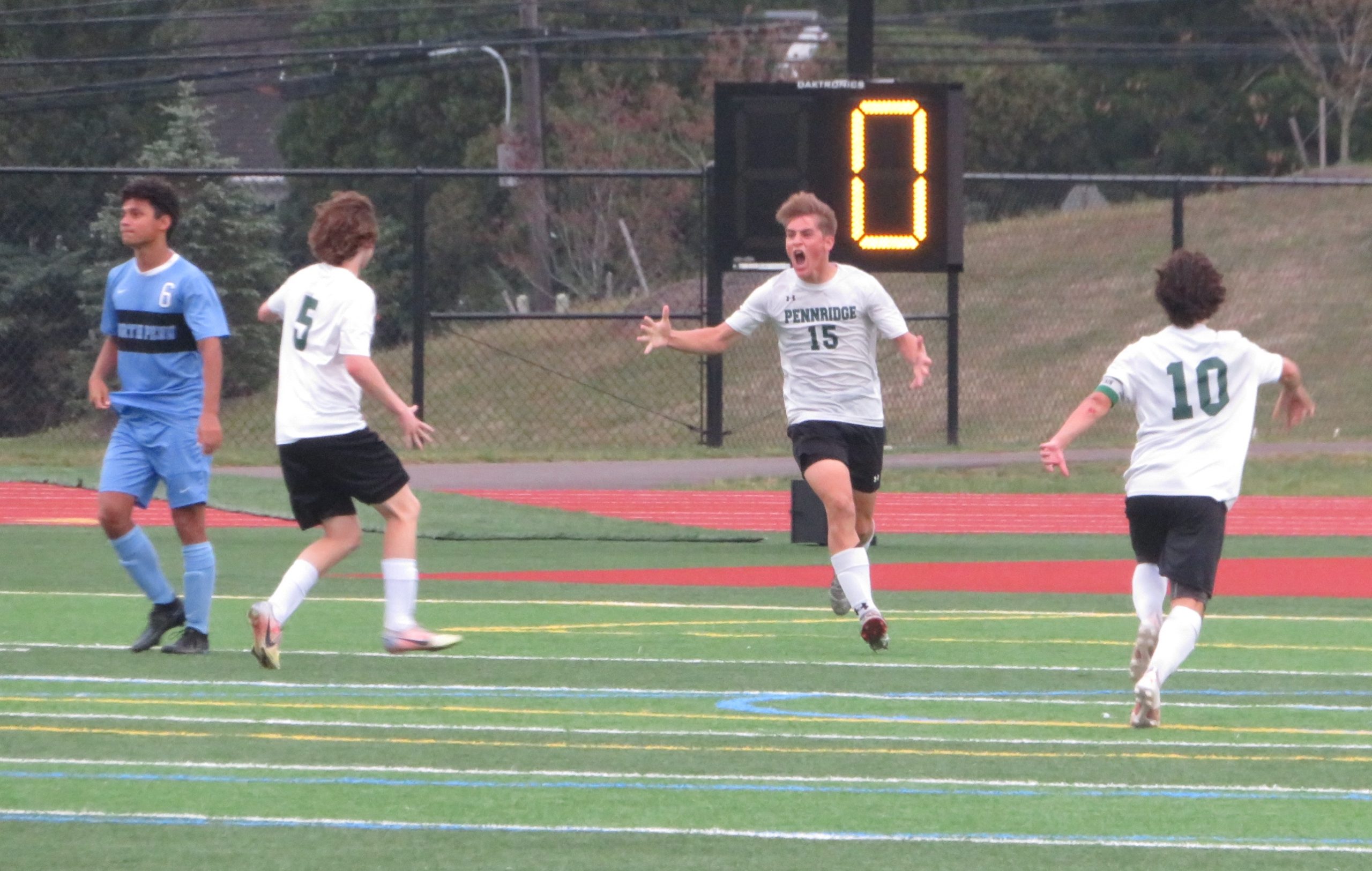 Pennridge's Jared Hess (15) celebrates after his goal in the second half of the Rams' 1-0 win over North Penn on Wednesday, Oct. 13, 2021. (Mike Cabrey/MediaNews Group)

TOWAMENCIN >> From his sideline vantage point in prior seasons, Jared Hess had his fill of seeing the Pennridge boys soccer team lose to North Penn.

“The past two years I’ve been on the bench watching the varsity play North Penn and it just angers me we couldn’t of gotten more goals and won previous years,” the Rams junior midfielder said.

The recent history between the Suburban One League Colonial Division sides has been one-sided in favor of the Knights but Wednesday afternoon, Hess found his moment to end the Rams’ long stretch of disappointment.

Hess lofted a shot over the goalkeeper and into the far right post to break a scoreless tie with 13:47 remaining in regulation and Pennridge held off North Penn’s late charge to leave Crawford Stadium with a 1-0 victory.

“It’s just so amazing that we could take the win today,” Hess said. “We played so hard, we played really physical even though they got a little chippy at the end and we just finished out the game and took the win.”

The win was the first for Pennridge (11-2-2, 9-2-2 division) over the Knights since 2015, putting an end to a 13-game losing streak that included two District 1 playoff defeats.

The result also puts the Rams atop the SOL Colonial standings, their 29 points two better than second-place North Penn (10-4-0, 9-3-0). The Knights, however, have four more division games to play while Pennridge has three left.

“It’s been a long time,” Rams coach Pete Valimont said. “(North Penn coach) Chris DePeppe’s got a great group there, doesn’t matter if they graduate Carter (Houlihan) or (Josh) Jones, they’ve got a great group of guys that work their butts off and hats off to him and his staff for having a fantastic team to play against.”

Both squads came into Tuesday on runs of good form so it was little surprise it was a close contest throughout. North Penn had won four straight and eight of their last nine while Pennridge picked up its third win in a row and now has victories in four of its past five.

“I think we had our opportunities, they had theirs,” Knights senior defender Ryan Mindick said. “It was just tough, they got one and that’s kind of how the way it goes sometimes.”

North Penn looks to bounce back Saturday when it visits Souderton for an 11:30 a.m. division matchup.

“Last couple games I feel like everything’s just been clicking,” Mindick said. “All the guys are starting to get the chemistry building and everything. Lot of goal-scoring opportunities between the last two games I think we’ve had nine over the last two so that’s been working well. A lot of guys stepping up defensively, kind of solidifying their position there as well.

Pennridge’s next game is also a road SOL Colonial contest as the Rams are at Central Bucks West 3:30 p.m. Friday.

“At the end of the day we can still screw this up,” Valimont said. “West is fantastic, (Central Bucks) South and Souderton are not going to be easy games whatsoever so as long as we do everything we can on our end, whatever happens, happens.”

The Rams’ goal came shortly after the Knights had a quality opportunity off a free kick – Nate Kim sending the restart into the box, Alex Stewart knocking the ball down to Jovani Gonzalez in space for a shot that ripped wide right of the net.

Less than a minute later, Hess struck to make it 1-0 in the visitors’ favor, getting free on the left side and with the goalkeeper out of the net, decided to let go on an effort that sailed inside the opposite right post in the 67th minute.

“It was out and Jeff (Stritzl) threw it to Shane (Velez) and Shane passed it back to Jeff and I saw a through ball and Jeff saw me perfectly and played the ball,” Hess said. “I just one-timed it, chipped the keeper.”

After watching his shot find the back of the net, two thoughts ran through Hess’ mind.

“Oh my gosh I just scored the game winner and we got to finish this out,’ the junior said.

Tensions boiled over in the physical contest just 32 seconds off the clock from Hess’ strike, the officials needing to halt play at 13:15 to settle things down. The end result was a yellow card to each side.

“Something was going to happen at some point here with where we’re at in the rankings and how tough these kids are and they know each other from club,” Valimont said. “Fortunately we were both able to get out of there with just a couple yellow cards and move on from it. But at the end of the day my guys are standing up for their guys so I’m proud of them for what they did and we’ll watch and learn from it.”

Mindick emphasized to the Knights they could not afford to lose their cool as they chased an equalizer.

“We were all sitting there, I kind of tried to calm everyone down,” he said. “Tell them keep their emotions low because that the last thing you want to have happen is a bad foul for a dumb reason.”

Pennridge’s Aiden Castle (10) waits for the ball to descend during the Rams’ game against North Penn on Wednesday, Oct. 13, 2021. (Mike Cabrey/MediaNews Group)

North Penn put the pressure on the Rams’ defense late but could not break through. A cross from Mindick bounced into the path of Gonzalez above the top of the box for a shot that one-hopped to Pennridge keeper CJ Dimmick. The Knights earned a corner in the final seconds but could not attempt it as time ran out.

“Bend and don’t break and try to get them if we can on a counter and take advantage of the chances we get,” Valimont said. “And Jared Hess, I literally pulled him on the side for a little bit and told him to have confidence in himself and step up cause he works so hard and for him to get that, I’m a proud coach. Great moment for him, it’s a great confidence for him, I’m so proud.”

In the first half, Gonzalez – who scored both goals in the Knights’ 2-1 win over Pennridge Sept. 14 – blasted a shot at the near left post that was saved by Dimmick. The Rams’ Ryan Saville tried curling a left-footed shot from outside the box towards the far left corner but NP keeper Gabe Kemp stopped it and smothered the rebound ahead of an incoming Tommy McKinney.

High Schools: Interboro wraps up Del Val field hockey title
Wissahickon gets a head up on Abington with overtime win