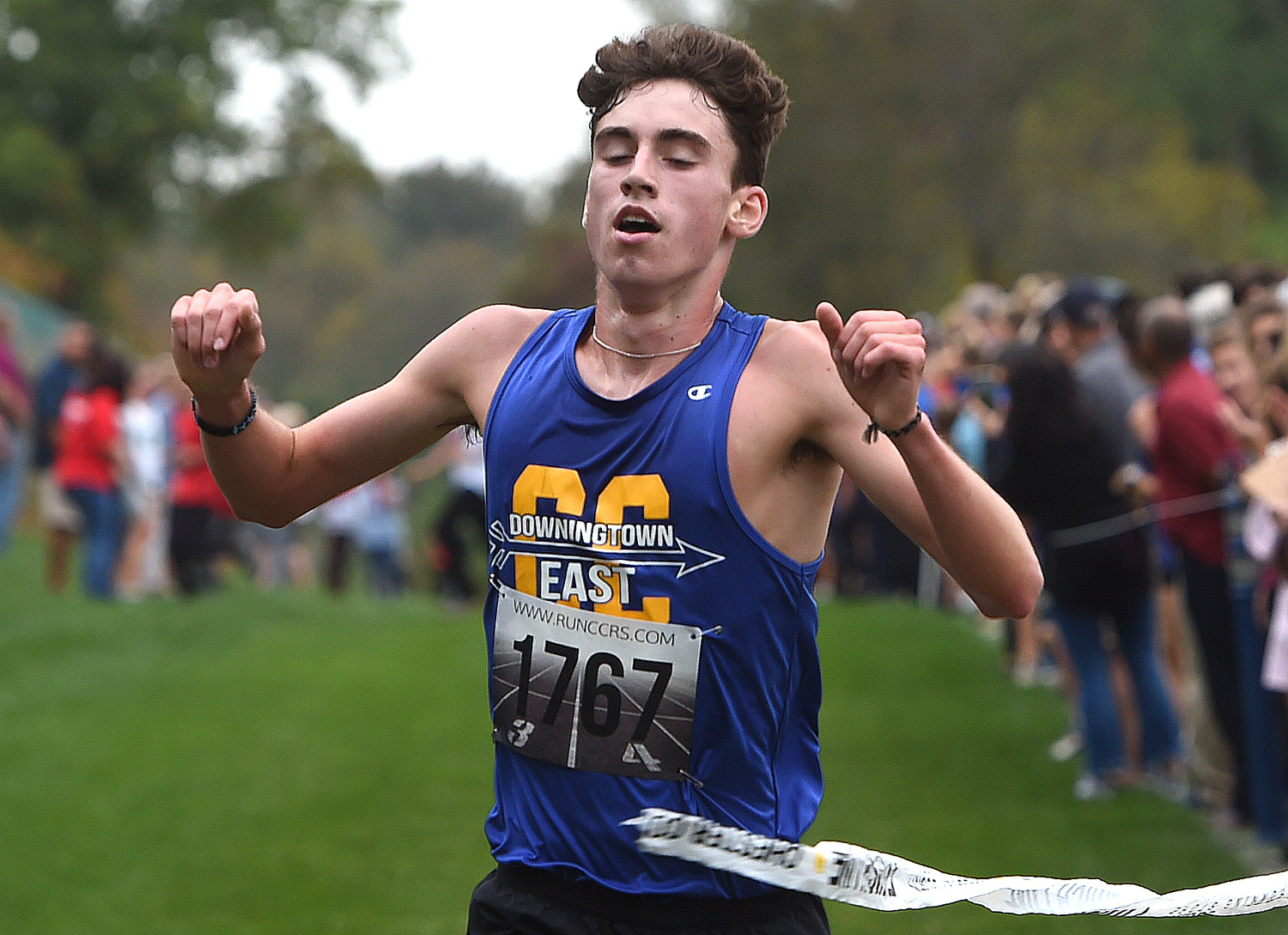 In the team competition, the Cougars finished first in the boys’ varsity race, and the Whippets were tops in the girls’ varsity race.

During much of the boys’ varsity race, the trio of Flynn, D-East senior Caiden Leen and Unionville junior Aryan Abbaraju hung together in a pack; then down the stretch Flynn put on a closing spurt to finish first. Last year, Flynn finished 10th at the Ches-Mont Championships.

“This is the first time I’ve ever run on this course; it was good, it was really flat,” said Flynn. “The plan was to go out in the front pack in the first mile and then try to up the effort. The original goal was to be in front enough so that we didn’t have to kick [it home]. I’m surprised that the kid from Unionville [Abbaraju] stayed up there for so long, because he wasn’t expected to. I was going to settle for second, save some for Districts [Oct. 29], but in the end, I wanted to win, and my coach gave me the OK to go ahead and kick it [down the stretch], so I kicked it home.”

“Last time I ran a 5K, I ran 16:36 at Penncrest, so this is a big PR for me,” said Abbaraju. “I came into this race seeded ninth. I started out fast, and was told that everyone was going out fast and burning out, but I wanted to try my best to get out fast and stay fast. I did get out-kicked at the end, but I’m still happy with the race. Since I’m a junior I really want to win this next year. The course was great, there weren’t too many hills, and it was overcast – no sun.”

Leen posted a clocking of 15:51.30 in finishing third. He placed 11th in last year’s Ches-Mont Championships.

“Our strategy was to sit behind the leaders and then slowly pick up the pace after that,” said Leen. “But the Unionville guy (Abbaraju] started out pretty hard, so we [Flynn and Leen] were battling hard with him the whole way. It was a good race, and the weather was good today for a race.”

At last year’s Ches-Mont boys’ varsity race, the top eight finishers were seniors; then the next three spots were earned by juniors (Flynn, Leen and West Chester Henderson’s Gavin Brophy, who placed ninth). Flynn, Leen and Brophy all finished in the top four this year – Brophy placed fourth with a clocking of 16:14.30.

In the varsity boys’ team competition, D-East was first with 33 points, followed by Avon Grove (90), Unionville (92) and Downingtown West (146).

“I’m incredibly proud of how our team did today,” said Downingtown East cross country coach Austin Tobelmann. “The Ches-Mont League historically has great athletes and coaches so we knew it wouldn’t be an easy victory. We were second the past two years and today we finally won our first Ches-Mont championship in program history. I couldn’t have asked for more.”

In the Ches-Mont girls’ varsity race, Tarpley won by more than 20 seconds ahead of the second-place finisher, clocking a PR 18:22.60. West Chester Rustin junior Ellie Keefer was the runner-up at 18:44.20. Downingtown East sophomore Madison Brown placed third with a time of 19:08.40. Last year, Tarpley finished sixth at Ches-Monts.

“I just wanted to go out with the girls in front today, and see what I could do,” said Tarpley. “We run this course a lot in practice, so it felt good to be on this course, it felt comfortable.  I felt confident out there today, I’ve had good training [recently]. I’ve been running with the boys lately, and they pushed me a lot (smiles).”

A flat course made for a fast run for Downingtown Carolyn Tarpley as she won the Ches-Mont Championship in a time of 18:22.6 at Downingtown West High School Wednesday afternoon. (PETE BANNAN – DAILY LOCAL)

For Keefer, Wednesday’s Ches-Mont championships was only the second race of her cross country career, although she is a proven distance runner, placing fifth at the PIAA state track championships last spring in the 3200-meter run. Her first cross country race was this fall at the Unionville Invitational, where she placed second.

“I just tried to keep up with the front pack today, and to give it all I’ve got,” said a smiling Keefer.

Brown, the third-place finisher was seventh last year at Ches-Monts.

“I was trying to stay with the top girls today, and pushing it on the straightaways,” said Brown, and smiled. “This was a good flat course.”

“Our girls drew a lot on the energy of the crowd and from each other to put together a fantastic team victory,” said D-West cross country head coach Scott Burns. “Led by Carolyn Tarpley’s impressive win and anchored by a stellar race from Aubrey Hufnagel, our team raced with confidence and determination and that’s exactly what’s needed in big races.”