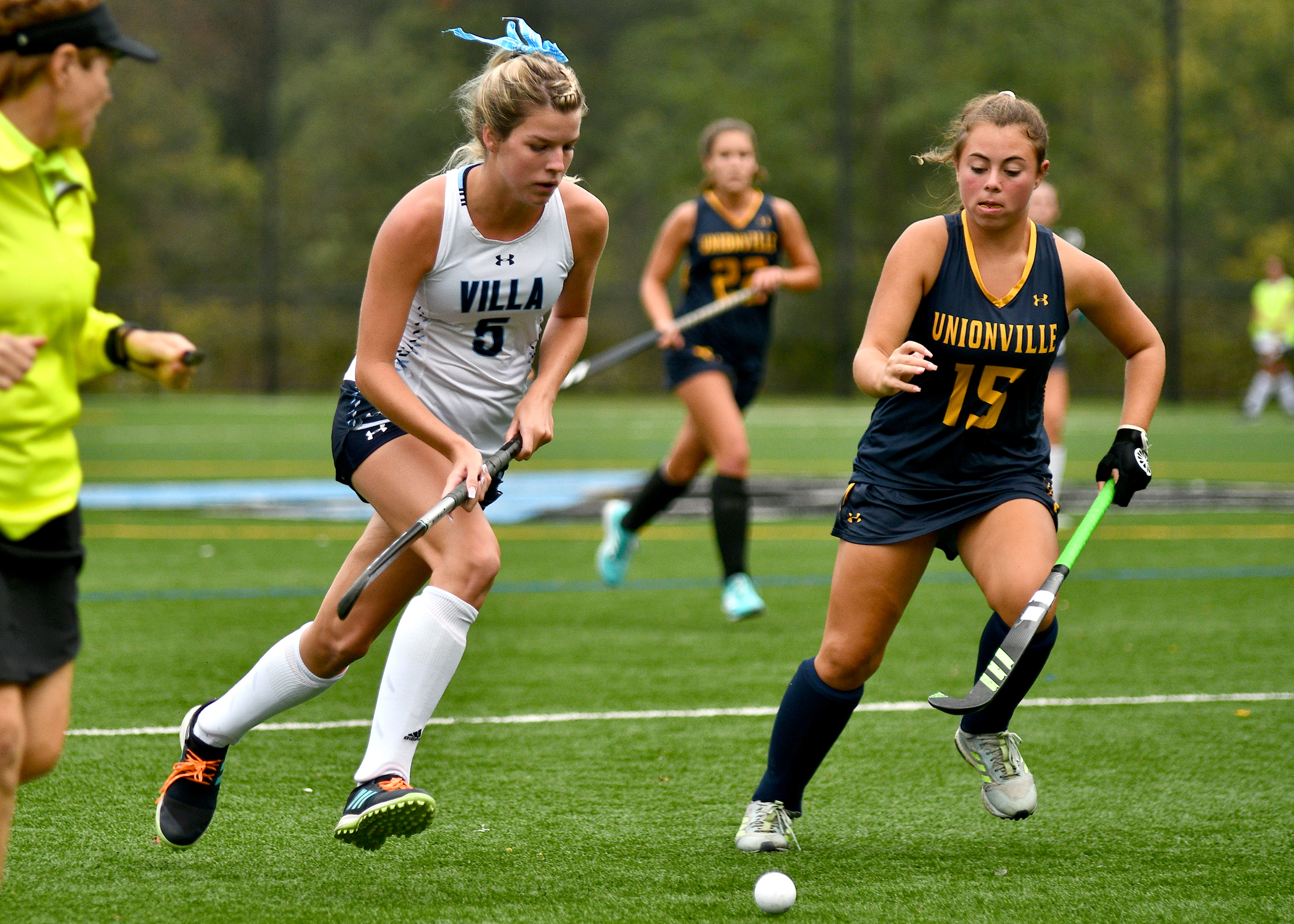 MALVERN—Prior to Tuesday’s field hockey game against Unionville, Villa Maria honored its large senior class, playing its final regular season home game. Those seniors went out with a bang. The Hurricanes (14-1-1) stormed out to a big early lead, and never looked back, cruising past the visiting Longhorns (8-4) with a 7-1 victory. All seven goals came from the senior class.

“Unionville always has a solid program, so we know we have to take them seriously,” said Villa coach Katie Evans. “I’m really proud of the way these girls played as a team. They way they move the ball and work together up and down the field, it just allows for more opportunities, especially on attack.”

Not three minutes into the game, Ryan Hickey, a Drexel-commit, got the Hurricanes on the board with an unassisted goal. Less than two minutes later, Lindsey Roberts found the back of the cage, also unassisted, to make it 2-0.

Awarded their second penalty corner of the game at the 7:32 mark, Annie Shaw made it count, taking a pass from Brynna Hill and slamming it home for the 3-0 lead.

“It’s always great to know you’re playing well and connecting the way you want,” said Shaw. “We’ve been working really hard on passing and connecting and basic team bonding. It means even more to play well today on senior day, one last chance to play together with all the seniors on the field.”

Not even 30-seconds into the second period, Roberts notched her second goal of the game, once again unassisted. Just like that, it was a 4-0 Hurricane lead.

“We’ve really been emphasizing scoring quickly and getting that early lead,” said Roberts, who will be playing in the BigTen next year for The Ohio State Buckeyes. “We want to be the ones setting the tone for how the rest of the game is going to be played. We know that with how well our defense has been playing, it’s going to take a lot to come back.”

Tuesday, that defense was nearly impenetrable. The Longhorns spent precious little time on their offensive half of the field, and even then, were not able to muster any serious pressure inside the circle. Unionville didn’t so much as force a penalty corner until there was just over three minutes left in the game.

“Our defense has been great,” said Evans. “They are very organized and disciplined, anchored by goalie Abbie Zarkowski and center back Maia Dechario. They’ve done a great job of setting organization and structure early. We’ve got a pair of very fit and very fast side backs who can run down balls. The combination of strength and speed gives us a really dynamic back unit.”

Villa’s remaining goals came on Shaw’s second of the day, along with scores from Clara Meehan and Gia Whalen. Meenan’s goal, coming on a penalty corner, was met with raucous cheering from her teammates. Meenan has missed much of her senior season due to an injury suffered during a lacrosse game last spring.

“I tore my quad last spring playing lacrosse,” said Meehan. “It’s taking a long time to rehab and heal, so I have basically missed my senior year of field hockey. It was great to get out and play one last game with these girls, and to actually score made it even more special.”

Unioinville’s goal came with just three minutes to play, when they converted the first and only penalty corner they were awarded, with Aly Iwasyk credited with the unassisted goal.

At 14-1-1, Villa sits atop the District 1, Class AA rankings, and can be forgiven if they are beginning to think towards a 16th District 1 title and beyond.

“We’re playing well,” said Evans. “But I am glad we still have a couple weeks left to work on some things. There are a few little things we need to tweak and sharpen in order to be our best when we’re at the point of the season where it’s win or go home.”