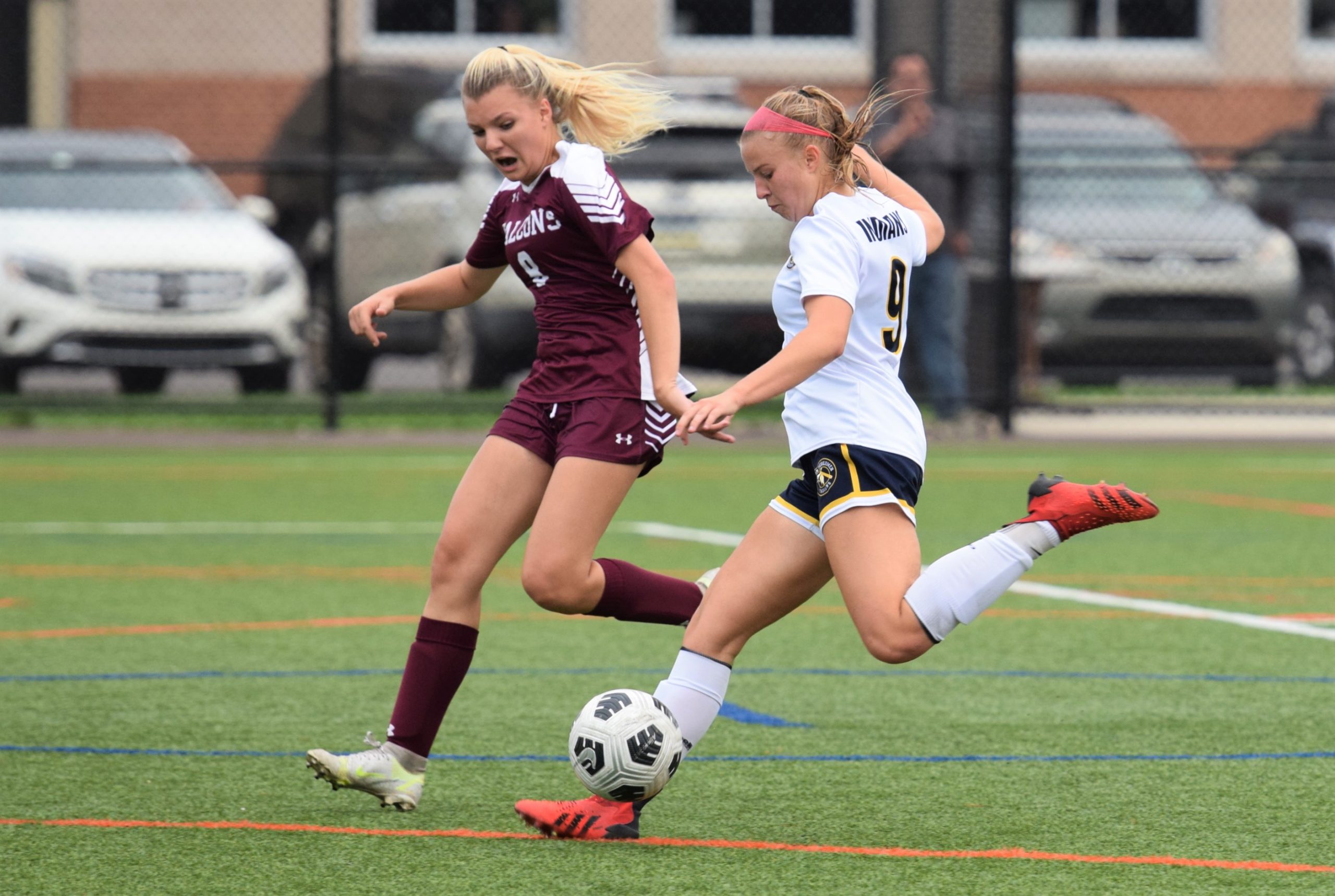 LOWER POTTSGROVE >> There have been more than a couple blowout victories for the Upper Perkiomen girls’ soccer team.

In the regular season’s home stretch and as the postseason nears, the close victories will be the ones that mean more.

It did Tuesday at Pottsgrove when the Tribe edged the host Falcons 1-0 to clinch the Pioneer Athletic Conference Frontier Division championship.

Sarah Fisher’s goal from a high-arching cross by Sara Edwards 10 minutes into the second half was the game’s lone score, a just reward for Upper Perk’s dominance in the first half that included two shots off the crossbar, from Edwards and Sam Kozminski.

After rolling Pottsgrove 4-0 on Sept. 17 in their first meeting, it was a tougher win to earn Tuesday.

“It was a little stressful. I think we could have played better, but we won and that’s really what matters,” Fisher said. “I think it’s good for team development and recognizing that some games are going present challenges.”

Pottsgrove managed to keep it close with credit to the Keleigh Nihart-led defense and top-notch goalkeeping of sophomore Ella Smith (11 saves), who saved a penalty kick by Edwards with three minutes left in regulation.

But Upper Perk’s junior goalie Gabby Neal (4 saves) earned her fourth straight clean sheet and has allowed just one goal in their last five. Neal is protected by the back four of Erin Edwards, Lindsay Beiler, Elizabeth Proctor and Elyse Kreiner. Proctor had a crucial block of an Avery Makoid shot from 6 yards out on a Pottsgrove corner kick in the final minute of the first half that was the Falcons’ best scoring chance.

PK save Ella Smith to keep Pottsgrove within 1-0 under 3 to play pic.twitter.com/wgub5DXwUp

Pottsgrove (7-2 PAC Frontier, 8-4 PAC) is 11-4-1 overall and ranked No. 7 in District 1-3A, likely locked into a place in the 10-team tournament. It’s a huge step forward from the 2020 season when the Falcons were overmatched in the 7-team pandemic-altered PAC and went 1-11. Senior midfielders Emily Vishio and Avery Makoid, junior Nihart and freshman forward Emma Gonzalez have been integral in the turnaround.

The two losses, although scant, left a big impression on Upper Perk, especially the 5-0 defeat to Owen J. Roberts (No. 2 in District 1-4A) on Sept. 30.

“I think a lot of us took it really hard. I personally took it extremely hard,” said Neal. “I never had five goals scored on me like that situation. I think it all hit us because we were used to coming out and crushing teams. To get crushed 5-0 hurt. But I think we’ve responded well and we’re ready to keep going.”

Beyond that blip, Upper Perk has been a powerhouse, scoring 82 goals against 10 allowed.

“I think a lot of us have played together for a lot of our lives and that chemistry is showing on the field,” Fisher said.

They know the games the rest of the way will more likely resemble Tuesday than the 13 wins of three goals or more, which is just fine for Upper Perk’s aspirations.