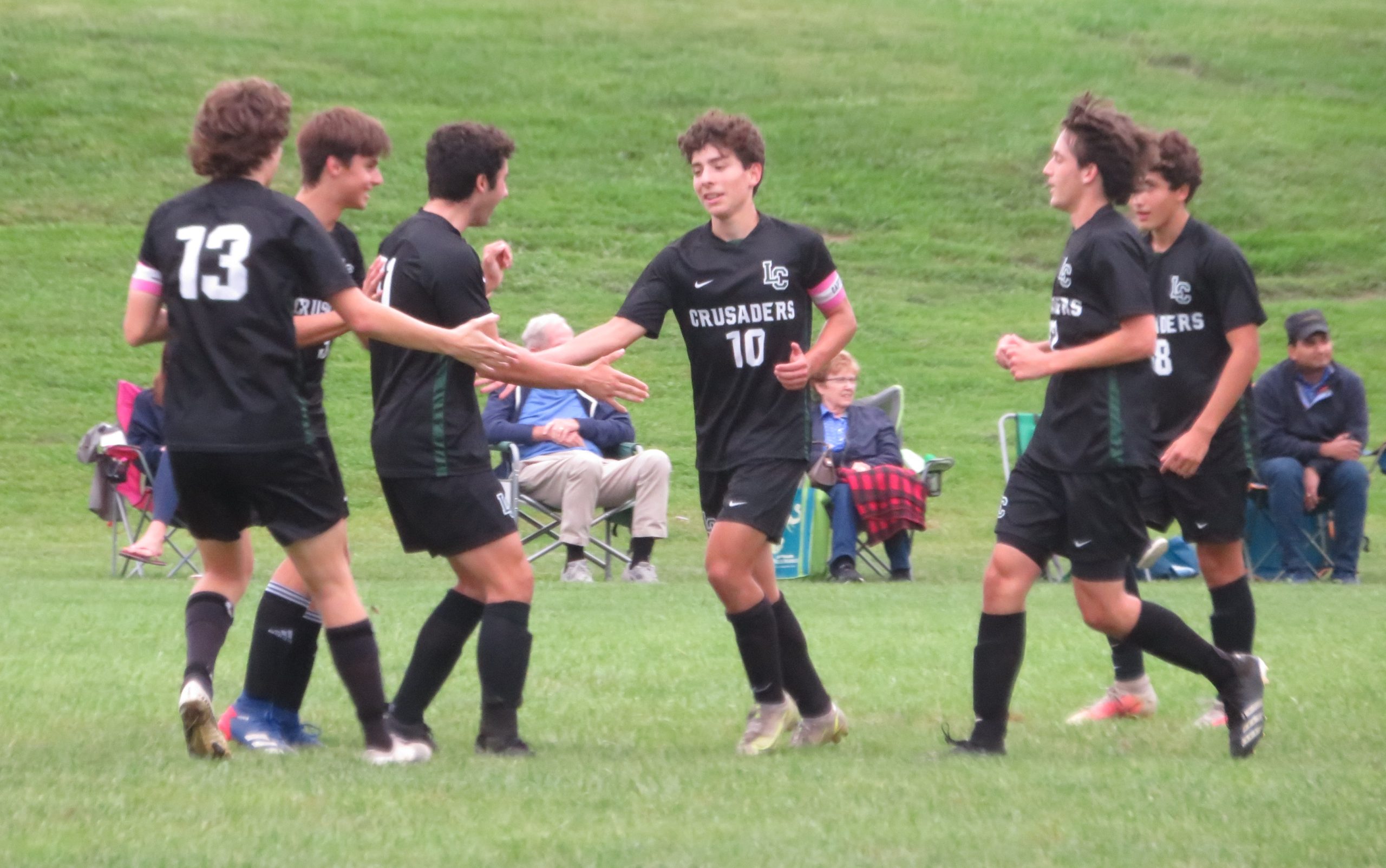 Fernandez found the back of the net three times before halftime against Devon Prep Tuesday afternoon, the hat trick sending the Crusaders to a Philadelphia Catholic victory as they shut out the visiting Tide 3-0.

“I knew I was going to play pretty decently against Devon,” Fernandez said. “Because we’ve been preparing for this game for quite a while.”

Needing a win to stay in the race for the league’s spot in the District 12 Class AA final, Fernandez provided LC with all the offense it needed with his hustle and touch as the Crusaders (6-9-1, 4-6-0 PCL) continue their run of solid play and are now unbeaten in their last three.

“He’s always had the skill, he’s always had the determination to score, now he’s kind of solidified,” said Lansdale Catholic coach Casey Farrell of Fernandez. “He’s rounded out his game to the point where he’s always around the ball no matter where the ball is in the field. That’s what goal scorers do.”

Devon Prep topped LC 1-0 in their meeting last season to help the Tide secure a berth in the PIAA Tournament and ended the Crusaders’ run of state appearances at seven.

In avenging that loss Tuesday, Lansdale Catholic moved into a three-way with the Tide and fellow 2A side Conwell-Egan for seventh in the PCL standings – each sitting at 4-6-0 for 14 points with one league regular-season game remaining.

“A lot of us that played last year here were really sad about that and came back as hard as we can to beat them,” Fernandez said. “Make sure it doesn’t happen again.”

“It took us a little longer than we wanted to to get that first goal but we know if we score first it kind of changes our whole attitude,” Farrell said. “It kind of gives us confidence – we can kind of settle down a little bit.

“The nerves were there, they beat us last year to send themselves to states so there’s a whole sort of revenge situation, Senior Day, a lot of stuff  was riding on today so they took care of business. I’m proud of them, happy for them.”

“Beating La Salle did give our team a lot of confidence and allowed us to pretty much win this game too,” Fernandez said. “Because before we were kind of struggling early in the season with chemistry and positioning and everything but we figured it out and it’s working now.

LC played Dock Mennonite to a 1-1 draw last Saturday then earned a second straight league victory with its shutout of Devon Prep.

“Honestly it’s not necessarily that anything clicked, it was more just every single game we would lose one kid, one kid would come back, two more would go down and we couldn’t find any consistency,” Farrell said. “But we always knew we had the skill it was just I think we used that as a crutch, like ‘Oh we’re hurt we’re going to play this game poorly,’ when I think we kind of realized that’s not an excuse, we have plenty of skill behind the guys who are hurt, it’s more about who wants it more and I think these guys want it badly.”

Fernandez gave the Crusaders up 1-0 after putting pressure on the Tide backfield and blocking a clearance. He got to the loose ball and drove towards goal and struck for the opening tally.

“Someone played it through but it was too close to the defender but I jumped in front of it and kind of deflected it in my favor,” Fernandez said.

Fernandez doubled the lead as he chased down a long ball sent by LC goalie Danny Shelak then chipped it over the Tide keeper.

“Our keeper has a pretty long punt so I knew it was going to go over the defense,” Fernandez said. “So I just ran onto it and I got it.”

Fernandez finished off his hat trick and made it a 3-0 lead by ripping a shot past the diving Tide netminder and into the lower left corner of the goal.

“I stole it from one of the defenders and then shot it, bottom left post,” he said.

Fernandez and Lansdale Catholic could not get a fourth after the break but their first-half output was more than enough. Devon Prep knocked a shot off the crossbar in the second half but the Crusaders held on to post their fourth shutout of the season.

“Three is not a big lead but at a certain point, 20 minutes in it’s still 3-0, I’m feeling great about our defense,” Farrell said. “They’re not threatening as much as I thought they would be threatening so it’s nice to get some guys in, leave the seniors in there as long as I possibly could. Just walk away with the win is the most important thing, doesn’t matter what the score is.”