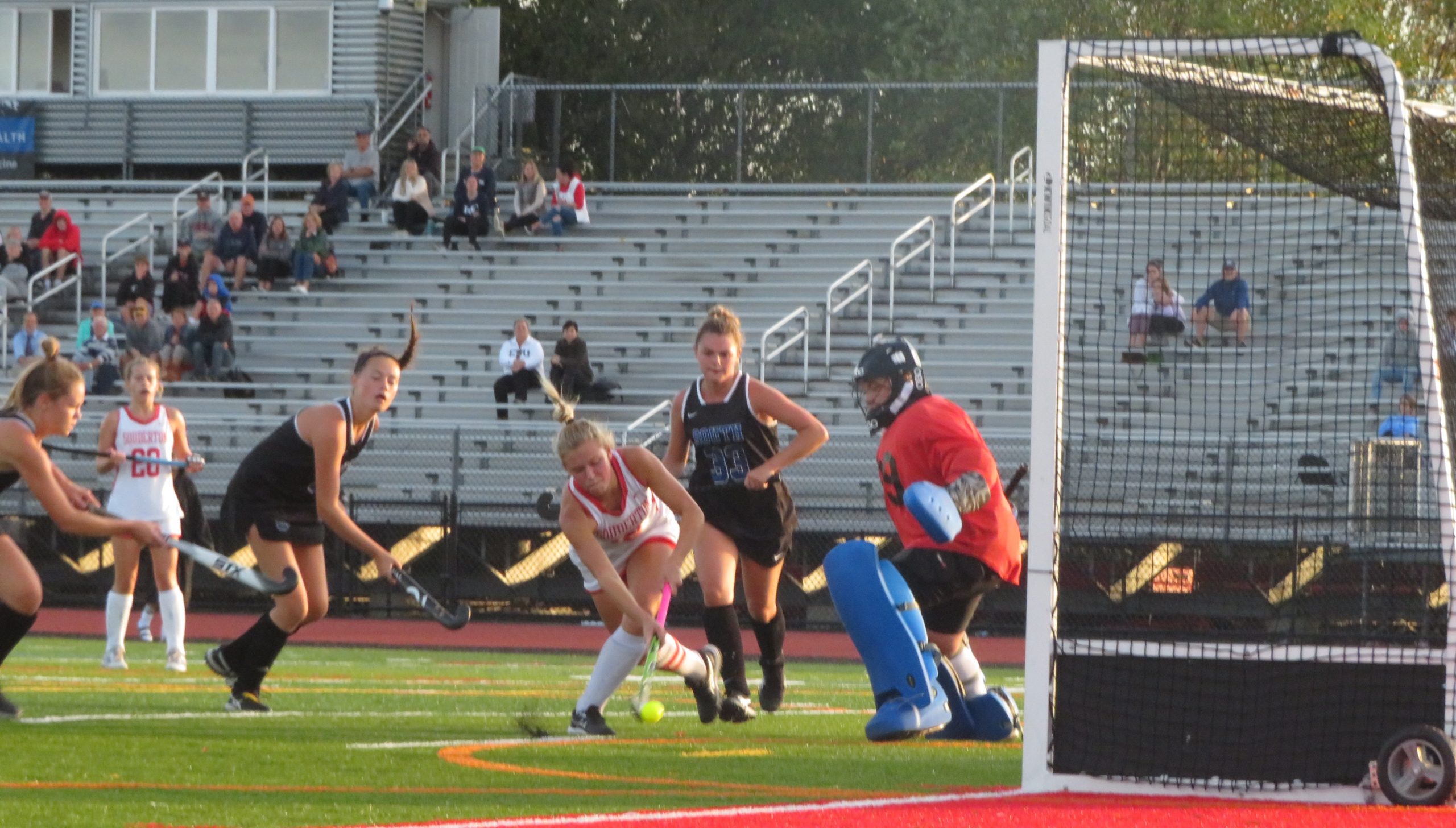 Souderton's Reily Knize sends a shot into the cage for a goal in the third quarter against Central Bucks South on Monday, Oct. 11, 2021 (Mike Cabrey/MediaNews Group)

FRANCONIA >> The Souderton field hockey team had done just about everything Monday night right except put a ball into the back of the cage.

And that was a bit of an issue due to visiting Central Bucks South scoring early in the second quarter to take a 1-0 lead into halftime of their SOL Colonial Division matchup.

Knize finally did that for Souderton, collecting the equalizer in the third and from there Big Red finally found success on penalties corners – converting three times with Lauren Frye a factor in each as the Indians rallied to beat the Titans 4-1 for their 11th straight win.

“We just couldn’t punch it in the first half,” Souderton coach Sue Casciato said. “So, I’m glad we stayed strong and didn’t get down cause we haven’t given up a goal in a while so that could of taken the wind out of our sails a little bit but I think they knew we were playing pretty well.”

Ava Jones recorded the go-ahead goal with 2:40 left in the third, knocking in a shot off a ball played in by Frye from the right side of the circle.

The Indians (12-1-0, 11-0-0 division) pulled away with two goals in the fourth – both seeing Lauren Kenah getting a touch on balls delivered by Frye.

“I think the cross ball really works for us,” Frye said. “Because they’re expecting it on goal and they all just kind of watch it go across and they’re all like frantic when it gets to our post player.”

FIELD HOCKEY: 2:40 3Q Souderton 2, CB South 1. Ava Jones gives Souderton the lead on a corner, knocking in it at the left post off a ball played by Lauren Frye. pic.twitter.com/2Ms7Zpobgd

Monday’s game was the start of a crucial week for Souderton as it tries to stay atop both the SOL Colonial standings and the District 1-3A power rankings. The Indians visit Central Bucks East 3:30 p.m. Wednesday then host North Penn 5 p.m. Friday.

Entering Tuesday, North Penn was ninth in District 1-3A while East was 12th with the Knights and Patriots tied for second in the division at 27 points with Souderton first with 33.

“We’ve been talking about it’s a very big week we got to really keep our heads – heads in the game, heads strong, really push for the wins because we want to stay first in our district,” Frye said.

Souderton was denied twice on first-half penalty corners by defensive saves by South with the Titans grabbing the lead as Erin Smith scored off a ball sent into the circle by Julia Cooper with 5:01 left before the break.

The goal snapped the Indians’ shutout streak at seven games, Souderton having not allowed a goal since its 4-3 win over North Penn Sept. 17.

“We just couldn’t punch it in the first half,” Casciato said. “So, I’m glad we stayed strong and didn’t get down cause we haven’t given up a goal in a while so that could of taken the wind out of our sails a little bit but I think they knew we were playing pretty well.”

Knize put Big Red on level terms at 5:01 in the third, slotting a shot into the cage after Ang Borisow put a ball into the circle.

“We practice in practice Ang hitting from like the 25 and hitting it in and trying to get touches on it,” said Knize, who has committed Bloomsburg to play lacrosse.” So I was kind of watching where she was aiming the ball towards and I was trying to place myself where she was going. And then thinking Coach Sue always tells me to spin strong so I spun strong and just hit it in.”

FIELD HOCKEY: 6:23 4Q Souderton 4, CB South 1. Souderton converts on a corner off a ball send towards the cage by Lauren Frye. Lauren Kenah was credited with the goal. pic.twitter.com/MNW8usorME

The Indians went up 2-1 less than three minutes later, Frye taking the insertion pass from Borisow and skipping a ball towards the far left post that found Jones for a shot that flew into the cage at 2:40.

“I’m trying to hit it far post and then our post is there or our pads will hit it but sometimes it doesn’t go as played,” Frye said. “But I think today our post players were really ready for it.

Another corner tally gave Souderton a 3-1 advantage in the fourth, as Kenah got a touch on a Frye shot and the ball bounced into the cage’s left corner at 9:38.

“The first half we actually hit the ball better probably,” Casciato said. “Sometimes it’s like you said it’s law of averages and sometimes when you mishit the ball it’s actually harder for the goalie to clear it cause if you hit it nice and hard all they have to do is block it and it goes all the way out of the circle like you miss-strike the ball then they have to do more with it.”

Central Bucks South celebrates after a goal by Erin Smith (20) in the second quarter of the Titans’ game against Souderton on Monday, Oct. 11, 2021. (Mike Cabrey/MediaNews Group)

Indians goalkeeper Tegan Farina preserved the two-goal lead with a diving save on a corner to stop a Cooper shot from the top of the circle.

Big Red struck once more on a corner to make it 4-1 as Kenah, a Virginia commit, got a stick on a Frye shot and the ball found its way in with 6:23 left.

“Lauren Kenah’s very good at keeping her eye on the ball and getting the touches on,” Frye said. “And the posts were there, the posts didn’t swing which is really good cause we’ve been working on that as a team, not swinging at the ball cause we’ve had a lot of opportunities in previous games and we’ve swung at the ball.

Knize was close to scoring Monday’s opening goal on a first-quarter corner as her shot got past the keeper and dribbled toward the goal line only for it to be knocked away by Anna Shirley.

On a corner in the second quarter, Kenah’s shot hit the far left post. Jones collected the rebound in front but her shot was denied by Cooper’s defensive save.