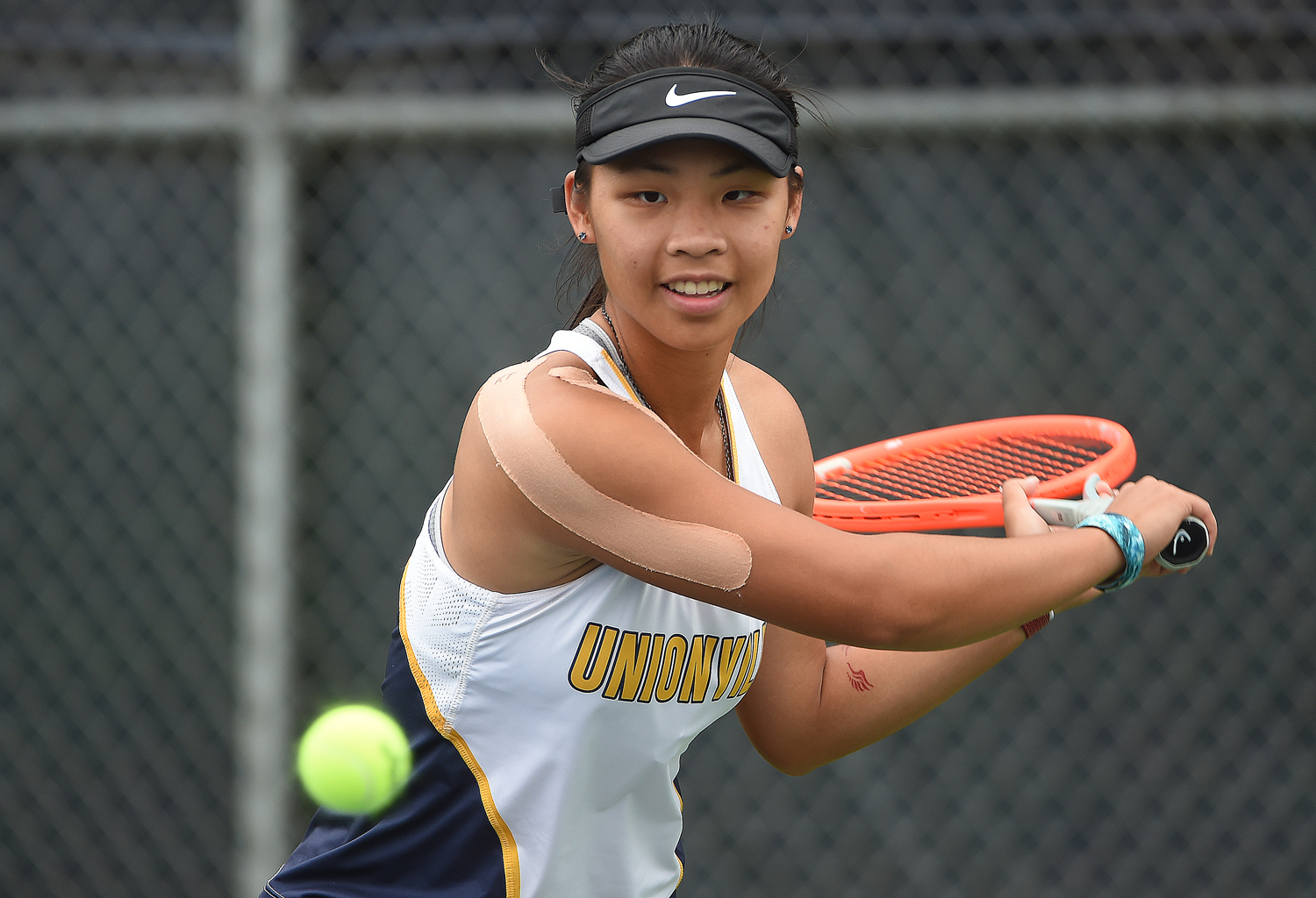 EAST MARLBOROUGH >> Even without its number one singles player Grace Li, the Unionville girls tennis team was not expected to be pushed by No. 16 Academy Park as the District 1 3A team tournament started Monday. That proved the case as the Longhorns did not drop a game in the matches that were played, and went on to a 4-1 first-round victory on an overcast afternoon.

The Longhorns remained unbeaten at 15-0 as they move into the second round and will host No. 8 Great Valley, a 3-2 winner over Harriton. That match will begin at 2:45 p.m. today.

Li, the Ches-Mont League American Division singles champion and second-place finisher at district singles, was in the doubles final in a tournament in South Carolina that wrapped up Monday. Per district rules, Unionville was unable to substitute and had to default, giving the victory to Academy Park’s Shanlya Robinson.

Meera Sehgal put Unionville on the board against Chanel Geohaghan. The left-hander controlled the match throughout and ended it when Geohaghan’s backhand service return went wide and Sehgal won, 6-0, 6-0.

“It is a bit of pressure (being the top seed) because there are a lot of good teams out there and they’re close together,” said Sehgal. “We’re just trying to have fun because we play better we have fun. We’ll be good for tomorrow.”

At first doubles, Faith Ilgner and Jaclyn Santiguida won 6-0, 6-0 over Isi Osagie and Sanaa Rogers, in a match that was the last to finish after Osagie received treatment after tweaking her back. Osagie would come back and resume the match.

The Knights may have been knocked out of the tournament, but they appreciated and enjoyed the opportunity to be it.

“It’s something that I’ll always remember,” said Geohaghan. “I appreciated the chance to play a good team like them and learn and even just talking to my opponent after the match, I learned a lot.”

“We had a fun season,” said Robinson. “It was a little frustrating with the rainouts and postponements, but we had a great season and it was was great being in the districts.”

Unionville moves to a perfect 15-0 and even though they are unbeaten and the top seed, coach Janet Johnston feels that the tournament is up for grabs.

“It’s always good to get the first one in,” she said. “There are a number of teams in the district capable of winning it, so there should be good matches the rest of the way out.”

The Longhorns won the districts in 2019 and look to improve on last year’s result when they were ousted by Spring-Ford in the second round.

“Our girls are really excited and they are definitely up for the challenge,” Johnston added. “They’re ready to take it on and they believe they’re capable of winning the whole thing.”