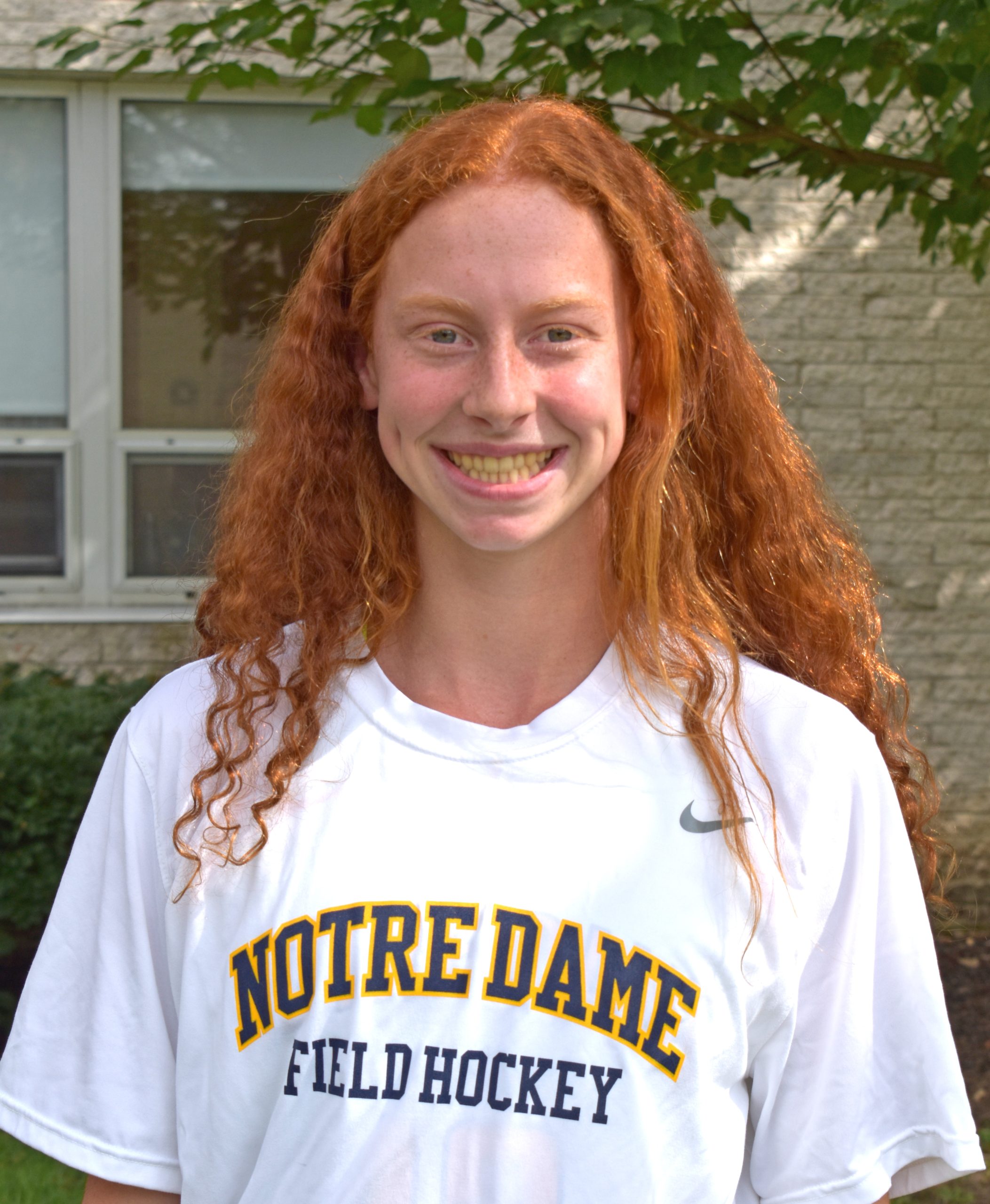 Q: You mostly played midfield in middle school, but moved to forward as a freshman. What were the biggest challenges you faced in moving to the forward position?

A: The biggest challenges I faced in moving to forward were where to position myself, getting used to making a lot of fast cuts, and working together with the midfielders. It took me a little while to get used to staying up the field, but now that I understand where I should be in relation to the ball, I am able to move across the width of the field to either make space for my teammates or get the ball. I really like the amount of freedom that I have as a forward with the ball and ability to take part in fast breaks. Coach Williams has helped me to become a high-scoring forward by giving me the opportunity to play a large role in my team’s offense. She allows me to do what I want with the ball and always makes sure I am in the right positions. Without her guidance, I probably would not be the same player I am today!

Q: Last August, your hurt your ankle and were not cleared to play until about a month later. What did you work on while you were injured, and what aspect of your game did you work on most during the rest of the summer? What are you hoping to achieve this fall?

A: I was able to take the time when I was injured to hone in on strengthening my wrists, improving my stick skills, and practicing shooting. Before that, I was working a lot on my speed with the ball and circle play in game situations. This fall, I hope to improve my shooting abilities even more and work on cutting to the ball. I hope to come out of this fall season a much better player than I went into it.

A: I give a lot of credit to my teammates in my scoring success. Everyone works so hard to get the ball up the field to me, and when I am given scoring opportunities, I try to take as many as I can get. My team’s midfielders and forwards do a great job of seeing the field, and they can give me passes with high chances of scoring. Playing forward is new to me since I started at Notre Dame, so I credit my coach, Adele Williams, with making me into the high-scoring forward I am today. I also think that my speed with the ball has helped me to create so many goals for my team.

Q: In the season opener, against Cardinal O’Hara, you scored 4 goals in a 2 minute period. What is your sharpest/favorite memory of that scoring spurt?

A: My fondest memory of my scoring spurt from our game against Cardinal O’Hara was when I got the ball around the 50-yard line from my teammate, Aly Maguire. I had just scored my first goal in the game from a shot around the top of the circle, and as soon as the ball got to my stick from Aly, I looked up, only saw the goalie, and knew that I would have another goal. This second goal gave my whole team a lot more momentum and gave me a lot of confidence, enough to get two more goals in that two-minute span of time. Our season opener has set the tone for the entirety of our season, and I am proud to have proved myself right at the beginning.

Q: What originally sparked your interest in field hockey?

A: My interest in field hockey was originally sparked by my Mom. She played both field hockey and lacrosse at Georgetown University, so she signed me up for many clinics at a young age. Although I have played many other sports, I have always been drawn to field hockey because of the speed of the game and the way I feel when playing.

Q: Who have been your biggest field hockey mentors, and what was the most important thing you learned from each one?

A: My biggest field hockey mentors have been my parents, coach Adele Williams, Jun and Richard Kentwell, Guy Cathro, and Jaja Kentwell. My parents inspire me and I have learned so much from them. I am beyond thankful for everything they have sacrificed for me. From my Notre Dame coach, Coach Williams, I have learned to always give 110 percent effort and be a leader. My WC Eagles coaches, Jun and Richard Kentwell, Guy Cathro, and Jaja Kentwell, have helped me to develop so much as a player by greatly improving my stick skills, vision, and overall tactical understanding of the game. Because of all these people, I have learned many important lessons about life and field hockey.

A: On the day of a game, I eat a bagel at our team breakfast and for lunch, I have a peanut-butter and jelly sandwich, an apple, and a protein bar. Throughout the course of the day, I stay hydrated by drinking lots of water. With our games after school, I try to focus and concentrate on my schoolwork during the school day, and when it gets closer to game time, I focus on my warm up and like to listen to music. Right before the game, I drink an orange Gatorade and eat some energy chews.

Q: You wear uniform jersey No. 13 – why did you pick this number?

A: I picked this number because my birthday is on the thirteenth, and although many people associate 13 with being an unlucky number, I think it is lucky – and I have been wearing it ever since I was young.

Q: What is your favorite course at Academy of Notre Dame? What do you think you might want to major in at college?

A: My favorite course at the Academy of Notre Dame is physics or math. I have great teachers in both of these subjects, and I really enjoy every part of these classes. In college, I would like to major in engineering or medicine.

Person I most admire, and why: “The person who I admire most right now is Austin Beltrante. The fight that he is giving every day inspires me and should inspire others. The progress he has made is incredible and from him, there are many lessons I have learned and applied to my life.”