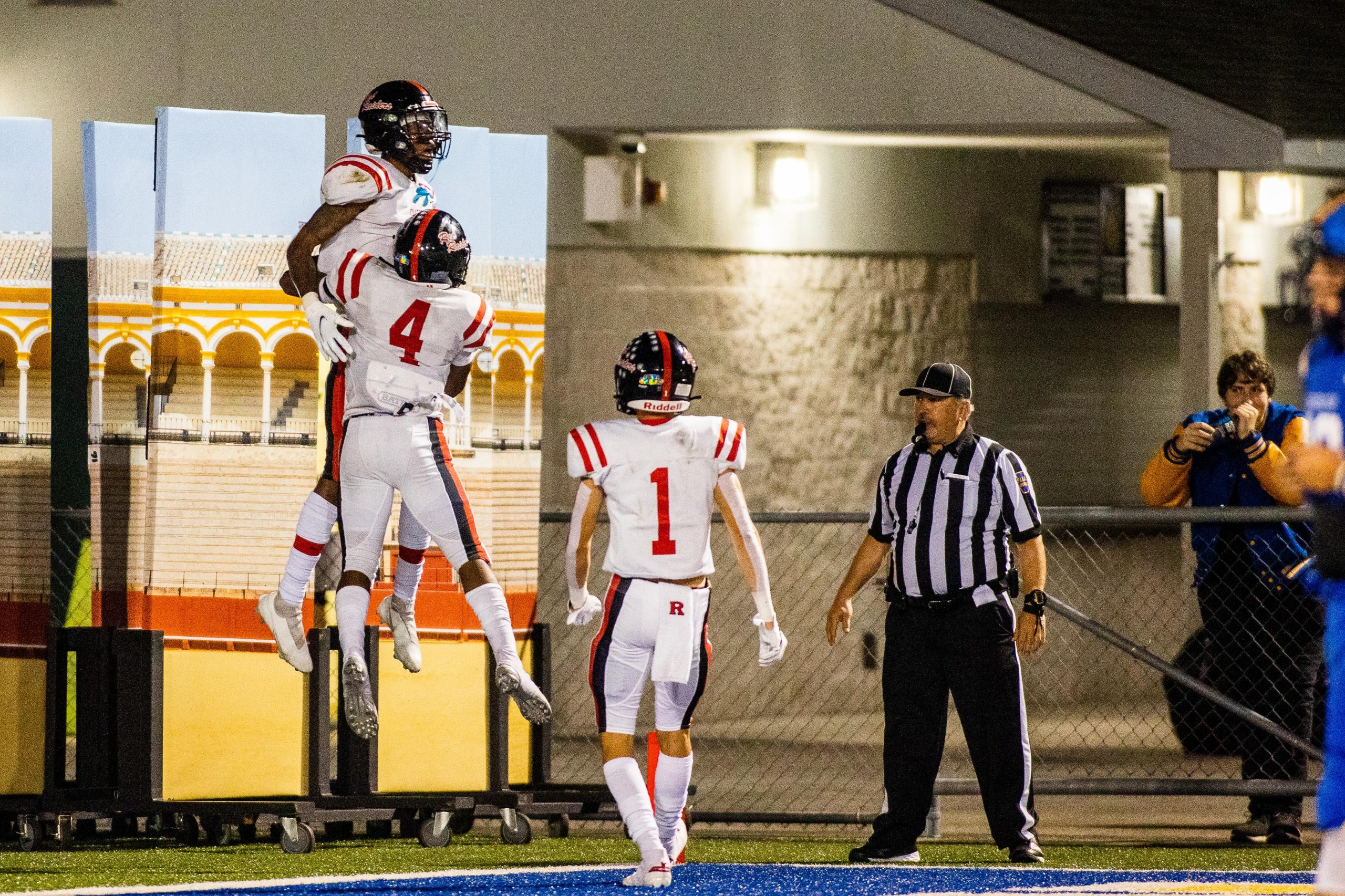 In the same away corner of the end zone, on a nearly-identical play as Ortega to Bryant’s game-winner against Downingtown East in 2017, Susi found Taylor for a 19-yard touchdown with 13 seconds left to push Coatesville past Downingtown West in heroic fashion.

The Red Raiders scored twice in the final three minutes, three seconds of the game to stun the Whippets, 31-28, in a Ches-Mont National Division dandy at Kottmeyer Stadium.

“This is the best feeling I’ve had in a win in a long time, probably ever,” Susi said. “Downingtown is a huge rivalry and I respect all their players. They have a great team.”

Coatesville’s James Taylor awaits the ball in what would be a 19-yard, game-winning touchdown with 13 seconds to go. (Nate Heckenberger – For MediaNews Group)

The Whippets (0-1 division, 3-4 overall) took a 28-18 lead when Evan Wickersham ran an option play nine yards for his second touchdown of the game, with four minutes, 43 seconds to go.

Coatesville (2-0, 6-1) took over at its own 35 and picked up a quick 26 yards on two catches by Taylor. Four plays later, Susi found Tommy Ortega for a 12-yard score, but despite matching the Whippets’ TD total, the Red Raiders trailed by four after a fourth failed PAT.

With two timeouts remaining, Coatesville tried an onsides kick, to no avail. West took over at its own 44, but after going backwards on its first two plays, an incompletion on third down saved Coatesville its last timeout.

Susi went right back to work, running for 22 yards on the first two plays and then converting a third-and-seven with a pass to Dowayne Molina. After a nine-yard loss on second down, Coatesville called the perfect play, setting up a screen pass to RJ Rickabaugh, which netted 26 yards to the West 19.

After a spike, Susi fired to the back corner of the end zone, where Taylor ran under and caught the game-winner with 13 seconds left.

“We liked the matchup there,” Coatesville coach Matt Ortega said. “(Taylor) has a tall, athletic build and we wanted to take a shot, one-on-one. We made the play we needed to make.”

Coatesville’s Dowayne Molina runs in for a six-yard touchdown in the third quarter. (Nate Heckenberger – For MediaNews Group)

Taylor entered the game with just one reception for 21 yards on the season, which came in the season opener.

“James has been struggling all year, but he trusted the process and had that ‘Ville mentality,” Susi said.

Of the 59 combined points scored, just six were tallied in the first half. Susi, who led all rushers with 154 yards, reached the end zone on Coatesville’s second drive.

West took its first lead the first play of the third quarter when John Mulville raced 87 yards on the kickoff. The two teams traded leads five times from there.

Downingtown West’s John Mulville follows his blocks for an 87-yard kick return touchdown on the opening play of the second half. (Nate Heckenberger – For MediaNews Group)

“You don’t always get what you deserve, and I thought we deserved to come out with a win,” West coach Mike Milano said. “We left everything on the field. … we battled and put in the effort, but didn’t get the result we wanted. That’s a hard pill to swallow.”

The Whippets, who were still getting over a tough loss to Kennett the week prior, really could’ve used a win to help their waning playoff hopes, but maybe found a little mojo as they continue their tough stretch with Bishop Shanahan and Downingtown East the next two weeks.

Coatesville will look to avoid a trap at Chester next Saturday morning, with the Eagles and Cougars closing out the regular season, as they look for another National Division title.

“We knew going in it didn’t matter that (West) was 3-3,” Matt Ortega said. “We knew when these two communities come together to play a football game we know we’re going to get their No. 1 effort. We fought till the end and thankfully we were able to pull it off. It’s a testament to the seniors and their leadership. They battled till the end and never quit.”

Downingtown West’s Ryan Waters gets pushed from both sides on a run in the third quarter. (Nate Heckenberger – For MediaNews Group)