Saleem, Ridley get back to playoff prep in rout of Harriton 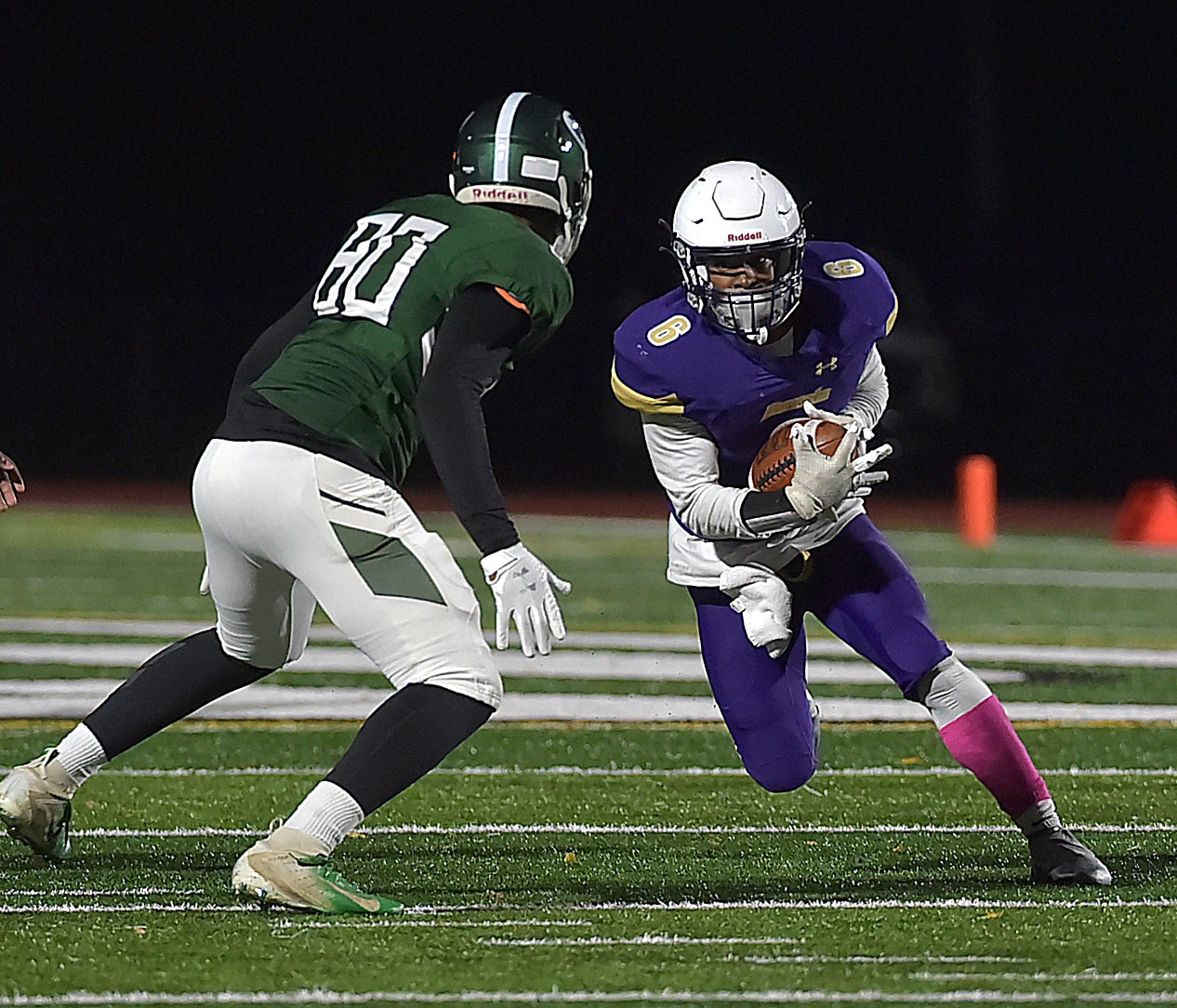 RIDLEY — You’ve got to look pretty far down the Ridley football roster before you find Nahaj Saleem’s name.

He’s still filed under his number from last season, No. 80, a hedge between his two positions on offense. Primarily an extra blocker at tight end, Saleem’s number was as lineman-adjacent as his role, but also not foreign to the occasional pass route.

This year, Saleem opted for a more play-making No. 6. It’s a little easier for opponents to read, too, especially when he’s mobbing a quarterback or streaking down the field after a reception.

Saleem’s duties Friday night in a 70-6 Ridley romp over Harriton were confined to blocking for a run game that the Rams couldn’t stop and disrupting a passing attack the Rams couldn’t start. But in catching a pair of touchdowns in last week’s showdown of unbeatens with Garnet Valley, Saleem showed how special he can be on both sides of the ball.

That privilege required a little campaigning on the practice field and a lot of extra work with Ridley quarterback John Heller.

“It took a lot of proving in practice,” the 6-1 junior said. “A lot of it happened in practice.”

It starts with defense for Saleem, as a versatile edge rusher or outside linebacker. With the Rams (0-7, 0-6 Central) operating out of a pass-heavy shotgun look, Saleem got after quarterback Logan Rothberg at will, contributing a sack and several QB pressures, including on Antonio Saahir’s first-half interception.

“It was a comeback week,” Saleem said, referencing the 65-37 loss to Garnet Valley. “We realized we did do good things in the first half, but at the end of the day, the score didn’t fall our way. We looked at that, worked off that and brought it back.”

His services weren’t needed in the passing game, where Heller was 8-for-9 for 111 yards. He threw a corner route up for Stephen O’Donovan to run under for an 11-yard score in the first quarter, added a one-yard sneak touchdown also in that 35-point frame and hit Paul Jackson for a 21-yard TD in the second. Jackson also scampered with an inside handoff on misdirection for a 10-yard score.

Owen Bosak escapes on 4th down for a TD.
It’s 56-0 Ridley at the half. Next score will be a final score or some other intervening cataclysm pic.twitter.com/rAUC2RXAOl

Tahir Mills ran for two touchdowns, including a 56-yarder on his first touch. He tallied 192 yards on 19 carries and earned Homecoming King honors at halftime. Ridley ran for 381 yards as a team with 524 yards of total offense.

For Harriton, Rothberg (12-for-25, 81 yards) assembled an eight-play march that led to Justin Krebbs scoring on a reverse from the 11 with nine seconds left in the third. Krebbs caught five passes for 33 yards.

Paul Jackson inside handoff for a 10 yard TD. I suspect you see where this is going.
21-0 Ridley pic.twitter.com/ne8WkVyXnC

After tasting defeat for the first time this season, Ridley is prepping for the playoffs: Taking care of business yes, but also sharpening execution for the postseason. Trying to recapture some of that feeling from last Friday, on either side of the ball, is part of it for Saleem.

“Scoring, that was the best,” he said. “Even the fans all talking and cheering, your teammates cheering, that’s always joyful.”