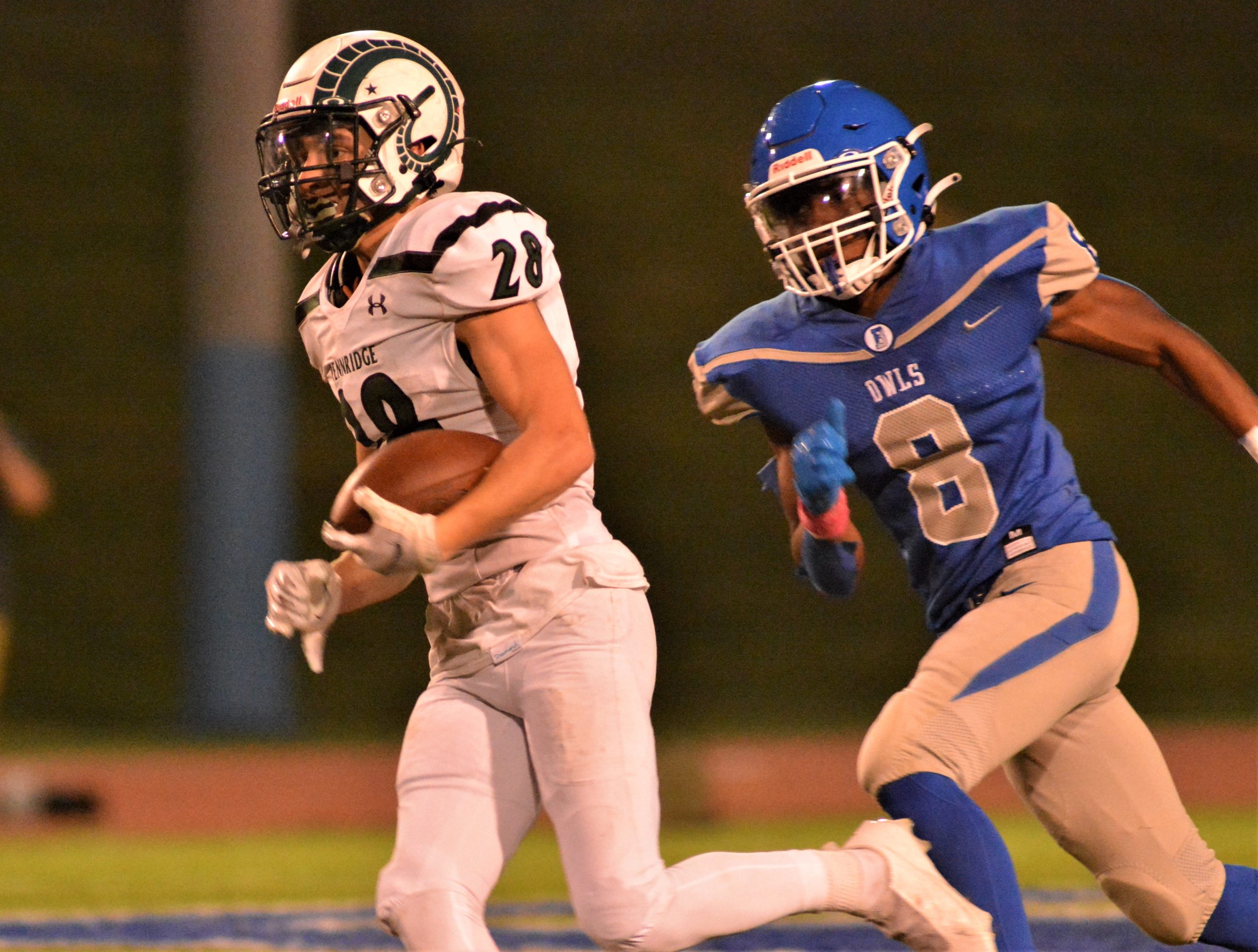 Pennridge's Nate Mossbrook (28) runs away from Bensalem's Iameer Stewart (8) for a touchdown during a football game on Friday, Oct. 8, 2021 at Bensalem Memorial Stadium. (Kyle Franko/MediaNews Group)

BENSALEM >> The Pennridge and Bensalem football teams were in a similar position Friday night as both entered the game in need of a victory in order to improve their chances of qualifying for the District 1 Class 6A playoffs.

Unfortunately, from a Bensalem perspective, that’s about where all the similarities ended as Pennridge crushed the Owls, 45-0, in front of a sizable home crowd in “Death Valley.”

There was nothing strategic or remotely surprising about yet another example of how Suburban One teams have dominated Lower Bucks County competition this season.

Simply put, Pennridge (4-3) whipped Bensalem (4-3) up front on both sides of the ball and was much too physical against the only Suburban One team in Lower Bucks with a winning record.

Pennridge’s Dylan O’Brien (43) celebrates with teammate Hunter Burdick (55) after O’Brien returned an interception for a touchdown against Bensalem during a football game on Friday, Oct. 8, 2021 at Bensalem Memorial Stadium. (Kyle Franko/ MediaNews Group)

“We talked this week about how we were 0-0,” replied Pennridge coach Cody Muller when asked if he considered this a must win. “Now we are 1-0, but when we get back to work on Monday we will be 0-0 again. We have to take this one game at a time.”

Coming off tough losses to North Penn (7-0) and Central Bucks West (6-1), Pennridge didn’t get on the board until late in the first quarter, but once the Rams started scoring the points came in droves.

After a short field goal by Sean Curry, Nate Mossbrook started the touchdown parade with a 56-yard burst on up the middle. The Ram lead was 24-0 at the half courtesy of a 32-yard interception return for a touchdown by Dylan O’Brien and a 23-yard run by Tyler Wetzel.

The second half was more of the same with Wetzel reaching the end zone on another 23-yard run and Brennan Fisher, racing 57-yards to put the Mercy Rule into effect in the fourth quarter.

Pennridge’s Tyler Wetzel (8) escapes the tackle attempt of Bensalem’s Josiah Leonard (2) as he runs for a touchdown during a football game on Friday, Oct. 8, 2021 at Bensalem Memorial Stadium. (Kyle Franko/MediaNews Group)

While Pennridge’s Wing-T was cranking out yardage and points, it was the exact opposite when Bensalem had the ball. The Owls had zero success getting a running game going against the Rams’ active defensive front.

Quarterback Matt Saunders did manage to connect on a couple of long passes, but was just 6-for-18 on the night. What’s more, Saunders was repeatedly sacked and Pennridge also got interceptions from Adam Mossbrook and Sam Kuhns in addition to O’Brien’s pick six.

Fisher led all rushers with 167 yards on just seven carries on an evening in which Pennridge completed just one pass. Obviously, there was no need for the Rams to throw the ball.

“I thought our offensive and defensive lines did a great job,” said Muller. “We still have some things to clean up (mainly penalties), but I liked the way our kids played hard.”

Bensalem played hard as well and came out strong defensively in the first quarter, but there’s only so much you can do when you are overmatched up front and the offense does so little to keep the defense off the field.

“We need to block better and we need to tackle better,” said Bensalem’s first-year coach Alex Houston, whose team wasn’t helped any with the loss of 280-pound two-way lineman Nashier Carter to a broken leg last week. “All we can do is regroup. The wins have been tough to come by around here so the fact we played a game in week seven that meant something is a big step for our program.”