Delco Football Roundup: Takes a while, but Bonner-Prendie blanks Carroll 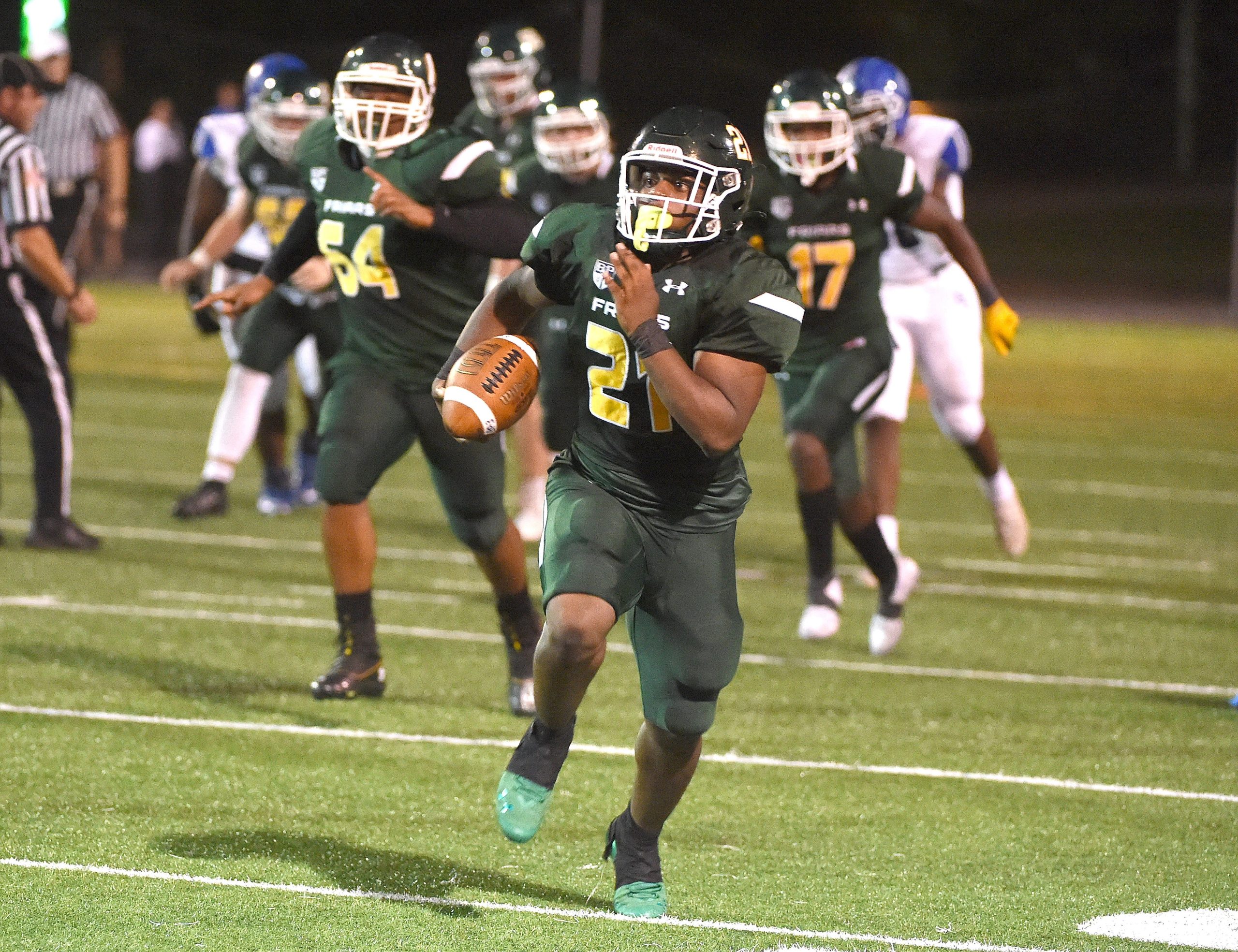 Bonner-Prendergast running back Mason Peterson breaks out to score a second-quarter touchdown in a game against Conwell-Egan. (PETE BANNAN-DAILY TIMES)

Bonner-Prendergast struggled to get things going on offense at home Friday night.  The difficulties did not last long.

The offense finally came to life and the defense pitched its first shutout of the season as the Friars rolled to a 48-0 Catholic League Blue Division victory over visiting Archbishop Carroll.

“We played well,” Friars coach Jack Muldoon said. “We were a little sluggish early but we got it going. This was the first week we were fully healthy and it took us a little while to get going.”

After a scoreless first quarter, Bonner-Prendie (5-2 overall, 3-1 PCL Blue) scored four times in the second quarter to take a 27-0 lead into the locker room at halftime.

Standout running back Mason Peterson and quarterback Shane Mulholland paced the offense. Peterson carried the ball 21 times for 163 yards and three touchdowns to reach the 1,000-yard mark of the season. Mulholland completed 7 of 9 passes for 106 yards and three TDs. He also added 46 yards rushing. Patrick Awo added a score to help the Friars bounce back from last week’s 26-20 loss to Neumann-Goretti.

The Friars are on the road the next two weeks. They visit Lansdale Catholic next Saturday and take on Archbishop Ryan the following week before closing out the season at home against Cardinal O’Hara Oct. 29.

“The defense did a great job and it was a nice opportunity to get some of the younger kids into a game,” Muldoon said.

The loss dropped Carroll to 0-7 overall and 0-4 in the PCL Blue.

The Buccaneers rallied from a six-point, second-quarter deficit to hand the Churchmen their second straight loss.

Junior quarterback Jake Fant put EA in good position to win. He scored on a 10-yard run in the first quarter to cap a long drive that gave the Churchmen a 7-0 lead. After Blair tied it, Fant hit sophomore wide receiver T.J. Lamb on a 20-yard scoring pass to put the Churchmen back in front, 13-7, after the PAT attempt failed.

Blair scored to take a 14-13 lead into halftime and added another score in the third quarter to stretch its lead to eight.

The Churchmen (3-2) head into Inter-Ac League play when they host Germantown Academy next Friday night at Smith Field.

With a little confidence, Wright and Haverford turn around deficit against Springfield
Saleem, Ridley get back to playoff prep in rout of Harriton