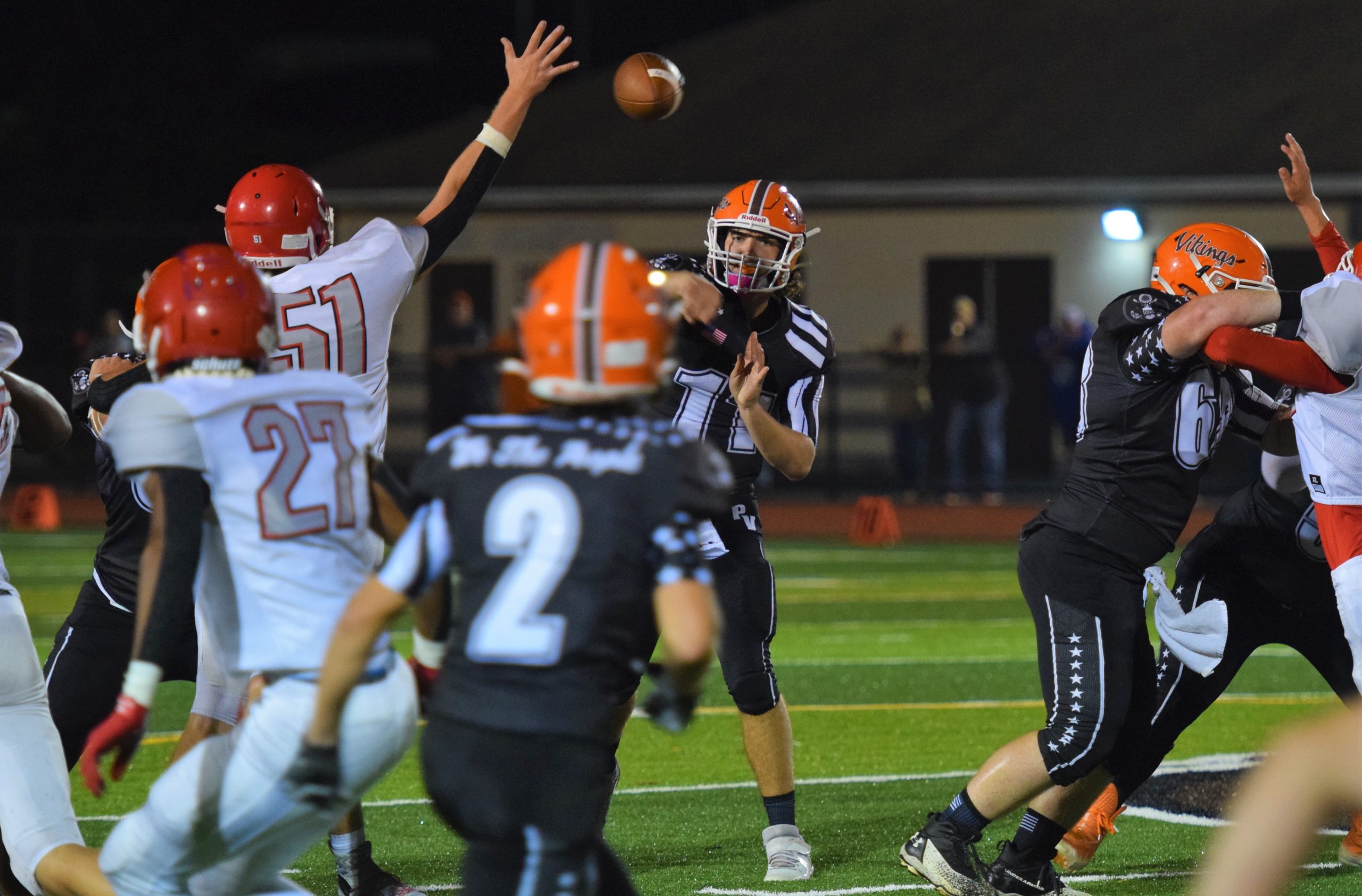 GRATERFORD >> Since the Pioneer Athletic Conference split into two divisions in the 2016 season, the big-school or Liberty Division title has been settled annually by the Spring-Ford/Perkiomen Valley contest.

It’s a tough set of circumstances for Owen J. Roberts — firmly entrenched as the No. 3 team in the division, finishing with winning records each season, but never finding their way to defeating both of the “big two” in the same campaign.

The Wildcats saw that streak of misfortune extended Friday night at Thomas J. Keenan Stadium when they fell to PV, 49-7, in a dominant performance from the division-leading Vikings.

Quarterback Ethan Kohler finished with 275 passing yards and four touchdowns to four different receivers as the Vikings (5-2, 3-0 PAC Liberty) gained a virtual 1.5-game lead in the divisional race with their wins over OJR and Spring-Ford, who are in a tie for second place at 2-1.

The outcome means Perk Valley can clinch their first trip to the PAC title game since 2018 with a win in either of their last two contests (at Boyertown next week, and hosting Methacton on October 22.)

What makes it so difficult for a squad like OJR – always a solid, competitive program if not yet elite – against Spring-Ford and PV? On Friday night, the answer was quarterback play as PV’s Kohler, in his third year as a full-time starter and fourth year of varsity experience, simply dominated with his precision and efficiency.

But Owen J. Roberts’ coach Rich Kolka says it goes beyond Kohler. “He’s good in all aspects of the game – he can run, and obviously throws well. But they’re good up front, too. Just strong all around.”

PV’s defense shared the credit as well, as they were able to limit area-leading rusher Avrey Grimm to 85 yards and a score on 17 carries – only two of which came after halftime.

“We knew the numbers he was coming in with,” said Rob Heist, head coach of Perkiomen Valley. “He’s a special player. I was very proud of our defense’s play tonight.”

The Wildcats’ issues were compounded by PV’s prolific and balanced offense maintaining its stride, scoring on their first three drives in a variety of forms. Kohler opened the scoring with an 18-yard toss to a wide-open Dawson Debebe, then finished a drive three minutes later on his own with an eight-yard run.

“We preach precision – and when I read the safety up close to the line, I broke outside,” Debebe said of his TD catch. “I trusted [Kohler] would find me there.”

A short punt gave the Vikings enough time to cap the first quarter with Rasheem Grayson’s one-yard run – the first of his two scores – making the tally 21-0 after one period.

The Wildcats would finally boot the PV offense off the field on a Brandon Kelley sack midway through the second period and spend the balance of the quarter embarking on their best drive of the night, capping the 10-play, 70-yard journey with Grimm’s four-yard TD run to cut the lead to 21-7 with 1:09 to play before half.

But the back breaker came 45 seconds later, when Perk Valley quickly drove 67 yards in six plays, Kohler’s second TD pass of the half going to Owen Peterlin from 24 yards out to re-open the three-touchdown lead at the break.

“It’s awesome being part of this offense,” said Peterlin. “We put in the work all summer so we could come out here and make plays.”

The Vikings wasted no time making the second half academic, as Kohler’s third TD pass found a wide-open Klimek over the middle, with the junior back doing the rest for a 51-yard score and a 35-7 lead just 14 seconds after halftime. “We knew we needed to come right out and keep the momentum after halftime,” said Klimek.

In all, the Vikings’ starting offense scored on seven of their first nine possessions before substituting liberally late in the third quarter. Grayson powered over the goal line two minutes after Klimek’s long score, and Kohler added his fourth scoring strike of the night – a 51-yarder to Michael Poruban – with 2:28 left in the third.

“We keep the intensity high. We push each other, challenge each other at practice,” said Poruban.

“We have playmakers everywhere,” Kohler summarized. “Spreading the wealth like we did tonight is ideal, when you don’t have to focus on any particular guy.

“But there are always things to work on – we got stopped once, had a turnover. We’re never going to be satisfied.”

The ‘Cats were forced to play without two-way force Aston Shrum, who missed the contest with an injury.

Coach Kolka says OJR has no time to feel sorry for themselves as the stretch run and District playoff push approaches.

“How do [OJR’s players] want their season to end?” the coach asked. “That’s what this comes down to. Yes, tonight’s disappointing, but we need to get back to work. We have a chance to make the playoffs, and that doesn’t happen all the time.”

The Wildcats are back in action hosting Norristown next Friday night.

Notes: Perkiomen Valley held Salute to Service Night at Friday’s game, honoring all past and present members of the Armed Forces from the Perkiomen Valley marching band, cheerleaders, and football program.