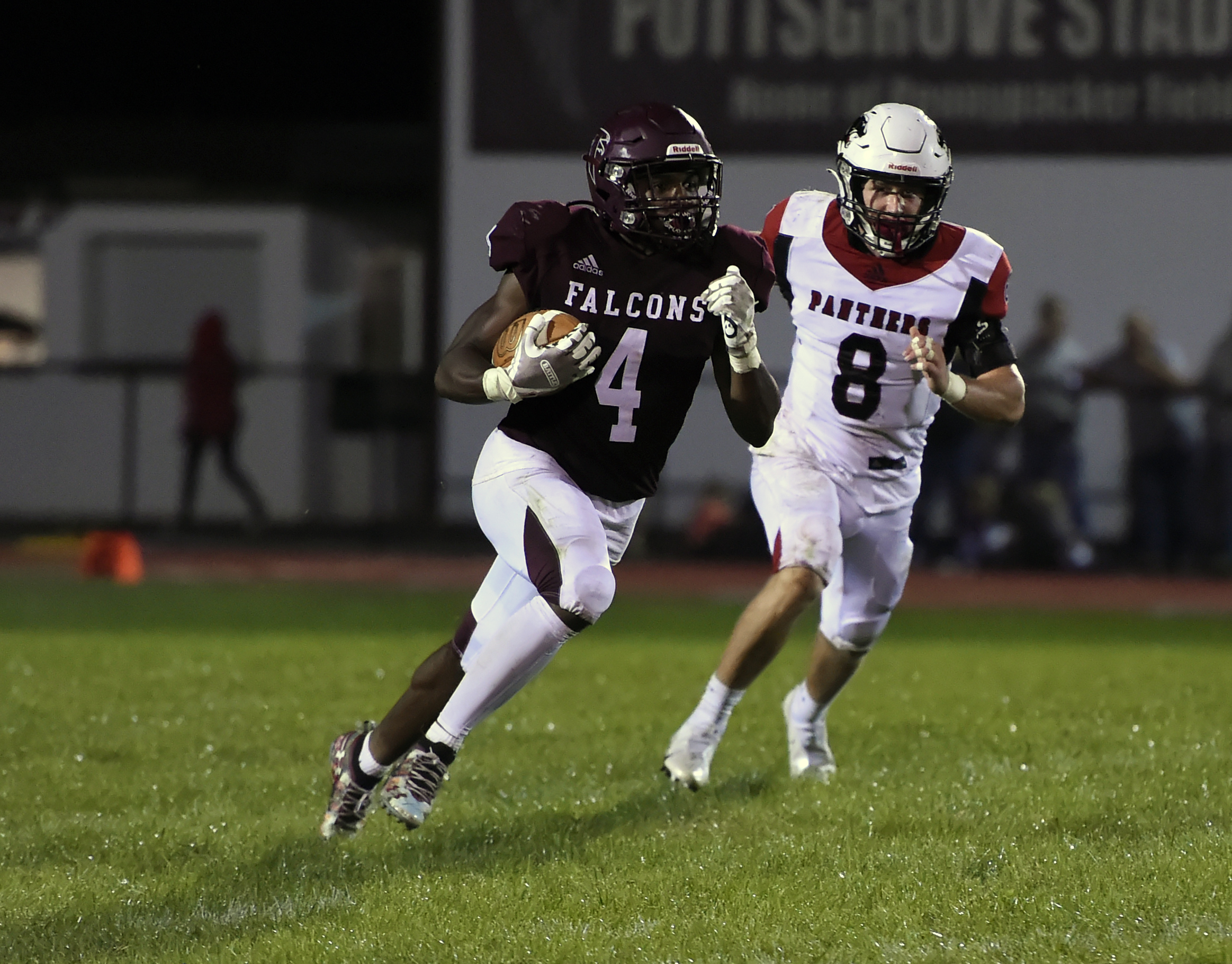 Of the many unfortunate subplots to the disjointed 2020 high school football season, perhaps the greatest loss (speaking strictly in terms of football) was one full year off the careers of so many young players.

Rising sophomore stars from 2019 went immediately to senior leaders this year, and worst of all, some players lost their senior season altogether.

Pottsgrove’s Amir Brunson was an example of a player many looked forward to seeing in 2020. Brunson showed flashes of brilliance as a freshman in 2019 during an uncharacteristically down season for the Falcons and figured to take on a greater role in 2020’s offense.

It may have taken an extra year, but Brunson is fulfilling that promise and more in 2021. In Friday night’s 36-20 victory over Upper Merion, the junior returned a kickoff for a touchdown for the second game in a row — and third time in four games. For good measure, Brunson added his first receiving touchdown of the year (a 58-yarder from QB Ryan Sisko), while adding a pair of sacks and an interception to complete his day.

Friday was a “big play” night for Pottsgrove (4-1, 2-0 PAC Frontier), as Sisko added a 78-yard TD run and Vinny Scarnato a 50-yard punt return for a score. Sisko made both of his completions on the evening count, finding Tyler Kaufman for 70 yards in addition to Brunson’s 58-yard score.

“We just rep kickoff, kick return all the time,” said Brunson, who already has three kick return touchdowns this season. “Everyone does their job, and it works out perfectly.”

Mark White has three of Pottsgrove’s seven sacks on the evening, as they overcame a 342-yard passing performance by Upper Merion’s Zayd Etheridge.

Given the way it started, the Falcons can’t help but be happy with where they stand at this point in the season – their lone loss coming in quadruple overtime to 6A Boyertown, placing them directly in the thick of not only the PAC race but the District One Class 4A playoff standings as well. Pottsgrove sits atop the Frontier Division along with Pope John Paul II, and figures to be heavy favorites in their next two contests before what would potentially be a division championship game in Royersford with the Golden Panthers on October 23.

The District playoff race is a tight one in 4A, where only four teams make the field. A season-opening cancellation of their game with West Catholic put the Falcons in an early hole, but their four wins in five outings have the team in 3rd place in Class 4A after week six. Those victories include 5A Phoenixville, and another 5A opponent (Upper Perkiomen) looms, meaning opportunities for added points in the standings. Of course, the season will end with a contest against a 6A Liberty Division opponent on PAC crossover week, so the Falcons are very much alive for the possibility of hosting at least one game in districts.

Those details, however, will work themselves out in time. For now, Pottsgrove continues to find ways to win behind their do-it-all running back/linebacker Brunson. After a down year in 2019 and an almost-lost season in 2020, a run at the 2021 PAC championship suits the squad just fine.

Around the Area >> In tandem with its divisional rivals at Pottsgrove, Pope John Paul II (4-2, 2-0 PAC Frontier) continued to separate itself from the rest of the Frontier Division with a 28-10 victory over Phoenixville (1-4, 0-2 PAC Frontier.) Overcoming a slow start that saw them trail 3-0 at the break, the Golden Panthers hammered away at the Phantoms’ defense late with Josh Little (176 yards, two TDs) leading the attack. Steele DePetrillo (nine carries, 35 yards, TD) broke the ice midway through the third quarter, and quarterback DJ Clarke offered a steady 12-of-15 passing performance for 89 yards and a score. The PJP defense caused three Phoenixville turnovers in the winning effort.

Upper Perkiomen got its second win of 2021 in shutout fashion, blanking Pottstown 29-0. Logan Simmon (139 yards) and Brady Thompson (110 yards, 2 TDs) each eclipsed the century mark on the ground in what coach Tom Hontz called the Tribe’s most complete performance of 2021. It was Simmon’s first action since the season opener against Boyertown, and the senior made it count, leading the Tribe’s 272-yard output on the ground. Thompson added a fumble recovery as Upper Perk sent its Homecoming crowd home happy.

Perkiomen Valley and Owen J. Roberts took distinctly different paths to setting up their first-place battle at Thomas J. Keenan Stadium this coming Friday, as the Vikings lit up the scoreboards in a 56-12 thrashing of Norristown, while the Wildcats squeaked past Methacton 7-6 in a throwback-style slugfest. For Perk Valley (4-2, 2-0 PAC Liberty), QB Ethan Kohler was his typically stellar self, shaking off a slow start to put up an efficient 11-15 passing performance for 190 yards and four scores, while adding another two touchdowns on the ground. After falling behind 6-0 early, PV put up the next 21 points and the game’s final five scores after Norristown got a 2-yard TD pass from Chris Carter to Julian Arthur.

The Vikings will welcome OJR this week, and the Wildcats (5-1, 2-0 PAC Liberty) are the league’s hottest team riding a five-game winning streak after a season-opening overtime loss to Conestoga. This week brought their closest call, as 405 yards of total offense yielded only seven points. The defense saved the day, however, limiting Methacton to 159 yards and yielding nary a point (the Warriors’ score came via a 43-yard interception return by linebacker Chris Augustine). The area’s leading rusher, Avrey Grimm, continued his torrid 2021 with 193 yards rushing on 29 carries. Grimm now stands at 1,262 yards on the season after leading the league in the category a season ago.

Spring-Ford ended its three-game losing streak in emphatic fashion, controlling play throughout a 42-7 decision over Boyertown. Senior Ryan Freed and freshman Matt Zollers split time behind center, combing to complete 15 of 16 passes for a total of 296 yards passing. Junior Art Vigilante fired another completion to give the Rams a 94 percent completion percentage for the evening. Spring-Ford (3-3, 1-1 PAC Liberty) outgained the Bears (2-4, 0-2 PAC Liberty) by a 3:1 margin over the contest. Senior running back Leo Egbe(14 rushes, 77 yards) scored the lone touchdown for Boyertown.