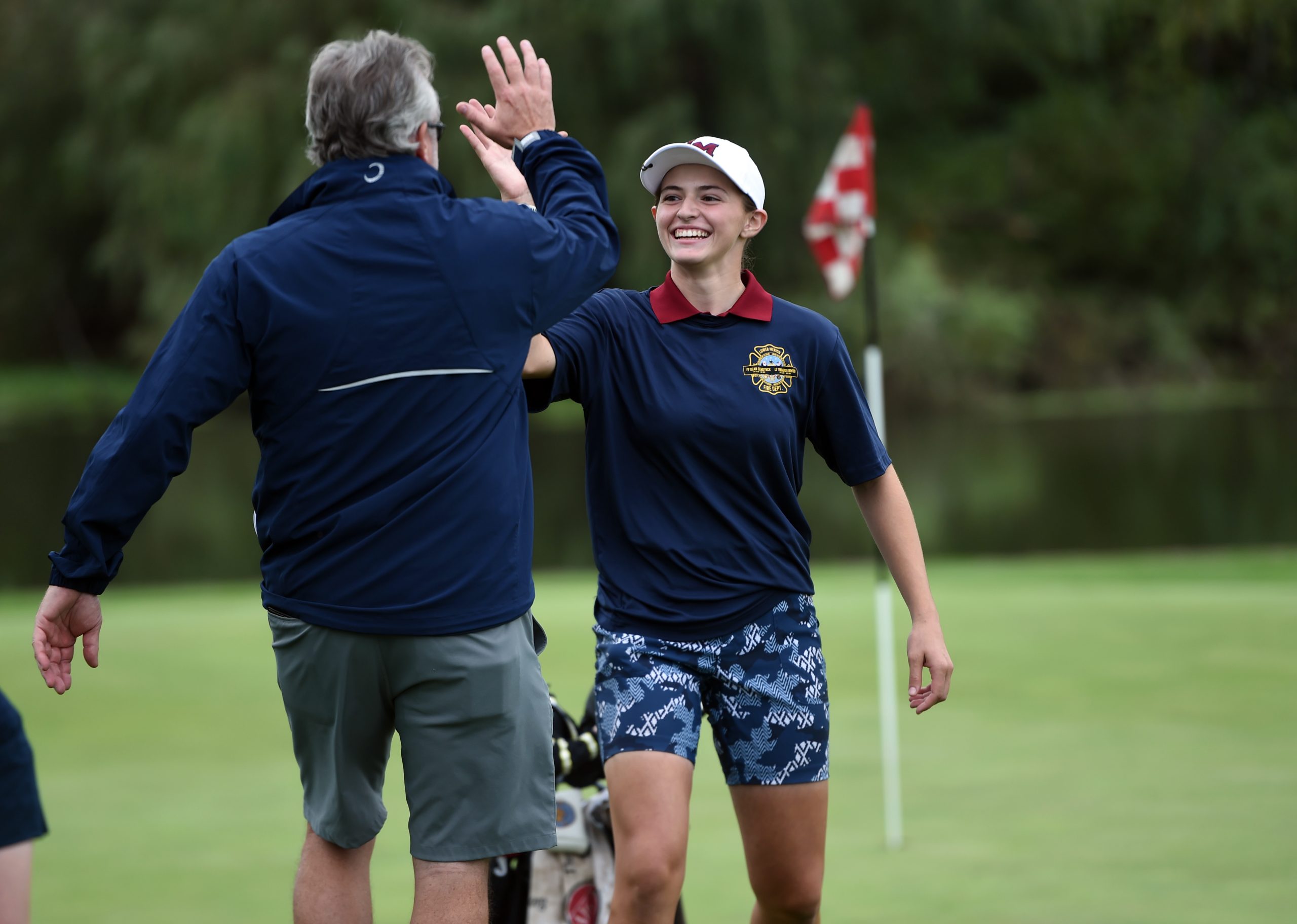 LIMERICK >> Tied with two other players tied heading into the 18th hole at Turtle Creek Golf Course, Lower Merion junior Sydney Yermish knew if she wanted to walk away with a District 1 Class 3A championship she was going to have to take it.

Standing from about 193 yards out after her drive, Yermish decided to try and clear the water in front of the green and reach the par-5 in two shots.

The risk was worth the reward when Yermish’s five-iron hopped onto the right side of the green.

Though her eagle putt just missed after hitting the cup, a birdie proved good enough to deliver Yermish her second District 1 title in three years — posting a 5-under for the tournament to best Downingtown East senior Ava O’Sullivan and Unionville junior Mary Grace Dunigan at 4-under.

“Once I saw my lie and how far and the angle, I knew I had to go for it,” Yermish said.

“I definitely won it with that shot,” she added. “It was amazing to hit that and for it to work.”

GIRLS GOLF: Sydney Yermish’s eagle putt lips out, but it doesn’t matter as she wins the District 1-3A title with a birdie. pic.twitter.com/RrorpKVybW

Yermish did not get the opportunity to defend her District 1 Class 3A girls golf championship last season. After winning the title as a freshman in 2019, Yermish and the rest of the Central League competitors were left out of the district and PIAA field during a COVID-impacted 2020 season.

She came into Tuesday tied for third at one-under par — four shots behind O’Sullivan and one behind Dunigan.

Yermish followed a 70 on Monday at Raven’s Claw Golf Course with a four-under 68 at Turtle Creek, which included an eagle on hole two and birdies on 13 and 18, to win her second district championship.

“It was amazing,” Yermish said. “I won it my freshman year, so last year was really hard for me to sit out. It just made me want it more this year because I knew you can’t always have this kind of experience. It was amazing that I was able to do it again, and I was really excited.”

Yermish and Dunigan made up ground on O’Sullivan by the eighth hole Tuesday and the trio stayed tied for most of the final 10 holes.

Dunigan briefly fell a shot behind when she bogeyed 16, but she came right back with a birdie on 17 that included a terrific approach shot to send the three leaders into the final hole all tied up at four-under.

“It’s really exciting, but also a little intense,” Dunigan said. “I was a little nervous. Definitely standing over my last putt, I was super nervous and kept thinking about, ‘What happens if I make this or miss it.’ It was really exciting though.”

O’Sullivan had a similar experience last season when she was in a three-way tie with three holes to play before coming away with a two-stroke victory and the 2020 District 1 title.

“It’s fun and it’s nerve wracking at the same time,” O’Sullivan said. “It’s hard to focus on just yourself, but that’s what’s important. Just focus on what you can control.”

After Yermish reached the green in two on 18, Dunigan and O’Sullivan both put themselves in birdie range with their third shots. They finished with pars, and Yermish’s short birdie putt sealed the tournament victory.

“I was really excited for Sydney,” said Dunigan, who has been friends with Yermish since the two met at states in 2019. “We’re really good friends. I was glad she got it on there. I knew I really didn’t have a chance to do the same shot she had because I didn’t have the distance. I definitely wanted to make that putt and be in a playoff, but it’s alright.”

O’Sullivan — the 2020 champion — improved on last year’s championship winning score of 146 (three-over) by seven strokes in her second-place effort.

“They were really low this year,” O’Sullivan said. “It’s hard. This district is really competitive. The scores get lower and lower every year.”

Yermish, Dunigan and O’Sullivan all qualified for the PIAA championships with their finishes and were joined at states by six other District 1 competitors.

“I’m super excited,” Dunigan said. “I really wanted to get to states. I knew it was going to be super competitive this year. Everyone went a lot lower. I just wanted to make it there.”

West Chester East senior Victoria Kim gets out of a greenside bunker on the 8th hole during the 2021 District 1-3A girls golf championship Tuesday at Turtle Creek Golf Course in Limerick. (Owen McCue – MediaNews Group)

Along with collecting hardware, Yermish is also collecting donations this postseason.

Yermish is a volunteer first responder for the Penn Wynne-Overbrook Hills Fire Department. This summer she lost a friend — firefighter Sean DeMuynck — during a response to a house fire.

The passing of DeMuynck — a mentor and close friend of Yermish’s — inspired her to start the ‘Birdies for the Fallen’ campaign. The goal of the campaign is to raise money and awareness for the National Fallen Firefighters Foundation — a non-profit that develops and expands programs to honor fallen fire heroes and assist the families left in the wake of loss.

Yermish’s campaign accepts one-time donations and also pledges for every birdie she scores this postseason. Through the Central League tournament and two days of the District 1-3A tournament, Yermish has raised $6,255 in direct donations and her donations via birdie are up around $4,100 with states left to play.

“I was able to raise $1,600 for the National Fallen Fighters Foundation today,” Yermish said. “I would have loved it to be a little more if there were less lip outs, but it was a good day.”