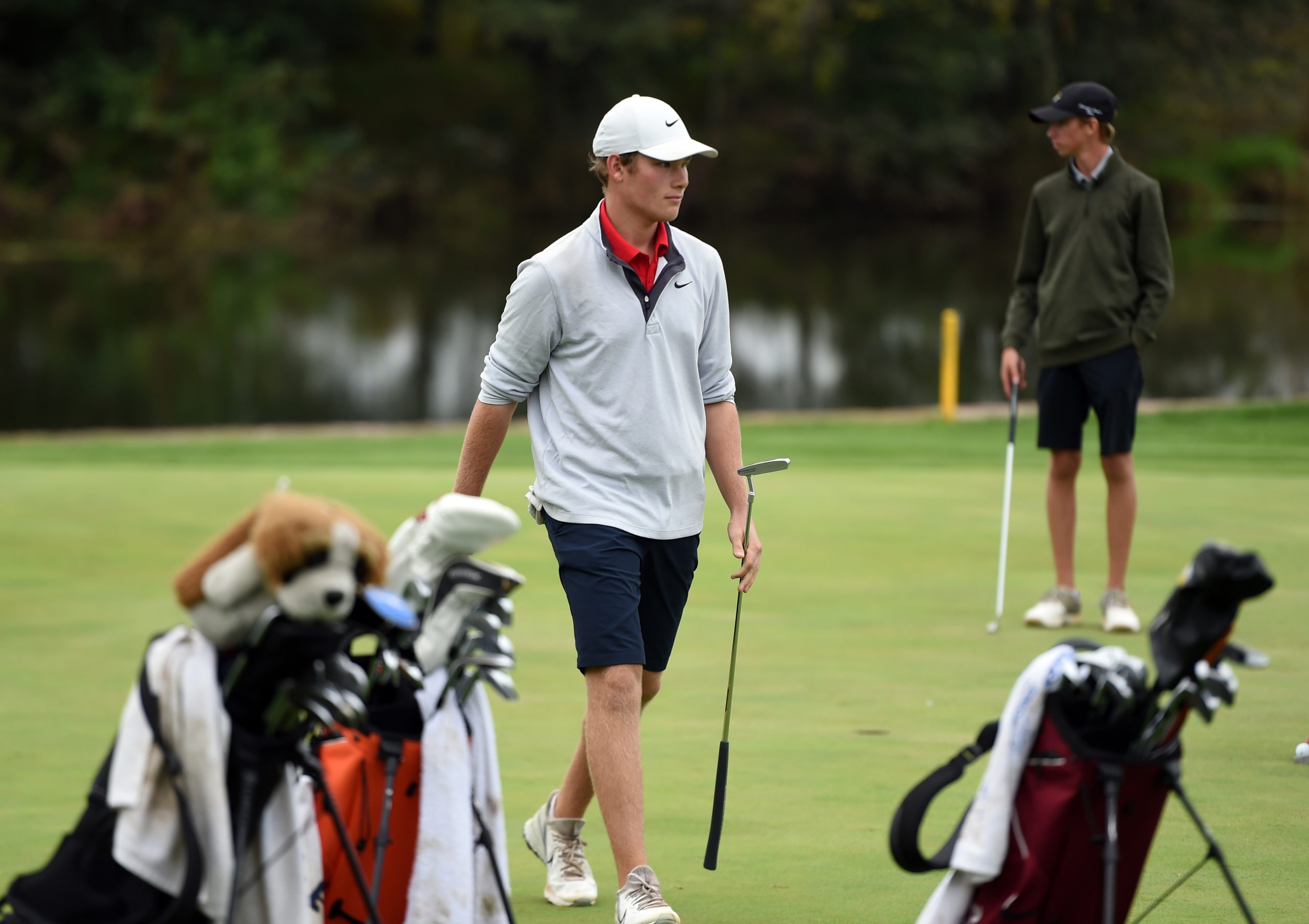 At the 2020 District 1 tournament last October, Sanderson and Gross were tied for the lead in the final round as they came to the 17th tee at Turtle Creek, and Gross made two pars to win by two strokes. Tuesday afternoon, Sanderson nailed a 17-foot birdie putt on the second playoff hole to win the individual title.

Sanderson trailed Gross by two strokes after the first round Monday, but fired a 4-under-par 68 Tuesday to tie Gross at 140 after two rounds.

He did particularly well on the par 5s, playing them in four under par. On the second playoff hole — the par-5 8th hole — he got the winning birdie. His third shot was a pitch over water that landed on the fringe of the green and rolled to within 17 feet of the hole.

“I played No. 8 great the whole tournament,” said Sanderson. “In the playoff, I crushed my drive and it went a little to the right, so I had to kind of punch out my next shot, and I pulled it a little bit, almost into a hazard. Then I had 67 yards to the pin, took a lob wedge and kind of went under it a little bit but got pretty lucky and the ball kicked forward, got up near the hole.”

Both players were on the 8th green in three. Gross, who was away, putted first, and barely missed his birdie attempt. Sanderson, who captured the PIAA 3A boys’ individual title last year, then coolly sank his 17-footer for the win.

Gross had an up-and-down round Tuesday. He entered the day’s play with a one-stroke lead after shooting a 2-under-par 70 Monday. On Tuesday, he went 4-over par in an early three-hole stretch (Nos. 4, 5 and 6), getting a double bogey on No. 5 after hitting his tee shot out of bounds, then he fought back, birdieing three holes in a row (Nos. 7, 8 and 9).

He played the back nine in 2-under par, and needed a birdie on the par 5 18th hole to enter a playoff with Sanderson after Sanderson birdied 18 himself in the group before. Gross hit his third shot on No. 18, a 9-iron, to within 5 feet of the hole, and in front of a sizable crowd of onlookers sunk the putt.

Gross and Sanderson then headed to the No. 1 tee, and the D-West sophomore hit his tee shot into the right rough. His approach shot was a good one, finishing about eight feet from the cup, but he missed his birdie putt, and when Sanderson parred the hole, they headed to hole No. 8, as it turned out the final hole of the day.

“I made multiple 20-foot putts – 3 of them – today, and I was hitting a lot of greens,” said Kerprich. “It was windy and misty on the front nine, but on the back nine the conditions were good.”

West Chester Henderson senior Dylan Kochis finished fourth, shooting a 4-under-par 68 Tuesday after a 75 on Monday. He had a hot streak toward the end of his round, birdieing three holes in a row (Nos. 12, 13 and 14).

“Everything was just working for me [in that 3-birdie stretch],” said Kochis. “You just kind of get into the flow, and start hitting good shots, and you feel good about that.”

Bishop Shanahan junior Ben Saggers finished fifth, with a 73-72-145 for his two rounds Monday and Tuesday. His Tuesday round was highlighted by an eagle on the 8th hole, where he hit a 3-wood approach to within 12 feet of the hole.

West Chester Rustin senior Eric Miller and Garnet Valley’s Matt Pulcinella tied for sixth place, at 146 for two rounds. Pulcinella was only stroke from the lead Monday with a 71. Miller, who tied for 8th place at last year’s PIAA 3A individual state tournament, started his District 1 round Tuesday on a high note, birdieing the first two holes, the first with a 40-foot putt.

Central Bucks West finished first in the District 1 3A boys’ team tournament, with an 8-over-par total of 296, five strokes ahead of second-place West Chester Rustin (301), and will be advancing to the PIAA 3A boys team tournament. The Central Bucks West team total at Districts included the Tuesday rounds of Chase Feraco (70), Alex Feraco (71), Kevin Lydon (75) and John Lee (80). The Rustin team total included the Tuesday rounds of Eric Miller (72), Ryan D’Ariano (72), Trevor Talerico (78) and Sam Feeney (79).

In the District 1 2A boys’ individual tournament, Jenkintown senior Jeff Staples finished first (72-78-150) and Jenkintown junior Will Gouveia placed second (73-81-154). Both advance to the PIAA 2A state tournament.

NOTES >> The Downingtown West boys competing in the District 1 3A golf individual tourney were wearing pink shirts instead of shirts bearing the Whippets’ colors. When asked why his players were wearing pink, D-West boys golf coach Rob Coyne shared a statement by the D-West boys (team captains are Nick Gross and Bret Bergey) that said, “We are wearing these other colors to highlight that we are not representing Downingtown West today, but the four of us and our coach are very much still a team. We feel let down by the leadership and administration of the Ches-Mont golf league. There was a lot of confusion over the bylaws this year and we didn’t really have clarity among all of the participants in the league throughout the season as to how you qualify for districts, which isn’t really fair to anybody. We just don’t feel like that leadership has demonstrated that they have our best interests in mind and we hope that changes in the future.”