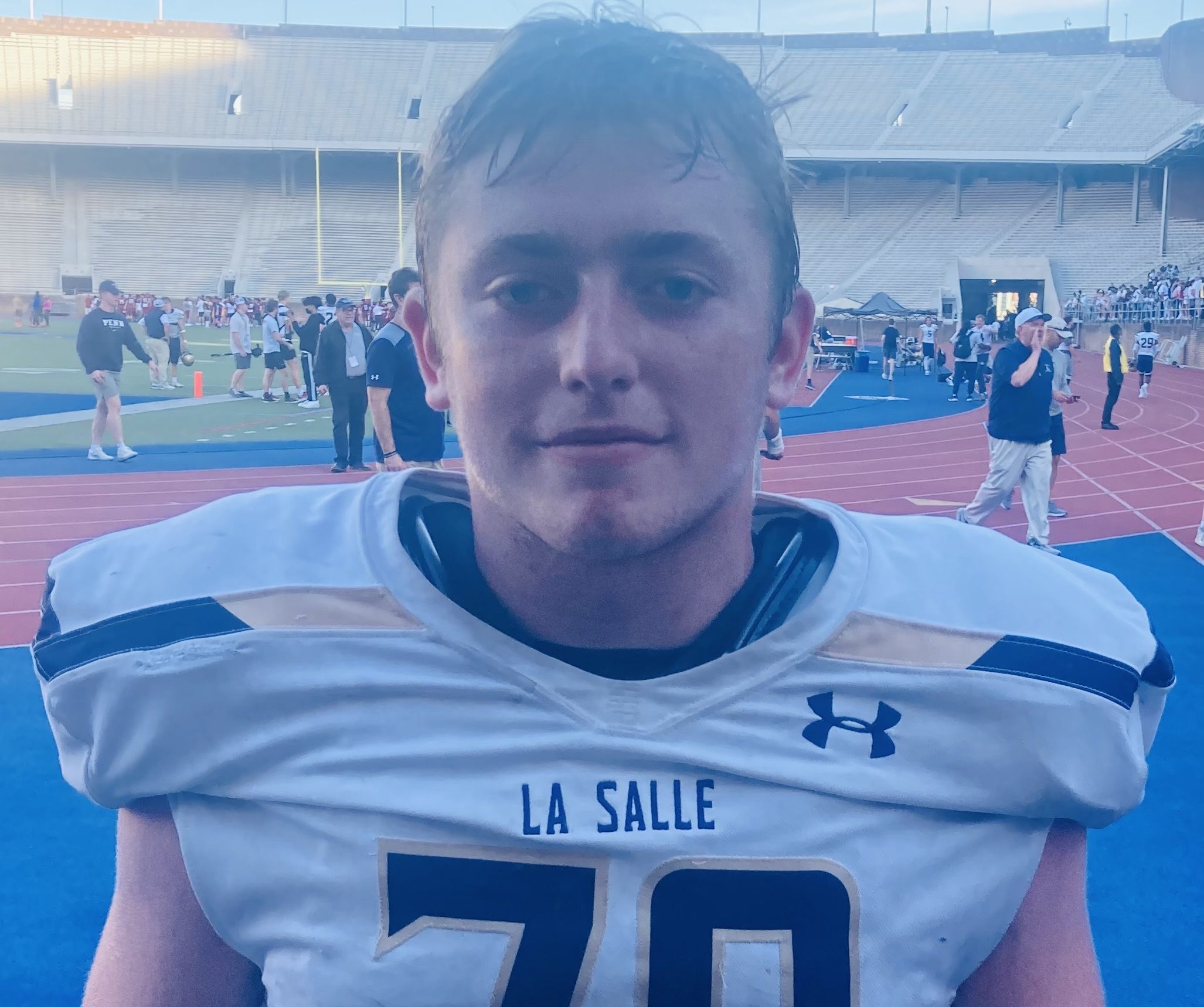 PHILADELPHIA >> Sam Brown bounced off one tackler, then another, drove forward and extended the ball over the goal line to give La Salle its first lead of Saturday’s contest with rival St. Joseph’s Prep.

The touchdown followed up Brown’s first score, an 82-yard dash down the right sideline.

Brown rushed for 120 yards and a pair of TD’s and also hauled in a 32-yard pass.

Teammate Ryan Moore caught three balls for 128 yards, had a punt down to the one-yard line, and intercepted a pass late in the fourth quarter to lock up the victory.

Quarterback Alan Paturzo threw for 178 yards and had a six-yard rushing touchdown that would wind up being the winning points.

Everyone did their part, and then some. The Explorers put together a magnificent performance in front of a playoff-type atmosphere at Franklin Field, earning a 28-21 victory over the Hawks, La Salle’s first over its rival since 2015.

“We’ve been working so hard for this for the past four years. It feels amazing,” said senior right tackle Luke Shissler, part of an offensive line that paved the way to three third-quarter touchdowns.

“Preparation,” Shissler said of what made the difference for La Salle this time around. “The coaches had a great plan. It was all-around perfection since August.”

Brown’s 82-yard sprint down the right sideline evened things at 14 apiece in the opening moments of the third quarter.

A turnover on downs by the Hawks deep inside La Salle territory added to the Explorer momentum, and they were soon back on the move.

Brown carried six times on the go-ahead drive, including the five-yard surge into the end zone that gave La Salle a 21-14 advantage.

After another stop by the defense – Abdul Carter was a force for La Salle, the special teams came through.

A St. Joe’s punt was partially blocked by Matt Mitchell, and the Explorers took over at the Hawk 25.

Four plays later, Paturzo found a crack in the St. Joe’s line and slipped into the end zone, stretching the La Salle lead to 28-14 with a minute left in the third.

La Salle had three possessions in the third quarter, and all went for six.

“That was the difference,” Shissler said. “That won us the game.”

The Hawks would get within 28-21 with 9:31 left to play on a six-yard scoring pass from Samaj Jones to Mike Ditrolio, but La Salle’s defense had two more stops to wrap it up, including Moore’s interception.

The second half was a complete turnaround from the first.

St. Joe’s received the opening kickoff and marched 65 yards in nine plays to take a 7-0 lead.

Key on the drive was an 18-yard connection from Jones (132 passing yds, 110 rushing) to David Washington Jr.

Jones ran in from 20 yards for the touchdown, putting the Hawks ahead early.

La Salle seemed poised to answer when Paturzo hit Moore down the seam for a 47-yard gain.

But the Hawks got an interception from Shamir Johnson to hault the drive on fourth down.

La Salle did reach the end zone on its first series of the second quarter to draw even.

Moore again was key, his 31-yard gain on a short pass play setting up the Explorers deep in St. Joe’s territory.

Paturzo hit E.J. Wentz for a three-yard pass and a touchdown, deadlocking things at seven apiece early in the second quarter.

The Hawks immediately regained the lead, driving 80 yards in 10 plays to up 14-7. Jones scrambled around to buy time, then found Washington Jr. for a 25-yard touchdown with five minutes left in the first half.

The Hawks would take their seven-point lead into the locker room, but a third quarter to remember was coming soon for La Salle.