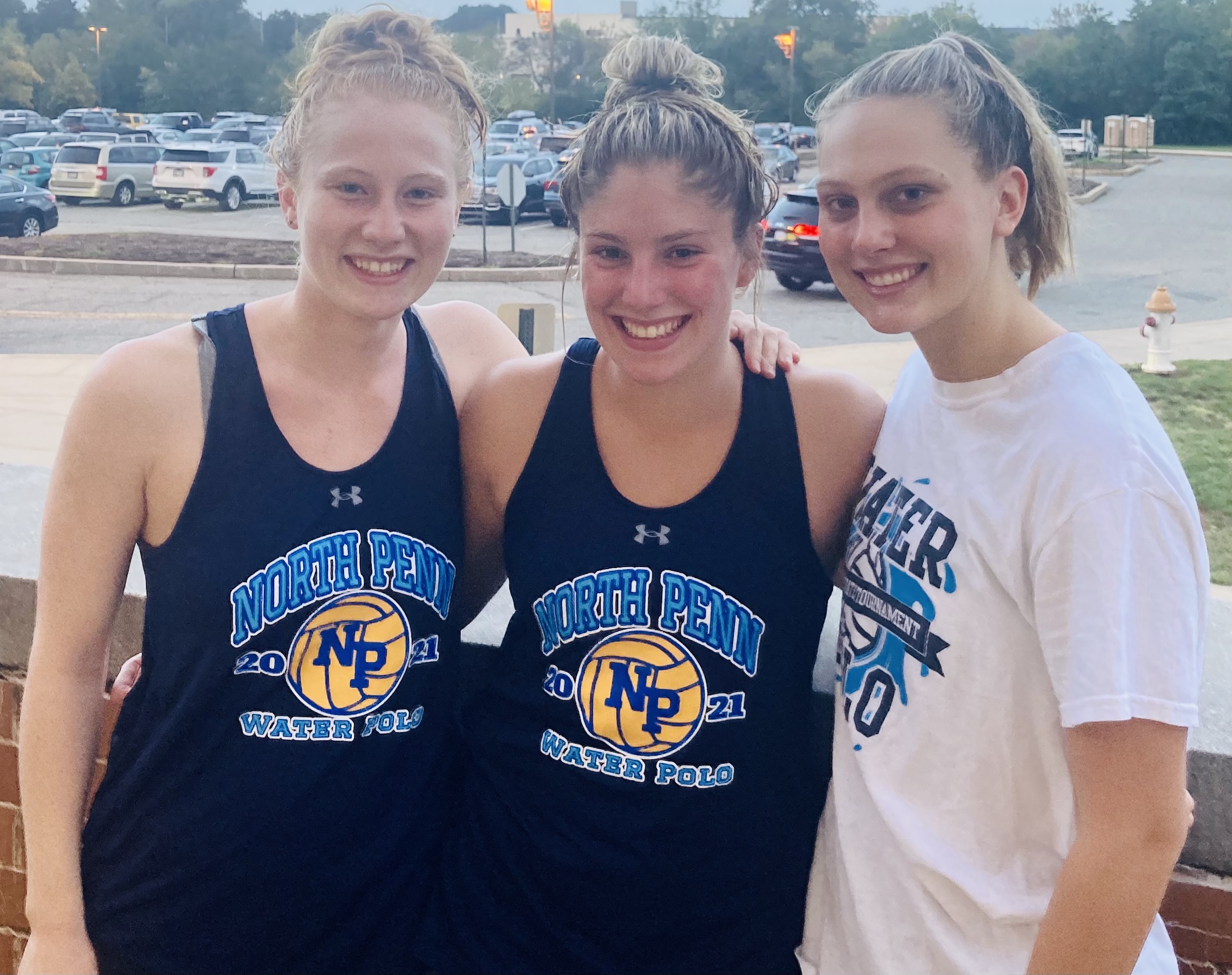 TOWAMENCIN >> Things are starting to look – and sound – more and more familiar for the North Penn boys and girls water polo teams.

“Last year, not having that many fans in the stands (due to the pandemic), it was quiet and awkward when you scored,” the Knights’ Bobby Freece said with a smile. “But now you have kids from the school showing up and it just makes the environment 10 times better, and it makes us play better because we know we have people supporting us from the back. And it makes everyone happier and it’s a more eventful game.”

Both the boys and girls squads put on quite a performance Tuesday night at The Rick Carroll Natatorium, pulling away to impressive victories over rival Souderton.

The NP boys, after leading 5-3 at halftime, were dominant in the second half and emerged with a 15-5 win over Big Red.

The NP girls earned a 10-3 victory over Big Red in the first half of the doubleheader.

“It was great. We hadn’t played this team since the summer so it was nice to be able to play them and see our crosstown rivals and see a bunch of our friends,” said the Knights’ Paige Mitchell.

Mitchell had a tremendous game for the Knights, leading the way with five goals and adding a pair of steals.

Said Mitchell of this team’s mindset: “A state championship is always the goal. Each game, you wanna go out and win and do the best that you can.”

The offense also drew from contributions made by Ava Zollars, Charlie Shaw and Emma Raser, who added a goal each, and from Brenna Mancini, who scored twice for the Knights.

“I think it’s a good mix,” said Zollars, a senior, speaking of the blend of veterans and newcomers. “I really like having the friendships between the younger girls and the older girls.”

“With our team having so many state championships under our belt, we kind of needed that loss (a year ago at states) to realize how much it meant to us and to come back stronger. And that’s really gonna help us this year.”

Luna Hutchinson, another senior along with Zollars and Mitchell, locked things down in net, securing 13 saves.

“I think it’s a really good team. I think we’re all really strong. It’s a deep team too and we’re all working really well together this year,” said the goalie. “I’m really excited. It’s my senior year so it’s my last year. I’m really hyped coming into the season. We had a great season last year and we just want redemption at states.”

Tim Schwar (left), (Bobby Freece (center) and Danny Dunigan all were key for North Penn in its win over Souderton on Tuesday, Sept. 28, 2021. (Kev Hunter/MediaNews Group)

The NP boys turned it on after the break on Tuesday night.

“We played a little sloppy in the first half. But then in the second half, coach (Jason) Grubb really just told us to step it up and we just had to kick it in,” said Danny Dunigan, who made 10 saves in net for the Knights.

When the junior looks out in front of him, he sees a more experienced team in the pool.

“Last year, it was kind of a first year for everyone,” he said. “We had a lot of new starters. A lot of us were new. It was a good time to get to know how varsity feels as compared to J.V. It really helped us prepare for this season.”

Balanced North Penn got a game-high six goals from Aidan Faikish, and four each from Bobby Freece and Danny Mitchell.

“I think the chemistry’s amazing,” said Freece, a senior. “We’ve all known each other since we were younger. We all played on the same team, all played middle school water polo together. So all of us being together, we’re starting to click a lot. I’m really excited to see what the future’s gonna hold.

“Going to states, possibly winning states – there’s high expectations for this team. We just gotta keep our heads screwed on straight and keep focusing on each other and the team.”

Tim Schwar, another key piece to the puzzle, spoke of the team’s resolve.

“We were coming off a bad loss on Saturday to Brunswick so it was tough getting right back into the pool,” the senior said. “We came out a little slow, but towards the end we started to pick it up.

“It’s always fun when fans come out – when the crowd cheers for you after you score or make a steal, it feels really good. It’s really encouraging.”

There’s been plenty to cheer about.

“The boys are pretty quick and they’re very aggressive on their drives,” Grubb said of his squad. “And we’re a very balanced team as opposed to years past. A lot of guys know how to control the ball, how to move, how to get position.

“(For the girls team), Paige does a really good job of taking over the middle of the pool. We have a little bit of a younger crew around her, trying to figure out where to go and where to be. And it’s been a steady incline for them.”