Souderton gets back to basics, tops CR South to stay perfect in SOL Continental 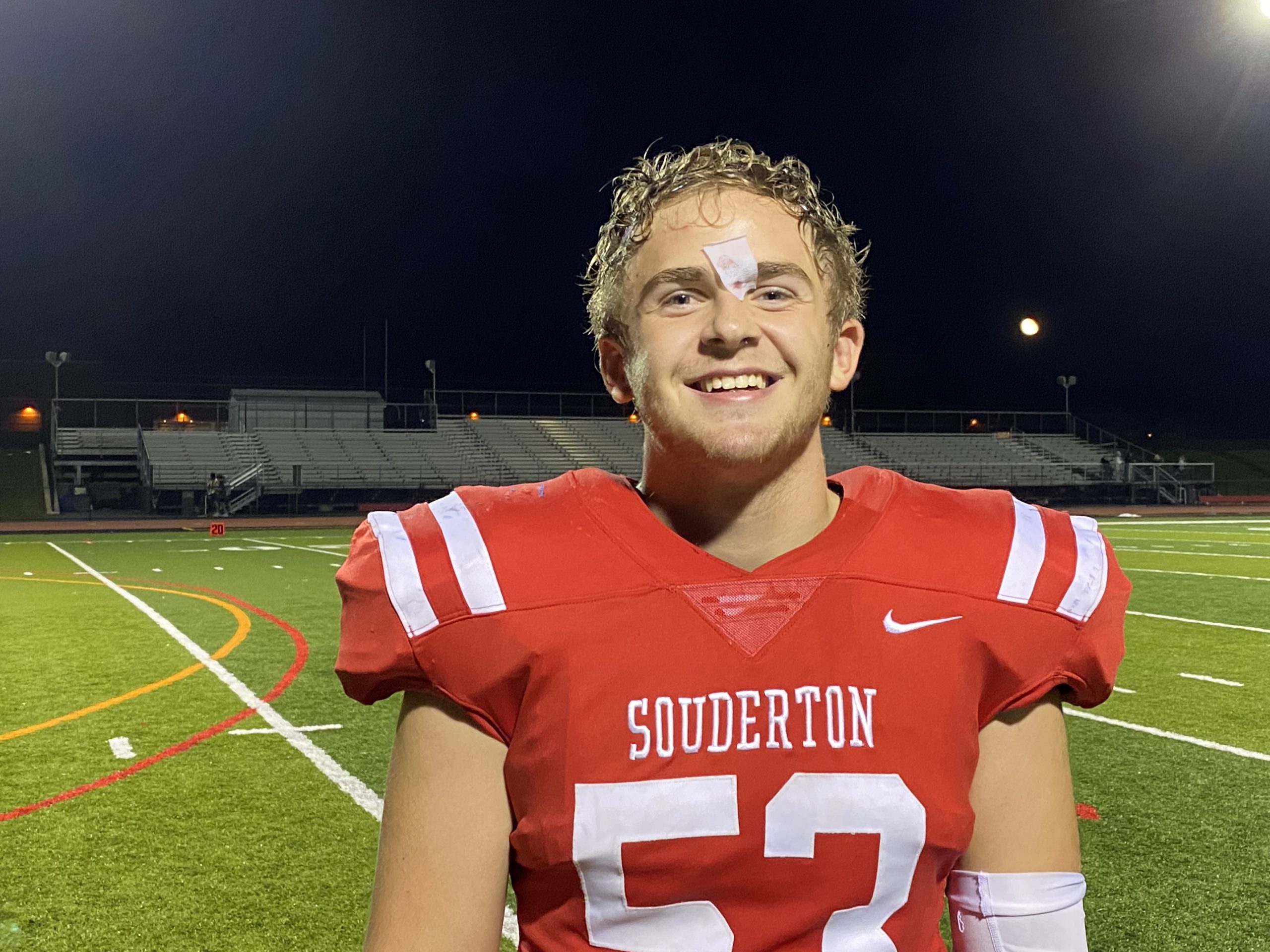 FRANCONIA >> Souderton went back to basics and back to winning football Friday night.

Elijah Goods and Brayden Porter both ran for over 100 yards while the Indians defense did not allow Council Rock South another point after conceding a late first-half touchdown as Big Red bounced back from a loss to Neshaminy by beating the visiting Golden Hawks 35-7 to stay perfect in SOL Continental Conference play.

“I think our main weakness last week was we just had too many things going on, we had too many people that didn’t know what they were doing,” said Souderton’s Nick Curotto, a senior offensive lineman/linebacker. “There were just too much for the new people that we replaced since we had lost so many people in our key positions from last year. And we were trying to simplify the offense.

“We ran maybe five or six concepts this whole game and we really hammed them down during practice and made sure we were executing them well.”

Goods ran for a game-high 115 yards on 11 carries with Porter finished with 102 yards and two TDs on 17 carries as the Indians (3-2, 3-0 conference) found the end zone on each of their first three drives and collected a total of 257 yards on the ground to get back over .500 after their 17-6 SOL nonconference loss at Neshaminy.

“We ran Buck sweep ‘til the cows came home. We ran 121 30 times it seemed like between Elijah and Brayden from our one-back set.”

Both of Porter’s TDs came in the first quarter which ended with the Indians up 21-0. Rock South, however, cut the margin to 21-7 at the break when quarterback Matt Striffolino connected with Jake Zarnowsky down the right side for the 52-yard TD pass with just 1:31 left in the second quarter.

On the second half’s opening drive, CR South had the ball at the Souderton 45 but was stopped a yard short on a 4th-and-2. The Indians responded with a 10-play, 56-yard drive to go up 28-7 on Nate Hageman’s 1-yard quarterback sneak at 4:06 in the third.

“Eventually we got the stop that we needed, got the ball back and went down and scored so at least the offense was able to finish and get that one in there,” Gallagher said. “I felt a lot more comfortable at 28-7 than 21-7 cause again like I said 21-0 after the first quarter you felt all right we’re on a roll, we’re playing really well, let’s go, let’s run this. And credit their kids, they fought.

“They fought and they came back and scored, kept it to 21-7 at the half. We had to really grind there in the third and fourth quarters to put them away.”

The Golden Hawks (0-5, 0-3) got to the Souderton 44 on their next possession but again turned the ball over on downs. The Indians proceeded to score their fifth and final touchdown of the night on Chris Kerns’ 1-yard run 55 seconds into the fourth.

“We got better tonight which is the important thing,” Souderton coach Ed Gallagher said. “We really laid an egg last week. We just didn’t take care of the football, we didn’t come ready to play and last to a physical Neshaminy team that just took it to us upfront. We were able to get a little bit of pride back tonight. We got back after it physically, we took care of the ball much better today than we did last week, so very good step in the right direction.”

Hageman was 6-of-9 passing for 93 yards – finding Daniel Dyches four times for 73 yards – as the Indians’ win sets up a clash at rival Quakertown Friday for first place in the Continental. Quakertown joined Big Red at 3-0 in the conference with a 31-0 home win over Upper Dublin.

Striffolino threw for 139 yards, a touchdown and two interceptions on 9-of-18 passing for Council Rock South, which has lost its last nine games. Zarnowsky made three catches for 91 yards and a score.

The meeting was the first between Souderton and CR South since 2010 when the Golden Hawks topped the Indians 24-17 in the District 1-4A first round. Souderton’s victory Friday was its first over South since 2007 when it earned a 37-7 road victory.

“Feeling great, we finally got the energy back,” Curotto said. “We were kind of feeling down on ourselves last week after the tough loss where our main focus was to bring it back this week, try and ramp the energy up, try and give 100% during practices and I think that paid off and showed in our play today.”

Souderton needed just five plays to go 63 yards and take a 7-0 lead on the game’s opening series – Porter bursting through the middle, spinning out off a tackle attempt and getting across the goal line for a 28- yard score at 9:18 in the first quarter.

A Sean McGoldrick interception set the Indians up at the South 27 but after throwing incomplete on a 3rd-and-7 from the eight the Indians were set to try a 27-yard field goal. A low snap that bounced off the turf did not allow Big Red to get the kick off but holder Jared Zimmerman rolled left then raced to the left corner of the end zone for an 8-yard TD run at 6:09 for a 14-0 lead.

“He was ready to throw it then all of a sudden he saw you know what he might not be that open and he made an athletic play,” Gallagher said. “Jared’s a really good athlete, unfortunately he’s in a class where we have a ton of really good athletes and he’s getting more of an opportunity to play now cause a lot of the kids in his class are hurt.”

After a South three-and-out, Souderton made it 21-0 in the first quarter’s final minute, Porter scoring on a 1-yard run at 31.5 seconds.

A 17-play Golden Hawks drive ended with a Caleb Hageman interception on a 3rd-and-15 at the Souderton 25. The Indians, however, turned the ball over on downs at the Rock South 46 and three plays later Striffolino hit Zarnowsky for a 52-yard TD pass with 91 seconds left before halftime.

CR South had two third-quarter drives into Souderton territory but both ended with the Hawks turning the ball over on downs. The Indians followed both fourth-down stops with touchdowns to push their lead to 35-7.

“It was a big change from our traditional defense where it’s kind of read and react kind of style,” Curotto said. “This week, because there was so many options, everyone had a specific responsibility and I think our defense did a great job adapting to it cause really their only big play was that one fade.”

Big Red ran nine times on a 10-play, 56-yard drive – the lone pass a Nate Hageman 23-yard completion to Porter – with Nate Hageman scoring at 4:06 in the third on a 1-yard QB sneak

Nate Hageman connected with Dyches for 32 yards down to the South 3 to set up Souderton’s fifth TD three plays later as Kerns plowed in from a yard out at 11:05 in the fourth.