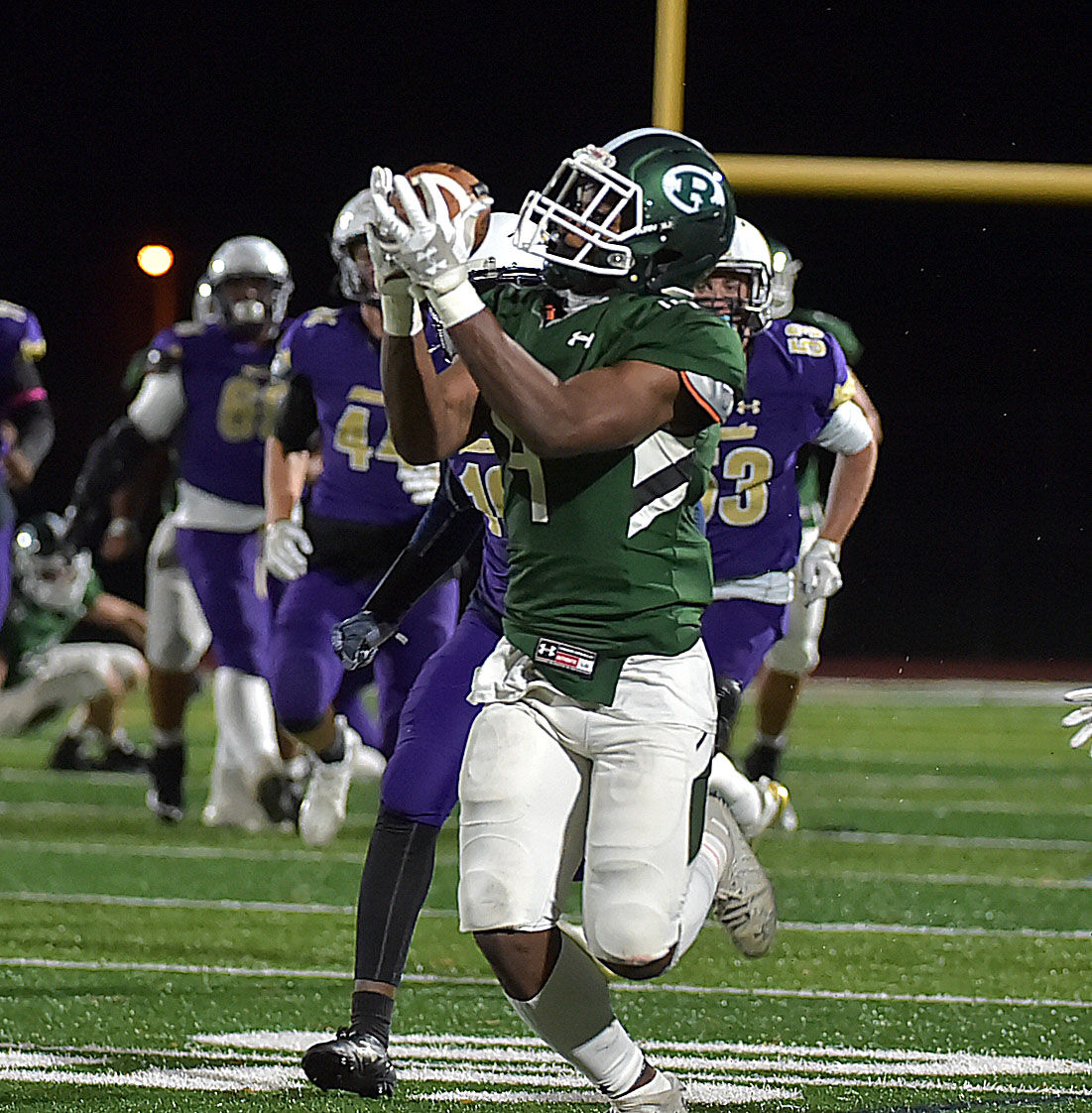 Tahir Mills has been a threat as a running back, receiver and return specialist for Ridley. (Pete Bannan/MediaNews Group)

Radnor (1-3) produced two fourth-quarter touchdowns at Springfield last week, but it was a case of too little too late. In the Raptors’ 23-14 setback, Jude Wallin passed for 162 yards and a touchdown to Tommy DeShan. Will Gallagher had three catches for 71 yards and Dante Hopson added a rushing touchdown.

While Radnor is riding a two-game losing streak, it has won its last two meetings against Ridley, including a season-ending 12-7 victory at Phil Marion Field last November.

The Green Raiders (4-0) are riding high after their fourth straight win. Senior running back Tahir Mills has been on a tear. He’s the only player in the county with at least one touchdown via run, reception and special teams. He erupted for 197 yards on the ground and three total scores against Haverford. Quarterback John Heller is also having a sensational year as a dual threat.

The Royals (1-3) were overmatched in a 61-12 loss at Garnet Valley. That’s not much of a surprise as the Jaguars have been utterly dominant against everyone in 2021. UD will look to get back on track with a performance similar to the one it put forth two weeks ago against Radnor. The defense racked up six sacks that day en route to a 17-0 victory.

As was the case at Garnet Valley, the Royals defensive secondary will be tested against the Cougars (2-2), who have one of the top pass offenses in Delco. Robby Longo scored on a 68-yard slant and Zach Tropiano had a 51-yard scoring catch from gunslinging QB Jake Rama in the win over Radnor.

The Tigers (2-2) snapped a two-game skid with a 21-9 win over Penncrest. Senior Charlie Box ran for 197 yards, including a 75-yard gainer, and three touchdowns.

The Fords (2-2) look to rebound from back-to-back losses against Central League unbeatens Strath Haven and Ridley. Tommy Wright threw for 174 yards and two TDs in a 45-21 loss at Ridley. Junior wide receiver Ethan Mahan continued his torrid stretch with seven receptions for 80 yards. Collin Cassidy rushed for 101 yards and a score.

The Knights (3-0) had a bye week after postponing its Del Val League opener with Chichester last Friday. The team was forced to close Friday due to allegations of a potential threat on high school grounds, which shut down all athletic events through the weekend. Efforts to reschedule the game at Chichester were unsuccessful and the game was declared a cancelation this week.

As for the Knights … well, they’ve been excellent when on the field, outscoring the opposition 125-13. Quarterback Darrell Fields has thrown for five touchdowns. Wide receivers Eric Willis and Khalil Greenwood have three TD catches apiece. Running back/linebacker Ibrahim Sanogo is the team’s top performer on both sides of the ball.

It’s obvious the Vanguards (2-2) are making strides under rookie head coach Ernie Ellis. Although SV was outclassed by an undefeated Unionville squad, 41-13, there is plenty of optimism surrounding the program after several lean years. Todd Harper has been a playmaker in the first month. Last week against Unionville the junior ripped off a 61-yard touchdown run.

The Clippers (4-0) survived a hellacious effort by Interboro (1-3) last week…just barely. It required a walk-off touchdown pass to Will Smith from quarterback Isaiah Freeman, who finished 14 of 19 for 246 yards and three scores. Smith had four catches for 84 yards.

The Hornets (4-1) already have two wins against Delco teams. They edged Radnor 22-21 in overtime and routed Sun Valley 32-12. Last week they handled West Chester East, 21-14, and totaled 373 yards of offense.