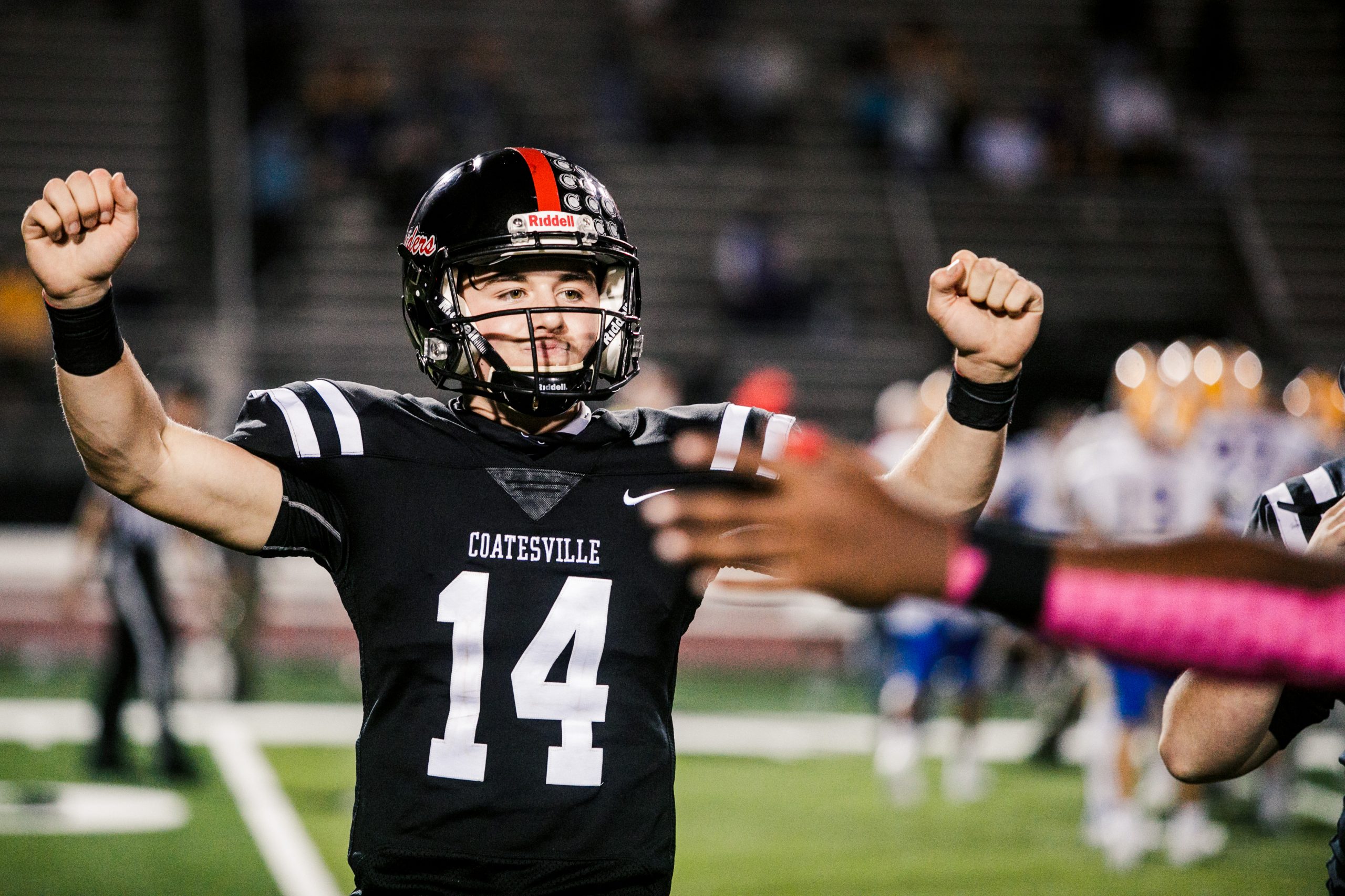 CALN >> Coatesville and West Chester Henderson have been playing football for more than a century, but a record was set in the longtime series on Friday for the most lopsided outcome ever.

The visiting Warriors had the misfortune of catching the Red Raiders on a day that they put it all together on both sides of the ball for the first time during the 2021 season. It resulted in a 48-0 decision for Coatesville that was every bit as lopsided as the score indicates.

“This is how it should be every game, where both sides of the ball are playing at our best,” said Raiders’ junior quarterback Harrison Susi. “And when we do that you can see that we are a very dangerous team.

“If we keep playing this way, I think we can run the table in District 1 and make states.”

With Susi leading the way, the Coatesville offense scored touchdowns on four of its first five possessions, which was quite a turnaround from a rather lackluster performance a week earlier at Avon Grove. Not to be outdone, the defense notched its second consecutive shutout against Ches-Mont competition and also delivered a pair of pick-sixes for good measure.

“We talked about that at halftime,” said Raiders’ head coach Matt Ortega. “We came out and took care of business on both sides of the ball. That’s what you are hoping for when you get to the middle part of the season.”

Since dropping a high scoring affair against William Penn of York, Coatesville (4-1 overall) has outscored its last two foes 83-0. They will be heavy favorites against all Ches-Mont National foes until a regular season-ending showdown against Downingtown East.

“After the loss against (William Penn of) York, our focus was to get back to the fundamentals,” Ortega pointed out. “Our goal right now is to get better every week, and we came out here (tonight) and got better. That’s what it’s about.”

Just a week after a promising 38-14 victory against Great Valley, Henderson (2-3 overall) bottom out with just 67 rushing yards, 141 total yards and a 3-1 deficit in turnovers.

“We preached to our guys about being competitive each week and that flat-out just didn’t happen tonight,” said Warriors’ head coach John Lunardi.

“I felt like we had a good week of practice, but quite frankly we got out-coached and out-played. We just have to put this behind us because we have a lot of football to play.”

Susi exited the game for good before halftime, but he had a hand in four of the Raiders first five TDs, including his first-ever as a defensive back. After opening the game with a nine-yard scoring run, Susi picked off a Henderson pass and went 37-yards the other way to the end zone.

“That was my first play on defense since little league football, and the first interception I’ve ever had in my life,” he said.

It was 14-0 early, but in the second quarter it only got worse for Henderson. Runner Bryan Lacey scored on a six-yard run, but on the next series he hobbled off the field with an ankle injury. He had already amassed 118 yards on nine carries.

The following two possessions concluded with touchdown passes by Susi, the first a nine-yarder to Dowayne Molina and the second a 44-yard strike to Lebron Bessick. And then just before the end of a 28-point quarter, Coatesville linebacker Joshua Miller swiped another errant pass and returned it 43 yards for the score to make it 42-0 at the intermission.

“This was the most explosive start we’ve had all season,” Susi said. “And the defense is playing great the last two games. I feel very confident for our remaining five games.”

The Raiders even won the second half despite playing all backups. With the Warriors threating to score, defensive lineman Davion Pierce forced a fourth quarter Henderson fumble, and a couple plays later sophomore runner Damon Watson went 70 yards to round out the scoring.

“You look forward to games where you have the opportunity to get your young guys some reps,” Ortega said.

“(Coatesville) played hard and physical, and executed — and we didn’t,” Lunardi said. “All we can do is look at ourselves in the mirror from the coaches on down.”

The only downside of the contest for the Raiders was the injury to Lacey, and an early elbow injury to defensive lineman Ryan Massey in the first quarter. He was taken off the field in a stretcher.

“We had two seniors (injured) but we are hoping for some good news on that,” Ortega said.

Things definitely began to snowball for the Warriors. The previous record for most lopsided loss to Coatesville was 47-0 back in 2000.

“We really couldn’t get anything going offensively,” Lunardi said. “They got up on us early and we just couldn’t recover.”