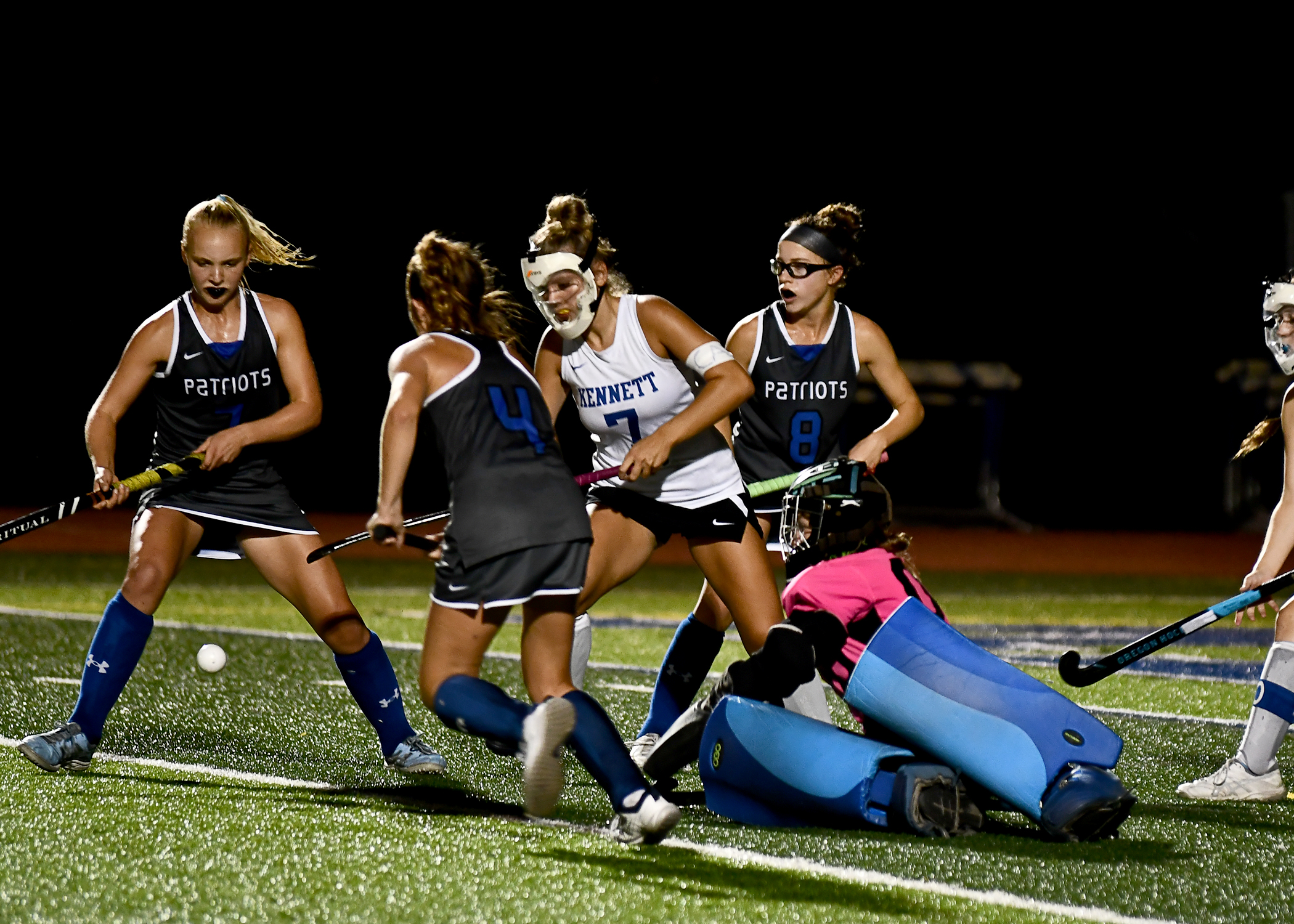 KENNETT SQUARE—Since taking a non-league loss to a tough Conestoga team in its first game of the season, the Great Valley field hockey team has been hot, winning four straight. The Patriots have been downright dominant in that stretch, outscoring the opposition 37-1. But Tuesday night presented a new challenge, when they squared off against an unbeaten Kennett squad in a key Ches-Mont American division contest.

For much of the first three periods, it was about as close as could be expected with two teams battling for the top spot in the division, and was tied 1-1 late in the third before the Patriots (5-1 overall, 3-0 league) notched a pair of unanswered goals to hand Kennett (5-1, 3-1) their first loss of the season by a score of 3-1.

It didn’t take long for the Patriots to get on the board. On its first possession, the first of the game for either team, the Patriots moved the ball into the circle, getting the ball to Sydney Lavin. Lavin unleashed a shot, and found the back of the cage for a 1-0 Great Valley lead.

But Kennett answered right back, three minutes later when CJ Herring grabbed a ball in a crowd and slipped it past the Patriot defense and into the back of the cage. Unfortunately for the Blue demons, that would be the last time

“We definitely have to step to the ball more,” said Kennett coach Meghan Shumway. “Great Valley was aggressive and used their speed well to beat us to the ball..”

The Blue Demons seemed to be finding a rhythm coming out of the halftime break, and were controlling the action for much of the third period, forcing a couple of corners, but coming up empty.

“We definitely had our opportunities,” said Shumway. “We just have to play with a little more grit when were in front of the goal. We let them clear too many balls too easily.”

There was a clear momentum shift late in the period. Eva Nemeth brought the ball inside the circle, and unleashed a low-flying bullet of a shot to the right hand side of the cage, where it banged off the back board to give her team a 2-1 lead that was all it would need. Nadia Nemeth scored the final goal, with under two minutes to play.

“We really stayed composed all game,” said Nemeth. “I was actually just practicing that shot yesterday, and just brought it with me today. Last year, we lost both of our games to Kennett, so it feels really good to come in here and get a win.”

Great Valley outshot Kennett by an 18-7 margin, and goalie Katie Hanlon was only called up to make five saves, thanks to a stellar defensive effort by the Patriot backs.

“We always seem to start slow in the first half,” said Pats defender Kennedy Graham. “But we stayed composed, and once we got the momentum, we kept it up. We’re playing well all over the field, with our in and out passes, just anywhere. I think we are all working hard to keep the winning streak alive.”