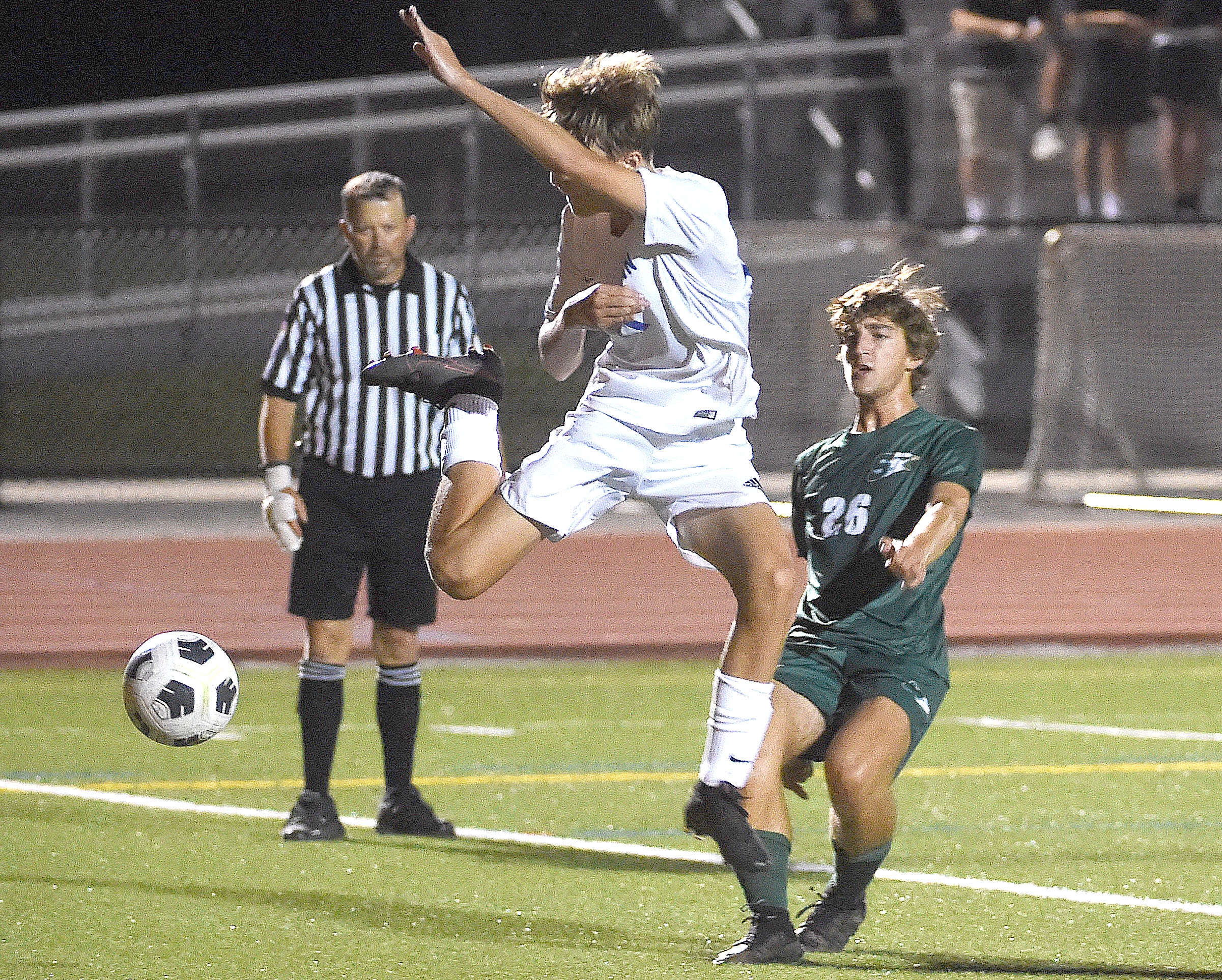 DOWNINGTOWN >> It only made sense. Bishop Shanahan senior striker Zane Domsohn was all over the field on Tuesday evening against Ches-Mont rival Downingtown West, orchestrating a whole bunch of serious scoring threats.

So when the host Eagles notched the game-winner in the first minute of the second overtime, who could blame Shanahan head coach Jim Kalavik from thinking that it was Domsohn who booted in the difference in a 2-1 boys’ soccer marathon at Jack Mancini Field?

Afterwards, after a wild celebration of the critical win against the previously unbeaten Whippets, Domsohn set the record straight.

Colin, as in senior Colin Deal. The two-way midfielder was actually the one who corralled a rebound and put it into the back of the net with 9:02 on the clock in double OT to give the Eagles a huge boost in their quest to at least contend for the Ches-Mont championship.

“This was a must win, for us to have any shot at the Ches-Mont (crown),” Kalavik said.

“We battled the entire time until the end,” Zane Domsohn added. “We don’t give up and if we just keep pushing, we can compete with anyone.”

Now 3-1 in the league (5-2 overall), Shanahan is still in the title chase along with prime contenders like unbeaten West Chester Henderson and Downingtown West (4-1, 6-1).

“We knew this was going to be our first really good test,” said first-year West head coach Joe Sales. “I thought my guys handled it all pretty well – it was a good fight.

“It’s unfortunate that a deflection in the second overtime decided it.”

The Whippets entered the contest having outscored its opponents 23-1. But the Eagles peppered West keeper Aiden Primanti with 23 shots on goal. He stopped 21 of them, and the Shanahan defense also had to deal with nine corner kicks and managed to turn aside them all.

“This victory was all heart,” Kalavik said. “Our boys are motivated. We have something to play for.”

It is actually somebody: senior defender Michael McGonagle, who was lost for the season with an ankle injury and subsequent surgery. Kalavik described him as the teams ‘heart and soul.’

The Eagles finished with a lopsided 21-7 edge in shots on goal, but needed Deal’s overtime heroics to finally win it. Junior Paul Ziegler started the sequence with a blast from the left side that Primanti was able to steer away, but it went directly to Deal, who was hanging out near the opposite post.

“West’s keeper did everything he could to save it. But we’ve been running that far post all season long,” Kalavik explained.

“Downingtown West is extremely athletic and their center backs are phenomenal. We thought where we could best get our chances was to play into the space around them, and both of our goals were scored by getting to their flank.”

It was a highly competitive first half as well even though the Whippets had just one shot on goal and the Eagles had a 6-1 deficit in corner kicks in the opening 40 minutes. Senior midfielder Kyle McWilliams put the Whippets ahead about 33 minutes in on a penalty kick, left-footing it to the near corner.

But less than two minutes later Shanahan tied it when senior Anthony D’Addezio took a centering pass from Ziegler and found the open net. Both sides had nice early scoring chances, and Zane Domsohn had three of the best. But Whippets keeper Aiden Primanti was up to the challenge.

In the second half, Domsohn had a couple more prime chances, and then he very nearly ended it in the opening minute of the first overtime when Primanti got a finger (or two) onto his shot and it just missed the far post.

“Primanti did a really good job in goal,” Domsohn said.

“Especially in the big games, Zane bring a little extra,” Kalavik added. “It looked like (Downingtown West) was doubling him which helped us because it opened up the rest of the field for us to run into the space.”

The Whippets also had a chance to end it in the first OT when Matthew Lohr headed it towards the cage and Shanahan goalie Bryce Domsohn made a leaping save with West’s Alex Ade inches away.

In all, Downingtown West had a 9-2 advantage in corner kicks, but were unable to turn all of those chances into much in the way of scoring threats.

“That’s something we need to work on,” Sales said. “Give (Shanahan) credit. They had a game plan and they executed it.”

According to Kavalik, it was no coincidence that Ziegler was at the heart of both goals by the Eagles.

“Paul had two calf cramps going into the end of regulation,” he pointed out. “He came off after the first overtime and told me he wasn’t coming off the field until he was on the ground.

It all amounted to a contest that Shanahan needed desperately, especially after falling to West Chester Henderson 3-0 on Sept. 13.

“Once we lost to Henderson, this one became really big,” Zane Domsohn said. “We knew we needed to win this game.”