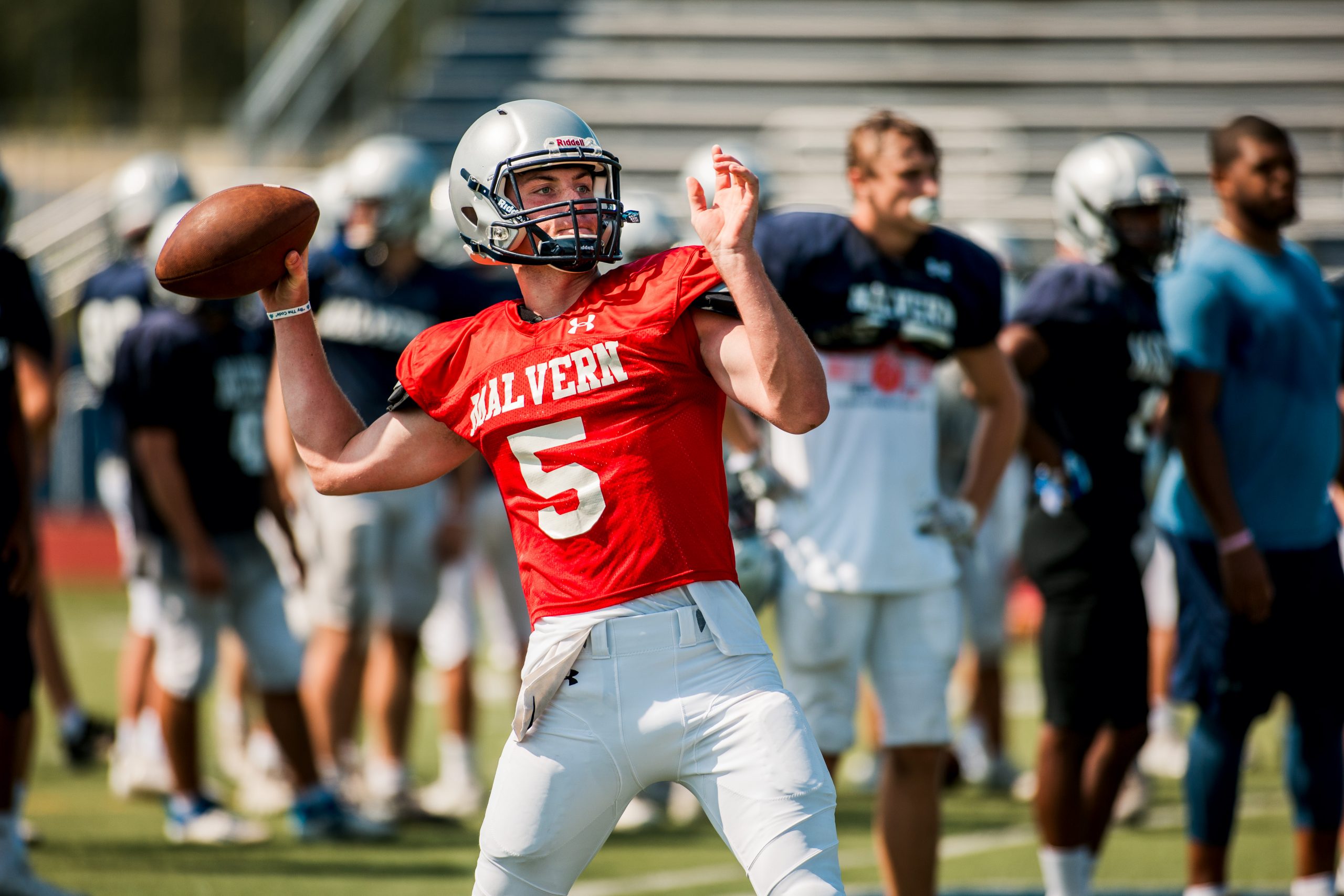 @PeteDLNontwitter
Week four of the scholastic football season is in the books and there were many impressive performances on area gridirons. But none any more impressive than Malvern Prep taking apart Archbishop Wood 21-0. It was not just a shutout victory for the Friars but a dominating win over a previously undefeated and highly regarded foe that had blown through its first three opponents made the win even more impressive.
Malvern Prep head coach Dave Gueriera and his entire staff, led by defensive coordinator, Joe Carr, had every answer for the Vikings offense that was averaging over 34 points per game going into the clash at Franklin Field. After the dominant win, Gueriera spoke about how the Friars thought they let one get away in week one when they bowed to LaSalle 10-7. Anybody who underestimated the Friars before Saturday’s game against the Vikings, better have their eyes open now.
Senior tackle Coltin Deery, who is a University of Maryland recruit was dormant as was Ryan Davis and Colin mcHugh. and the Malvern Prep secondary led by Isaiah Wright and D’Angelo Stocker not only defended deep, they were essential in the run stoppage for Joe Carr’s defense.
Downingtown East came away with a 28-13 win over Bishop Shanahan Friday night at Kottmeyer Stadium. the big story was twofold. One, Cougar junior running back Bo Horvath carried the football 36 times for 224 yards and a touchdown. Horvath thrives on the heavy workload and with fellow running back josh Asante sidelined by injury, Horvath is the main man for the run dominant Cougar attack.
The other tale of the game was the way Bishop Shanahan came back from a 21-0 deficit after the first period and made a game of it. Two late turnovers killed any chance of a Bishop Shanahan upset but Eagles head coach Paul Meyers has to like the way his team fought back and avoided a lopsided loss. Eagles quarterback Cooper Jordan threw for 251 yards and rushed for another 88 yards and played defense and kickoff team coverage also.
Oxford is now 3-1 and how many times in the last 20 years could you say that. Not many times, but current Oxford head coach Mike Means has slowly but surely turned around the program. the Hornets went on the road and defeated West Chester East 21-14 Friday night. the Oxford defense has been strong all seasoned the Hornets face another road test this coming Saturday against a very improved Chester squad.
Coatesville bounced back from two rough defensive performances to down Avon Grove 35-0. The Red Raider defense completely shut down the Red Devils offense and senior receiver Lebron Bessick scored three first half touchdowns. The Red Raiders host West Chester Henderson Friday.
Around District 1, North Penn defeated the defending District 1 5A champion, Upper Dublin, to move the Knights to 4-0 and to the top of the District 1 6A playoff point race. The Knights face Pennridge Friday night and the Rams may be the only team in the Knights path to an undefeated regular season.
Garnet Valley put up 62 points on Upper Darby and the Jaguars continue their assault on the beleaguered Central League. big test for Garnet Valey comes this week against Strtah-Haven, the only team in the Central League that may be able to stay with the Jags offense.
Chesco Super Seven
1.Malvern Prep. 2. Downingtown East. 3. Coatesville. 4. Unionville. 5. W.C. Rustin. 6. Downingtown West 7. Bishop Shanahan.
EOF-